Read an excerpt from The Ends of the Earth – Abbie Greaves’s captivating new novel about a woman who can’t let go of her greatest love
More about the book! 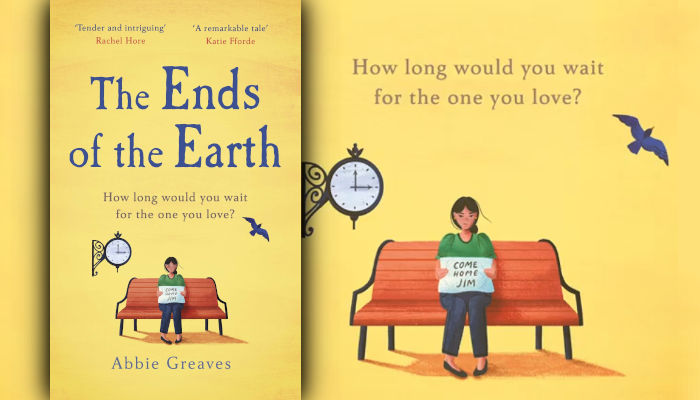 Penguin Random House has shared an extract from The Ends of the Earth by Abbie Greaves, the bestselling author of The Silent Treatment.

How long would you wait for the one you love?

Mary O’Connor has been keeping a vigil for her first love for the past seven years.

Every evening without fail, Mary arrives at Ealing Broadway station and sets herself up among the commuters. In her hands Mary holds a sign which bears the words: ‘Come Home Jim.’
Call her mad, call her a nuisance, call her a drain on society – Mary isn’t going anywhere.

That is, until an unexpected call turns her world on its head. In spite of all her efforts, Mary can no longer find the strength to hold herself together. She must finally face what happened all those years ago, and answer the question – where on earth is Jim?

The breath-taking new novel from the author of The Silent Treatment – for fans of Jojo Moyes, Joanna Cannon and Ruth Jones.

Mary can remember exactly where she was standing, the moment she first saw James. Not because of fate or the fixing point of Cupid’s arrow, or some other nonsense she didn’t have the head or time for. No, she remembers it because that was the very spot where, seconds before, she had knocked half a casserole dish of coq au vin down her best white shirt.

The timing couldn’t have been worse. There was less than half an hour to go until the bride and groom arrived for the reception, and they had paid more than enough to ensure that their head waitress wasn’t dressed in their wedding supper. Plus, the sauce was scalding. It was bad enough working a July wedding in full uniform, without adding a burn into the equation.

Mary pulled the cotton away from her bra to cool her skin, aware that half her breasts were now on show – she was wearing one of those absurdly skimpy balconette ones that Moira had persuaded her to buy. She glanced up to check no-one was about.

‘You alright there?’ the man in the doorway called.

Who on earth was he? Not one of the caterers. Mary would have clocked if one of them looked like an off-duty model. Was he a wedding guest? No – he was far too early and he wasn’t dressed for that, in slacks and one of those shirts purposefully manufactured without the collar.

Who knew men’s catwalk fashion could make it as far as the Stormont Hotel, Belfast? Certainly not Mary.

There was an ungainly plop as a plum tomato toppled from its temporary perch on her left breast and onto the carpet.

The man suppressed a laugh and flicked his tongue to the corner of his lips. He had the sort of stubble that Mary had heard the girls behind reception describe as ‘designer’, in whispers, after the well-heeled stag parties had been checked in. She had never seen the appeal, until just now.

‘Can I help you?’ she asked. She felt embarrassed, yes, but her indignation was tempered by a ferocious curiosity about the stranger who was making his way towards her. He hadn’t broken eye contact once.

‘Yes, you. Who else would be watching and not saying a word?’

He smiled again, wider, this time with a confidence that suggested he had seen plenty of women with their tops soaked through before.

‘I didn’t mean you had to help.’ Mary suddenly realised she had overstepped the mark – after all, who was she, to be asking a guest here to clean up? ‘It’s my fault anyway.’

An English guest too.

‘For the wedding?’ Mary nodded her head in the direction of the seating plan, perched on an easel in the corner of the function room.

‘I wish! I’m here for a conference. Surgeons? ENT specialists.’

Really? He looked a bit older than Mary herself, who, at twenty-seven, thought she had more than enough life experience to be able to age a man accurately. He could be mid-thirties, at a push? That might explain the confidence. Maybe also that knowing look, the crinkles at the corners of his eyes. He was still staring, his gaze hungry. It was almost savage.

What was that he said? Mary hoped she hadn’t started hearing things in the midst of whatever mania had come over her.

The man took a couple of steps, stopping in front of an errant chicken thigh and about two yards away from Mary. It was a long time since she had seen eye-to-eye with a man; most local Belfast men tended to come up to her shoulders, or thereabouts. She estimated that this Englishman had a good three inches on her: perfect height to do up his top button, if only he had one.

‘Are you sure you don’t want a hand?’

Mary allowed herself a second or two to look him in the eyes – pools of rich, warm hazel that reminded her of licking the chocolate-spread knife. There was something playful about his features too. A scar sliced through the hair on his left eyebrow. She was desperate to find out how he had acquired it.

Her hands trembled around the oven mitt. ‘No, sure I’m grand. But thanks for your trouble all the same.’

For the love of God why had she said that? Mary didn’t want this to be the last she saw of him. It couldn’t be. But what was the alternative? She had a function to prepare for and a shirt to change.

He made to move. But instead of leaving, he picked up the stray chicken thigh. He tore into the meat with all the relish of a dog lost for a week in the wilderness.

Mary was so shocked that, even as he made his way to the exit, she didn’t move an inch. She was so shocked that when he turned, just as he rounded into the corridor and poked his head back around the door frame to ask her name, she answered.