Read an excerpt from Taylor Jenkins Reid’s new novel Malibu Rising – one of the most anticipated books of the year
More about the book! 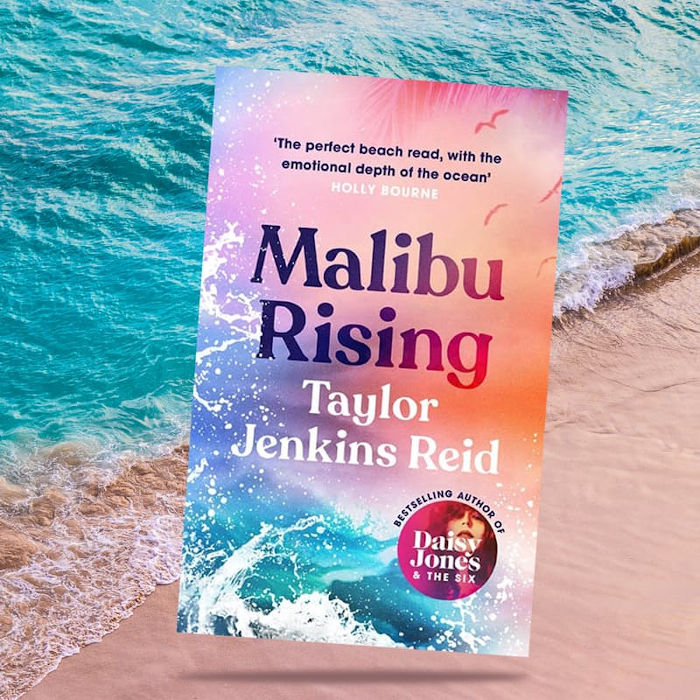 Reid is the author of seven novels, including Daisy Jones & The Six and The Seven Husbands of Evelyn Hugo. She lives in Los Angeles with her husband and their daughter.

Malibu Rising is a story about one unforgettable night in the life of a family: the night they each have to choose what they will keep from the people who made them … and what they will leave behind.

Four famous siblings throw an epic party to celebrate the end of the summer. But over the course of 24 hours, their lives will change forever.

Malibu: August 1983. It’s the day of Nina Riva’s annual end-of-summer party, and anticipation is at a fever pitch. Everyone wants to be around the famous Rivas: Nina, the talented surfer and supermodel; brothers Jay and Hud, one a championship surfer, the other a renowned photographer; and their adored baby sister, Kit. Together the siblings are a source of fascination in Malibu and the world over – especially as the offspring of the legendary singer Mick Riva.

The only person not looking forward to the party of the year is Nina herself, who never wanted to be the centre of attention, and who has also just been very publicly abandoned by her pro tennis player husband. Oh, and maybe Hud – because it is long past time for him to confess something to the brother from whom he’s been inseparable since birth.

Jay, on the other hand, is counting the minutes until nightfall, when the girl he can’t stop thinking about promised she’ll be there.

And Kit has a couple secrets of her own – including a guest she invited without consulting anyone.

By midnight the party will be completely out of control. By morning, the Riva mansion will have gone up in flames. But before that first spark in the early hours before dawn, the alcohol will flow, the music will play, and the loves and secrets that shaped this family’s generations will all come rising to the surface.

Our family histories are simply stories. They are myths we create about the people who came before us, in order to make sense of ourselves.

The story of June and Mick Riva seemed like a tragedy to their oldest child, Nina. It felt like a comedy of errors to their first son, Jay. It was an origin story for their second son, Hud. And a mystery to the baby of the family, Kit. To Mick himself it was just a chapter of his memoir.

But to June, it was, always and forever, a romance.

Mick Riva first met June Costas when she was a seventeen-year-old girl on the shores of Malibu. It was 1956, a few years before the Beach Boys got there, mere months before Gidget would begin to beckon teenagers to the waves in droves.

Back then, Malibu was a rural fishing town with only one traffic signal. It was quiet coastline, crawling inland by way of narrow wind­ing roads through the mountains. But the town was coming into its adolescence. Surfers were setting up shop with their tiny shorts and longboards, bikinis were coming into fashion.

June was the daughter of Theo and Christina, a middle-class couple who lived in a two-bedroom ranch home off one of Malibu’s many canyons. They owned a struggling restaurant called Pacific Fish, slinging crab cakes and fried clams just off the Pacific Coast Highway. Its bright red sign with cursive type hung high in the air, beckoning you from the east side of the highway to look away from the water for just one moment and eat something deep fried with an ice-cold Coca-Cola.

Theo ran the fryer, Christina ran the register, and on nights and weekends, it was June’s job to wipe down the tables and mop the floors.

Pacific Fish was both June’s duty and her inheritance. When June’s mother vacated that spot at the counter, it was expected that it would be June’s body that filled it. But June felt destined for bigger things, even at seventeen.

June beamed on the rare occasion that a starlet or director would come into the restaurant. She could recognize all of them the second they walked in the door because she read the gossip rags like bibles, appealing to her father’s soft spot to get him to buy her a copy of Sub Rosa or Confidential every week. When June scrubbed ketchup off the tables, she imagined herself at the Pantages Theatre for a movie premiere. When she swept the salt and sand off the floors, she wondered how it might feel to stay at the Beverly Hilton and shop at Robinson’s. June marveled at what a world the stars lived in. Just a few miles away and yet impossible for her to touch because she was stuck serving french fries to tourists.

June’s joy was something she stole between shifts. She would sneak out at night, sleep in when she could. And, when her parents were at work but did not yet need her, June would cross the Pacific Coast Highway and rest her blanket in the expanse of sand opposite her family’s restaurant. She would bring a book and her best bathing suit. She would fry her pale body under the sun, sunglasses over her eyes, eyes on the water. She would do this every Saturday and Sun­day until ten-thirty in the morning, when reality pulled her back to Pacific Fish.

One particular Saturday morning during the summer of ’56, June was standing on the shoreline, her toes in the wet sand, waiting for the water to feel warmer on her feet before she waded in. There were surfers in the waves, fishermen down the coast, teens like her laying out blankets and rubbing lotion on their arms.

June had felt daring that morning and put on a blue gingham strapless bikini. Her parents had no idea it even existed. She’d gone into Santa Monica with her girlfriends and had seen it hanging in a boutique. She’d bought it with money she’d saved from tips, borrow­ing the last three dollars from her friend Marcie.

She knew if her mother saw it, she’d be forced to return it or worse yet, throw it out. But she wanted to feel pretty. She wanted to put out a signal and see if anyone answered.

June had dark brown hair cut into a bob, a button nose, and pert bow lips. She had big, light brown eyes that held the giddiness that often accompanies hope. That bikini held promise.

As she stood at the shoreline that morning, she felt almost naked. Sometimes, she felt a little guilty about how much she liked her own body. She liked the way her breasts filled out her bikini top, the way her waist pulled in and then ebbed out again. She felt alive, standing there, partially exposed. She bent down and ran her hands through the cold water rising up to her feet.

A twenty-three-year-old, as-yet-unknown Michael Riva was swimming in the surf. He was with three of the friends he’d made while hanging out in the clubs of Hollywood. He’d been in L.A. for two years, having left the Bronx behind, running west in search of fame.

He was finding his footing coming out of a wave when his gaze fell on the girl standing alone along the shore. He liked her figure. He liked the way she stood there, shy and companionless. He smiled at her.

June smiled back. And so Mick ditched his friends and headed toward her. When he finally made his way over, a drop of ice-cold water fell from his arm onto hers. She found herself flattered by his attention even before he said hello.

Mick was undeniably handsome with his hair slicked back from the ocean, his tan, broad shoulders shining in the sun, his white swimming trunks fitting him just so. June liked his lips—how the bottom was so full it looked swollen, and the top was thinner and had a perfect little v in the center.