Read an excerpt from No Middle Name, The Complete Collected Jack Reacher Stories
More about the book! 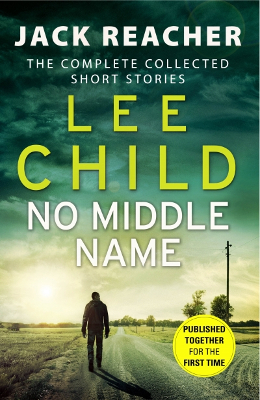 The complete Jack Reacher short stories, from number one bestseller Lee Child, have been published together for the first time in No Middle Name!

Jack ‘No Middle Name’ Reacher, lone wolf, knight errant, ex-military cop, lover of women, scourge of the wicked and righter of wrongs, is the most iconic hero for our age. Read together, these 12 stories shed new light on Reacher’s past, illuminating how he grew up and developed into the wandering avenger who has captured the imagination of millions around the world.

The book includes a brand new novella, ‘Too Much Time’, as well as ‘Second Son’, ‘James Penney’s New Identity’, ‘Guy Walks Into a Bar’, ‘Deep Down’, ‘High Heat’, ‘Not a Drill’ and ‘Small Wars’, which have, until now, only been available as ebook shorts. Added to these is every other Reacher short story that Child has written – ‘Everyone Talks’, ‘Maybe They Have a Tradition’, ‘No Room at the Motel’ and ‘The Picture of the Lonely Diner’.

Read an excerpt from ‘Too Much Time’, courtesy of Dead Good:

Sixty seconds in a minute, sixty minutes in an hour, twenty-four hours in a day, seven days in a week, fifty-two weeks in a year. Reacher ballparked the calculation in his head and came up with a little more than thirty million seconds in any twelve-month span. During which time nearly ten million significant crimes would be committed in the United States alone. Roughly one every three seconds. Not rare. To see one actually take place, right in front of you, up close and personal, was not inherently unlikely. Location mattered, of course. Crime went where people went. Odds were better in the centre of a city than the middle of a meadow.

Reacher was in a hollowed-out town in Maine. Not near a lake. Not on the coast. Nothing to do with lobsters. But once upon a time it had been good for something. That was clear. The streets were wide, and the buildings were brick. There was an air of long-gone prosperity. What might once have been grand boutiques were now dollar stores. But it wasn’t all doom and gloom. Those dollar stores were at least doing some business. There was a coffee franchise. There were tables out. The streets were almost crowded. The weather helped. The first day of spring, and the sun was shining.

Reacher turned into a street so wide it had been closed to traffic and called a plaza. There were café tables in front of blunt red buildings either side, and maybe thirty people meandering in the space between. Reacher first saw the scene head-on, with the people in front of him, randomly scattered. Later he realized the ones that mattered most had made a perfect shape, like a capital letter T. He was at its base, looking upward, and forty yards in the distance, on the crossbar of the T, was a young woman, walking at right angles through his field of view, from right to left ahead of him, across the wide street direct from one sidewalk to the other. She had a canvas tote bag hooked over her shoulder. The canvas looked to be medium weight, and it was a natural colour, pale against her dark shirt. She was maybe twenty years old. Or even younger. She could have been as young as eighteen. She was walking slow, looking up, liking the sun on her face.