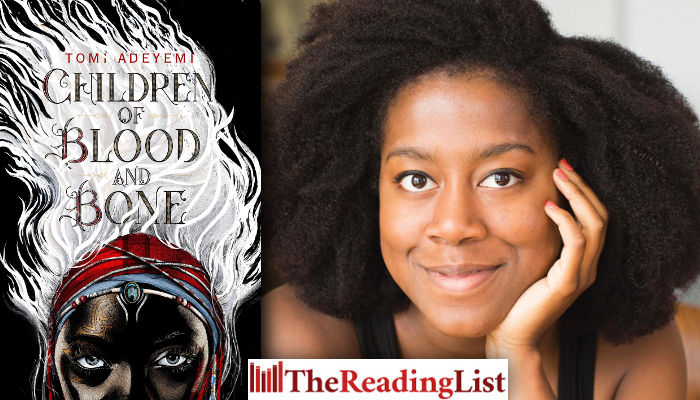 Tomi Adeyemi’s Children of Blood and Bone is a West African Fantasy about a girl who must fight against the monarchy to bring magic back to her people.

They killed my mother.
They took our magic.
They tried to bury us.
Now we rise.

Adeyemi is a Nigerian–American writer and creative writing coach based in San Diego, California. After graduating from Harvard University with an honours degree in English literature, she studied West African mythology and culture in Salvador, Brazil.

The movie of her debut novel, Children of Blood and Bone, is in development at Fox 2000/Temple Hill Productions with the incredible Karen Rosenfelt and Wyck Godfrey (Twilight, Maze Runner and The Fault In Our Stars) producing it.

Children of Blood and Bone is out now from Pan Macmillan.

But everything changed the night magic disappeared. Under the orders of a ruthless king, anyone with powers was targeted and killed, leaving Zélie without a mother and her people without hope. Only a few people remain with the power to use magic, and they must remain hidden.

Zélie is one such person. Now she has a chance to bring back magic to her people and strike against the monarchy. With the help of a rogue princess, Zélie must learn to harness her powers and outrun the crown prince, who is hell-bent on eradicating magic for good.

Danger lurks in Orïsha, where strange creatures prowl, and vengeful spirits wait in the waters. Yet the greatest danger may be Zélie herself as she struggles to come to terms with the strength of her magic – and her growing feelings for an enemy.

It’s all I can do not to scream. I dig my nails into the marula oak of my staff and squeeze to keep from fidgeting. Beads of sweat drip down my back, but I can’t tell if it’s from dawn’s early heat or from my heart slamming against my chest. Moon after moon I’ve been passed over.

Today can’t be the same.

I tuck a lock of snow-white hair behind my ear and do my best to sit still. As always, Mama Agba makes the selection grueling, staring at each girl just long enough to make us squirm.

Her brows knit in concentration, deepening the creases in her shaved head. With her dark brown skin and muted kaftan, Mama Agba looks like any other elder in the village. You would never guess a woman her age could be so lethal.

‘Ahem.’ Yemi clears her throat at the front of the ahéré, a not-so-subtle reminder that she’s already passed this test. She smirks at us as she twirls her hand-carved staff, eager to see which one of us she gets to defeat in our graduation match. Most girls cower at the prospect of facing Yemi, but today I crave it. I’ve been practicing and I’m ready.

I know I can win.

Mama Agba’s weathered voice breaks through the silence. A collective exhale echoes from the fifteen other girls who weren’t chosen. The name bounces around the woven walls of the reed ahéré until I realize Mama Agba’s called me.

Mama Agba smacks her lips. ‘I can choose someone else—’

The sea of brown faces parts as I move through the crowd. With each step, I focus on the way my bare feet drag against the reeds of Mama Agba’s floor, testing the friction I’ll need to win this match and finally graduate.

When I reach the black mat that marks the arena, Yemi is the first to bow. She waits for me to do the same, but her gaze only stokes the fire in my core. There’s no respect in her stance, no promise of a proper fight. She thinks because I’m a divîner, I’m beneath her.

She thinks I’m going to lose.

‘Bow, Zélie.’ Though the warning is evident in Mama Agba’s voice, I can’t bring myself to move. This close to Yemi, the only thing I see is her luscious black hair, her coconut-brown skin, so much lighter than my own. Her complexion carries the soft brown of Orïshans who’ve never spent a day laboring in the sun, a privileged life funded by hush coin from a father she never met. Some noble who banished his bastard daughter to our village in shame.

I push my shoulders back and thrust my chest forward, straightening though I need to bend. Yemi’s features stand out in the crowd of divîners adorned with snow-white hair. Divîners who’ve been forced to bow to those who look like her time and time again.

‘Zélie, do not make me repeat myself.’

With no other choice, I clench my jaw and bow, making Yemi’s insufferable smirk blossom. ‘Was that so hard?’ Yemi bows again for good measure. ‘If you’re going to lose, do it with pride.’

Muffled giggles break out among the girls, quickly silenced by a sharp wave of Mama Agba’s hand. I shoot them a glare before focusing on my opponent.

We back up to the edge of the mat and kick our staffs up from the ground. Yemi’s sneer disappears as her eyes narrow. Her killer instinct emerges.

We stare each other down, waiting for the signal to begin. I worry Mama Agba’ll drag this out forever when at last she shouts.

And instantly I’m on the defensive.

Before I can even think of striking, Yemi whips around with the speed of a cheetanaire. Her staff swings over her head one moment and at my neck the next. Though the girls behind me gasp, I don’t miss a beat.

Yemi may be fast, but I can be faster.

When her staff nears, I arch as far as my back will bend, dodging her attack. I’m still arched when Yemi strikes again, this time slamming her weapon down with the force of a girl twice her size.

I throw myself to the side, rolling across the mat as her staff smacks against its reeds. Yemi rears back to strike again as I struggle to find my footing.

‘Zélie,’ Mama Agba warns, but I don’t need her help. In one smooth motion, I roll to my feet and thrust my shaft upward, blocking Yemi’s next blow.

Our staffs collide with a loud crack. The reed walls shudder. My weapon is still reverberating from the blow when Yemi pivots to strike at my knees.

I push off my front leg and swing my arms for momentum, cartwheeling in midair. As I flip over her outstretched staff, I see my first opening—my chance to be on the offensive.

‘Huh!’ I grunt, using the momentum of the aerial to land a strike of my own. Come on—

Yemi’s staff smacks against mine, stopping my attack before it even starts.

‘Patience, Zélie,’ Mama Agba calls out. ‘It is not your time to attack. Observe. React. Wait for your opponent to strike.’

I stifle my groan but nod, stepping back with my staff. You’ll have your chance, I coach myself. Just wait your tur—

‘That’s right, Zél.’ Yemi’s voice dips so low only I can hear it. ‘Listen to Mama Agba. Be a good little maggot.’

And there it is.

Whispered with no regard. Wrapped in that arrogant smirk.

Before I can stop myself, I thrust my staff forward, only a hair from Yemi’s gut. I’ll take one of Mama Agba’s infamous beatings for this later, but the fear in Yemi’s eyes is more than worth it.

‘Hey!’ Though Yemi turns to Mama Agba to intervene, she doesn’t have time to complain. I twirl my staff with a speed that makes her eyes widen before launching into another attack.

‘This isn’t the exercise!’ Yemi shrieks, jumping to evade my strike at her knees. ‘Mama—’

‘Must she fight your battles for you?’ I laugh. ‘Come on, Yem. If you’re going to lose, do it with pride!’

Rage flashes in Yemi’s eyes like a bull-horned lionaire ready to pounce. She clenches her staff with a vengeance.