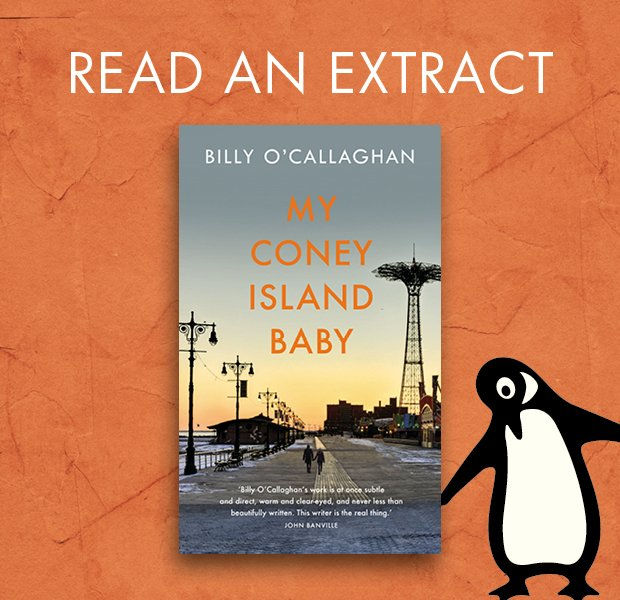 Penguin Random House has shared an excerpt from My Coney Island Baby by Billy O’Callaghan.

On a bitterly cold winter’s afternoon, Michael and Caitlin escape their unhappy marriages to keep an illicit rendezvous. Once a month, for the past quarter of a century, Coney Island has been their haven.

These precious, hidden hours are their only nourishment. But now, amid the howling of an angry snowstorm, the shut-down, out-of-season resort feels like the edge of the world. And their lives, suddenly, are on the brink – with news of serious illness on one side, and a move to the Midwest on the other. And so, after half a lifetime spent in secret, certain long-avoided facts need to be faced, consequences examined, decisions made, and – perhaps – chances finally taken.

A quiet, intense drama of late-flowering intimacy, My Coney Island Baby condenses, within the course of a single day, the histories, landscapes, tragedies and moments of wonder that constitute the lives of two people who, although born worlds apart, have been drawn together.

O’Callaghan, a masterful prose stylist, has created a devastatingly powerful novel about two unforgettable characters and the choices they have made. This is a book full of sorrow, but also radiant with beauty, longing and breathless desire.

‘It’s that rare thing, a tender straight-ahead love story which convinces thoroughly while steering clear of the fashionably dysfunctional and transgressive relationships that dominate so much contemporary fiction.’
– Sunday Times

The air out here is mean with cold. It was bitter on the journey out from Manhattan too, but nothing like this. This is bleakness without respite. An hour in the subway was an hour shielded from the wind, and now it is almost noon and already threatening snow.

Michael and Caitlin walk quickly, side by side, heads lowered, shoulders hunched. Apart from a couple of drunks in a doorway arguing mutedly over a bottle, and further out past Nathan’s along Surf Avenue an elderly black man leashed by a length of orange clothes line twine to a ridiculously small dog, the streets feel deserted, locked down. Most of the stores along here are shuttered too, some closed for the season, others having already written off the day as a bad debt. Passing trade is below freezing. The few places that insist on remaining open – a liquor store, a 7-Eleven, some sort of a goodwill shop with stacks of used, spine-cracked paperbacks in wicker baskets still out on the window ledges and green plastic sacks of clothes lining the pavement – do so more out of stubbornness than duty. Apart from the 7-Eleven, which probably feels contractually obliged, these stores don’t bother to burn much light. This afternoon, Coney Island feels like the end of the world, the last bastion just short of some great abyss, a place for the damned to drift, waiting their turn at nothingness.

They keep, as much as possible, to the shelter of the buildings. Words come in clenches, whistling and operatic, but it hurts just to breathe, and talking feels even worse. Caitlin holds her coat bunched closed across her throat in one fist. The wind is strong enough to pull tears from her eyes. It gusts and swirls around them, tugging at the hem of her overcoat, and she is glad that she thought to wear a scarf today, though she could have done with gloves, too. Her pockets are deep but provide barely the suggestion of heat.

Snow is forecast, torrents of the stuff, blizzards, but for now it is holding back, except for the occasional spatters that hit like thrown stones and leave imagined bruises in the air and on the skin. The sky above is mud, a bullying slob of grey running into grey, slaughtering detail and definition. Caitlin leans into Michael and they press on at a staggering half-run. Because there is nothing else to do, now that they have started in this direction.

This is the worst stretch of road, just here, where they hurry out across the empty street, because it takes them headlong into the mouth of the gale. They are forced to walk almost in one another’s arms and the noise of the wind howling in their ears drowns out even the shambles of their own laboured breathing. And when, finally, they leave the promenade and turn out onto the pier the wind lifts to new intent and tears at them, at their faces and their clothes, turning them dishevelled in a hurry. All they can do is make for the line of shacks, the boardwalk stalls locked down and abandoned for the season. Shelter to press against, and a hiding place.

‘Christ,’ Caitlin gasps, then laughs with a kind of terror. ‘It’s like something out of Revelation.’

Startled by how close she has come to the run of his own mind, Michael takes hold of her, with one arm drawing her to his body. Needing her that close. She looks up at him. Her face has turned the colour of flour. A new depth of pale. She is wearing a subtle daub of lip gloss, a sanguine red already hours worn, but her mouth is small, pinched tight against the cold, and the definition counts for very little, even when she smiles. He thinks of geisha women; sweet, delicate dolls in sky-blue kimonos, with their faces blanched by powder and a tiny rosebud pout painted into place. Made to look girlish and demure but in possession of a secret fire somewhere underneath or deep inside, the kind of raging, ravishing inferno that in a single blast can smelt bone down to dribbling soup. Caught in Caitlin’s wide, frightened animal eyes, trans- fixed by her drained expression, he glimpses, briefly and for the first time today, the merest hint as to who she truly is, or might be, or who she could be. She is a woman born to deceive, he suddenly realises. An angelic outer skin belying fiery lies within. And this is one of the details he loves most about her.

‘The end won’t be like this,’ he says, his mouth close enough to taste her breath, and for her to taste his. ‘When that comes we won’t even know it. We’ll be here, and

then a millionth of a second later, we won’t be. Not even the dust of us.’

He shakes his head, and smiles. ‘I’m too happy to be drunk.’

‘Of course. Hard to believe, I know, but that’s how I feel. Because look where we are. Look who I’m with.’