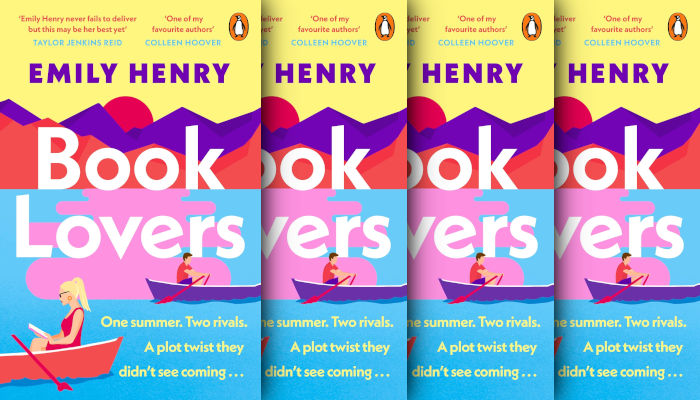 Nora is a cut-throat literary agent at the top of her game. Her whole life is books. Charlie is an editor with a gift for creating bestsellers. And he’s Nora’s work nemesis.

A hilarious enemies-to-lovers rom-com from the author of Beach Read and You and Me on Vacation.

WHEN BOOKS ARE your life – or in my case, your job – you get pretty good at guessing where a story is going. The tropes, the archetypes, the common plot twists all start to organize themselves into a catalogue inside your brain, divided by category and genre.

The husband is the killer.

The nerd gets a makeover, and without her glasses, she’s smoking hot.

The guy gets the girl – or the other girl does.

Someone explains a complicated scientific concept, and someone else says, “Um, in English, please?”

The details may change from book to book, but there’s nothing truly new under the sun.

The kind where a cynical hotshot from New York or Los Angeles gets shipped off to Smalltown, USA – to, like, run a family-owned Christmas tree farm out of business to make room for a soulless corporation.

But while said City Person is in town, things don’t go to plan. Because, of course, the Christmas tree farm – or bakery, or whatever the hero’s been sent to destroy – is owned and operated by someone ridiculously attractive and suitably available for wooing.

Back in the city, the lead has a romantic partner. Someone ruthless who encourages him to do what he’s set out to do and ruin some lives in exchange for that big promotion. He fields calls from her, during which she interrupts him, barking heartless advice from the seat of her Peloton bike.

You can tell she’s evil because her hair is an unnatural blond, slicked back à la Sharon Stone in Basic Instinct, and also, she hates Christmas decorations.

As the hero spends more time with the charming baker/seamstress/tree farm … person, things change for him. He learns the true meaning of life!

He returns home, transformed by the love of a good woman. There he asks his ice-queen girlfriend to take a walk with him. She gapes, says something like, In these Manolos?

It will be fun, he tells her. On the walk, he might ask her to look up at the stars.

She snaps, You know I can’t look up right now! I just got Botox!

And then he realizes: he can’t go back to his old life. He doesn’t want to! He ends his cold, unsatisfying relationship and proposes to his new sweetheart. (Who needs dating?)

At this point, you find yourself screaming at the book, You don’t even know her! What’s her middle name, bitch? From across the room, your sister, Libby, hushes you, throws popcorn at your head without lifting her gaze from her own crinkly-covered library book.

And that’s why I’m running late to this lunch meeting.

Because that’s my life. The trope that governs my days. The archetype over which my details are superimposed.

I’m the city person. Not the one who meets the hot farmer. The other one.

The uptight, manicured literary agent, reading manuscripts from atop her Peloton while a serene beach scene screen saver drifts, unnoticed, across her computer screen.

I’m the one who gets dumped.

I’ve read this story, and lived it, enough to know it’s happening again right now, as I’m weaving through late-afternoon foot traffic in Midtown, my phone clutched to my ear.

He hasn’t said it yet, but the hairs on the back of my neck are rising, the pit opening in my stomach as he maneuvers the conversation toward a cartoon-style drop off a cliff.

Grant was only supposed to be in Texas for two weeks, just long enough to help close a deal between his company and the boutique hotel they were trying to acquire outside San Antonio. Having already experienced two post-work trip breakups, I reacted to the news of his trip as if he’d announced he’d joined the navy and was shipping out in the morning.

Libby tried to convince me I was overreacting, but I wasn’t surprised when Grant missed our nightly phone call three times in a row, or when he cut two others short. I knew how this ended.

And then, three days ago, hours before his return flight, it happened. A force majeure intervened to keep him in San Antonio longer than planned. His appendix burst.

Theoretically, I could’ve booked a flight right then, met him at the hospital. But I was in the middle of a huge sale and needed to be glued to my phone with stable Wi-Fi access. My client was counting on me. This was a life-changing chance for her. And besides, Grant pointed out that an appendectomy was a routine procedure. His exact words were “no big deal.”

So I stayed, and deep down, I knew I was releasing Grant to the small-town-romance-novel gods to do with what they do best.

Now, three days later, as I’m practically sprinting to lunch in my Good Luck heels, my knuckles white against my phone, the reverberation of the nail in my relationship’s coffin rattles through me in the form of Grant’s voice.

“Say that again.” I mean to say it as a question. It comes out as an order.

Grant sighs. “I’m not coming back, Nora. Things have changed for me this past week.” He chuckles. “I’ve changed.”

A thud goes through my cold, city-person heart. “Is she a baker?” I ask.

“Is she a baker?” I say, like that’s a perfectly reasonable first question to ask when your boyfriend dumps you over the phone. “The woman you’re leaving me for.”

After a brief silence, he gives in: “She’s the daughter of the couple who own the hotel. They’ve decided not to sell. I’m going to stay on, help them run it.”

I can’t help it: I laugh. That’s always been my reaction to bad news. It’s probably how I won the role of Evil Villainess in my own life, but what else am I supposed to do? Melt into a crying puddle on this packed sidewalk? What good would that do?

I stop outside the restaurant and gently knead at my eyes. “So, to be clear,” I say, “you’re giving up your amazing job, your amazing apartment, and me, and you’re moving to Texas. To be with someone whose career can best be described as the daughter of the couple who own the hotel?”

“There’s more important things in life than money and a fancy career, Nora,” he spits.

I laugh again. “I can’t tell if you think you’re being serious.”

Grant is the son of a billionaire hotel mogul. “Raised with a silver spoon” doesn’t even begin to cover it. He probably had gold-leaf toilet paper.

Which is precisely what makes his last comment so rich, both figuratively and literally.

I must say this last part aloud, because he demands, “What’s that supposed to mean?”

I peer through the window of the restaurant, then check the time on my phone. I’m late – I’m never late. Not the first impression I was aiming for.

“Grant, you’re a thirty-four-year-old heir. For most of us, our jobs are tied directly to our ability to eat.”

“See?” he says. “This is the kind of worldview I’m done with. You can be so cold sometimes, Nora. Chastity and I want to—”

It’s not intentional – I’m not trying to be cutting – when I cackle out her name. It’s just that, when hilariously bad things happen, I leave my body. I watch them happen from outside myself and think, Really? This is what the universe has chosen to do? A bit on the nose, isn’t it?

In this case, it’s chosen to guide my boyfriend into the arms of a woman named after the ability to keep a hymen intact. I mean, it is funny.

He huffs on the other end of the line. “These people are good people, Nora. They’re salt of the earth. That’s the kind of person I want to be. Look, Nora, don’t act upset—”

“Of course I don’t!” I’ve worked hard to build a life that’s my own, that no one else could pull a plug on to send me swirling down a cosmic drain.

“You’ve never even stayed over at my place—” he says.

“My mattress is objectively better!” I researched it for nine and a half months before buying it. Of course, that’s also pretty much how I date, and still, I end up here.

“—so don’t pretend you’re heartbroken,” Grant says. “I’m not sure you’re even capable of being heartbroken.”

Again, I have to laugh.

Because on this, he’s wrong. It’s just that once you’ve had your heart truly shattered, a phone call like this is nothing. A heart-twinge, maybe a murmur. Certainly not a break.

Grant’s on a roll now: “I’ve never even seen you cry.”

You’re welcome, I consider saying. How many times had Mom told us, laughing through her tears, that her latest beau had told her she was too emotional?

That’s the thing about women. There’s no good way to be one. Wear your emotions on your sleeve and you’re hysterical. Keep them tucked away where your boyfriend doesn’t have to tend to them and you’re a heartless bitch.

“Of course you do,” he replies.

Apparently my following through with prior commitments is just more proof that I am a frigid, evil robot who sleeps in a bed of hundred-dollar bills and raw diamonds. (If only.)

I hang up without a goodbye and tuck myself beneath the restaurant’s awning. As I take a steadying breath, I wait to see if the tears will come. They don’t. They never do. I’m okay with that.

I have a job to do, and unlike Grant, I’m going to do it, for myself and everyone else at Nguyen Literary Agency.

I smooth my hair, square my shoulders, and head inside, the blast of air-conditioning scrubbing goose bumps over my arms.

It’s late in the day for lunch, so the crowd is thin, and I spot Charlie Lastra near the back, dressed in all black like publishing’s own metropolitan vampire.

We’ve never met in person, but I double-checked the Publishers Weekly announcement about his promotion to executive editor at Wharton House Books and committed his photograph to memory: the stern, dark brows; the light brown eyes; the slight crease in his chin beneath his full lips. He has the kind of dark mole on one cheek that, if he were a woman, would definitely be considered a beauty mark.

He can’t be much past his mid-thirties, with the kind of face you might describe as boyish, if not for how tired he looks and the gray that thoroughly peppers his black hair.

He glances at his watch.

Not a good sign. Right before I left the office, my boss, Amy, warned me Charlie is famously testy, but I wasn’t worried. I’m always punctual.

Except when I’m getting dumped over the phone. Then I’m six and a half minutes late, apparently.