Read an excerpt from David Barclay Moore’s magnificent debut novel The Stars Beneath Our Feet
More about the book! 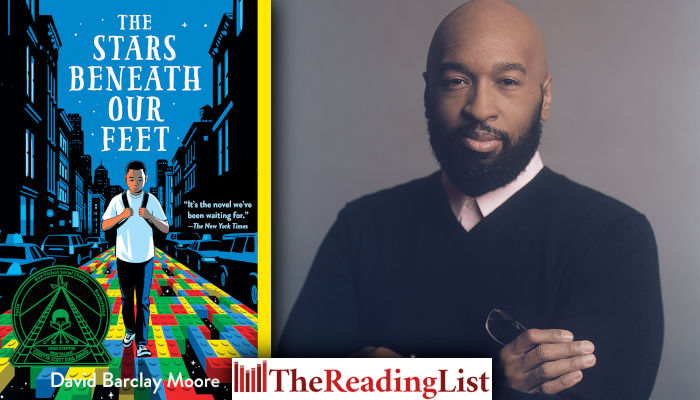 Penguin Random House has shared an excerpt from The Stars Beneath Our Feet by David Barclay Moore.

‘The right story at the right time … It’s not just a narrative; it’s an experience. It’s the novel we’ve been waiting for.’ – The New York Times

A boy tries to steer a safe path through the projects in Harlem in the wake of his brother’s death in this outstanding debut novel that celebrates community and creativity.

The Stars Beneath Our Feet is the winner of the Coretta Scott King–John Steptoe Award for new talent. Black Panther star Michael B Jordan will make his directorial debut in the movie adaptation of the book.

It’s Christmas Eve in Harlem, but 12-year-old Lolly Rachpaul and his mom aren’t celebrating. They’re still reeling from his older brother’s death in a gang-related shooting just a few months earlier. Then Lolly’s mother’s girlfriend brings him a gift that will change everything: two enormous bags filled with Legos. Lolly’s always loved Legos, and he prides himself on following the kit instructions exactly. Now, faced with a pile of building blocks and no instructions, Lolly must find his own way forward.

His path isn’t clear — and the pressure to join a ‘crew’, as his brother did, is always there. When Lolly and his friend are beaten up and robbed, joining a crew almost seems like the safe choice. But building a fantastical Lego city at the community center provides Lolly with an escape — and an unexpected bridge back to the world.

David Barclay Moore paints a powerful portrait of a boy teetering on the edge — of adolescence, of grief, of violence and shows how Lolly’s inventive spirit helps him build a life with firm foundations and open doors.

David Barclay Moore was born and raised in Missouri in the United States. After studying creative writing at Iowa State University, film at Howard University in Washington, DC, and language studies at l’Université de Montpellier in France, David moved to New York City, where he has served as communications coordinator for Geoffrey Canada’s Harlem Children’s Zone and communications manager for Quality Services for the Autism Community. He has received grants from the Ford Foundation, the Jerome Foundation, Yaddo, and the Wellspring Foundation. He was also a semi-finalist for the Sundance Screenwriters Lab. David now lives, works, and explores in Brooklyn, NY.

He would never, ever be coming home.

My daddy, Benny Rachpaul, had bought me these sneakers when I turned twelve over the summer. I wasn’t about to let two older boys strolling down 125th Street snatch them off me.

Besides me being humiliated by it, my mother would whup my butt if she knew I had let some dudes swipe my shoes. And then, when he found out, Daddy Rachpaul would drive over and whup me again.

I flipped up the collar of my blue parka and continued down 125th Street, but rushed my step a little bit more. I heard the two boys following me quicken their pace. Their footsteps behind me crunched on the ice that much faster. My heart was beating faster too.

The streets around me were cheery, though. Harlem’s main street was laid out tonight with bright lights, and Christmas tunes played constant on loudspeakers. I guess to put you more in the Christmas spirit.

But for me, there was nothing, and I mean nothing, that would ever make me feel Christmassy again. I was through with it.

Done with all of the Christmas music, wreaths, ornaments and happy holiday shoppers. I had decided weeks ago that I would never be happy again.

Because it wasn’t fair.

Wasn’t fair to get robbed of somebody I thought would be there for the rest of my life. Someone who was supposed to spend this Christmas with me, plus lots more Christmases!

It also wasn’t fair that I couldn’t even walk down 125th Street without being harassed. Rushing along down the sidewalk, I glanced up at all the men who were passing. All of them older and most of them Black like me. I was the youngest one out here and one of the few who felt scared to walk down this street.

For us young brothers, taking a stroll down here, even on Christmas Eve, was not relaxing at all. I felt like I had put my life on the line, straight up.

All of these old dudes lived in a different world from me.

I crossed the street and dipped into a gift shop on the corner. Grinning wide smiles, my two ‘buddies’ waited for me outside, one of them sitting down on a fire hydrant and wiggling his fingers at me like I was a little infant in a stroller.

I sucked my teeth and turned toward the salesclerk.

‘Happy holidays, my young man,’ the clerk said. ‘Help you find something?’ For a minute, his eyes peeped outside at the two boys waiting. He frowned at them.

I watched them leave and sighed with relief. The clerk cocked his bald head to one side.

‘I need a excellent Christmas gift,’ I said. ‘One for my mother, and another one for her, um, friend. And for my father. But I don’t have much money.’

‘Last-minute shoppers,’ he said, smiling at me. ‘Come on. We’ll get you straightened up. You’re lucky we’re open this late on Christmas Eve–125th Street is shutting down.’