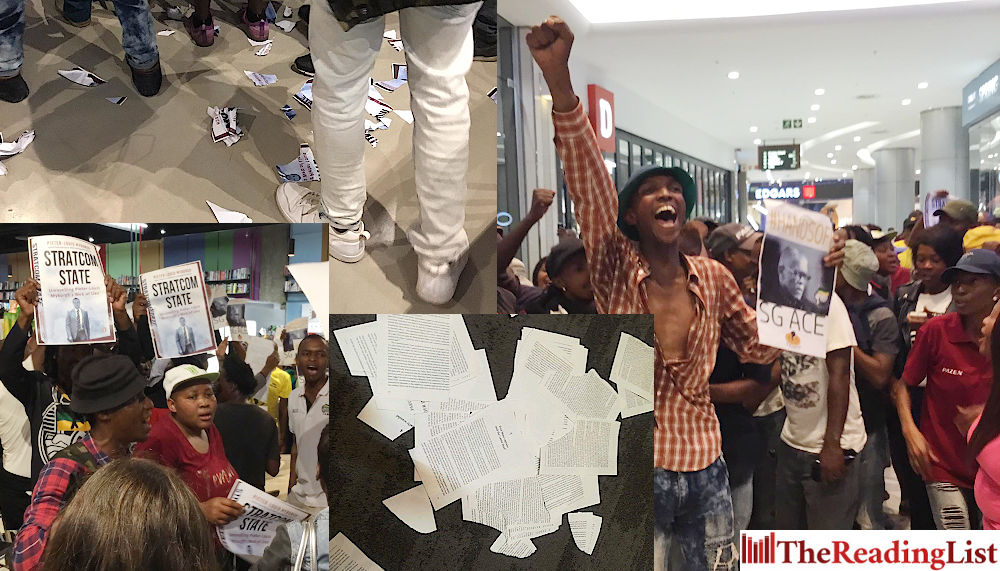 The protesters ripped up copies of the book and chanted ‘Ace, Ace, Ace’, referring to ANC Secretary-General Ace Magashule, who the book implicates in state capture and looting in the Free State government.

It is not known which group the protesters represented, although some were wearing ANC T-shirts.

The book launch was ultimately cancelled and the store closed.

In a statement, the ANC distanced itself from the protest:

The African National Congress (ANC) distances itself from the disruption of the launch of the book, Gangster State, on Tuesday evening in Sandton.

The ANC condemns the disruption and the call to burn books in the strongest possible terms. We wish to emphasise that those who disrupted the launch did not do so in the name of the ANC nor on behalf of the ANC Secretary General.

We view the actions of these individuals in a very serious light as it undermines freedom of speech.

Our constitutional democracy enjoins us to defend every citizen’s right to freedom of speech irrespective of whether we agree with the contents or not.

The ANC appeals to all its structures to observe and adhere to the letter and spirit of our Constitution.

After Gangster State was released on Sunday 31 March, the ANC released a strongly worded statement slamming media coverage of the publication, and calling the book ‘fake news’ and a ‘highly personalised and vicious attack’ on Magashule.

In response, the book’s publisher Penguin Random House released a statement saying they stood by Myburgh and would not withdraw Gangster State despite criticism from the ANC.

On 5 April, Penguin Random House has released another statement in response to an interview Magashule gave eNCA, in which he called Myburgh a ‘blatant liar’, saying: ‘We are not afraid of Mr Magashule’s threats. We will continue to stand by the author of Gangster State, and we will continue to stand up for the freedom to publish without political pressure.’

Penguin Random House posted videos of the protest to its Facebook page:

‘Singing and chanting continues. #AceMagashule #GangsterState @PLMyburgh. Copies of the book being rippied and pages thrown around. Security escorts protestors out of @ExclusiveBooks Sandton City.’

Singing and chanting continues. #AceMagashule #GangsterState @PLMyburgh. Copies of the book being rippied and pages thrown around. Security escorts protestors out of @ExclusiveBooks Sandton City.