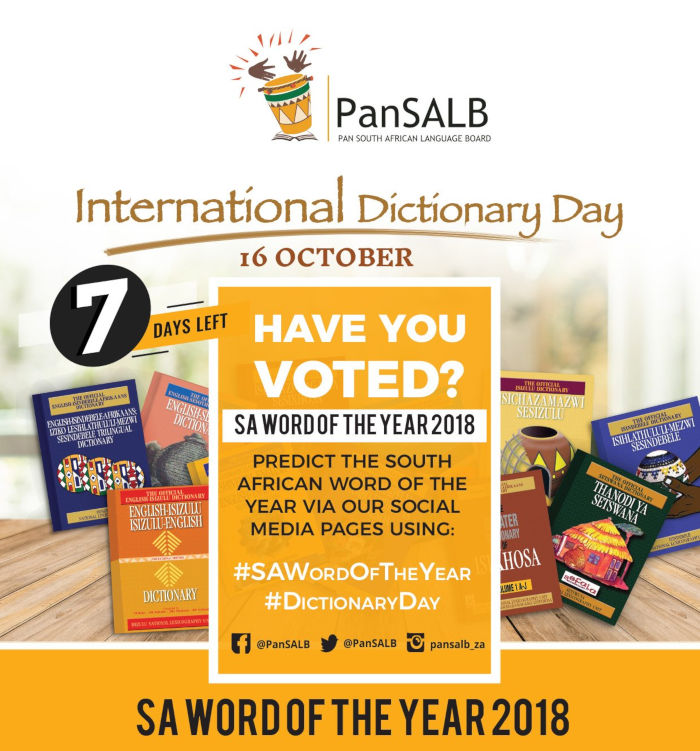 The Pan South African Language Board will announce the 2018 South African Word of the Year on International Dictionary Day, 16 October 2018.

In 2017, ‘state capture’ was crowned as the SA Word of the Year, defeating contenders such as ‘white monopoly capital’ and ‘blesser’.

According to PanSALB the South African Word of the Year must capture the ethos, mood or preoccupations of 2018.

Participate by predicting the Word of the Year on PanSALB’s social media pages. Use the hashtags #DictionaryDay and #SAWordoftheYear to post on social media:

16 October 2018 is International Dictionary Day. This day is observed annually the world over.

In celebrating this day, the Pan South African Language Board (PanSALB) will announce its 2018 South African Word of the Year. We are looking for a word or expression chosen to reflect the passing year in language. In so doing we create awareness that the business of our Lexicography Units develop dictionaries in all South African official languages is mindful of the universal natural fact that language is a social phenomenon that is forever influx. New concepts and associative terms and meaning would forever emerge.

‘The SA Word of the Year need not have been coined within the past twelve months,’ PanSALB acting CEO Angelina Netshiheni says.

‘To qualify for consideration we look for evidence that its usage has increased significantly across a broad range of media.’

In 2017, ‘state capture’ was crowned as the SA Word of the Year, defeating words like ‘white monopoly capital’ and ‘blesser’. According to PanSALB the above words captured the ethos, mood, or preoccupations of 2017.

We will review candidates for word of the year, debate their merits, choose the one that captures the ethos, mood, or preoccupations of 2018. The winner will be announced on Monday, 16 October 2017, to coincide with International Dictionary Day, at ceremony to be held at the University of Fort Hare in Alice, Eastern Cape.

During that day the IsiXhosa National Lexicography Unit which was started in 1968 as Dictionary Unit will be celebrating 50 years of existence.

Celebrate by predicting the SA Word of the Year via our social media pages. Use #DictionaryDay #SAWordoftheYear to post on social media:

National Dictionary Day was created in honour of Noah Webster’s birthday (October 16, 1758) and was set aside as a day to emphasise the importance of learning and using dictionary skills and increasing one’s vocabulary. Webster is considered the Father of the American Dictionary.