Pigs, Love and a Bride Bereft – read an excerpt from Loves and Miracles of Pistola, the debut novel from Hilary Prendini Toffoli
More about the book! 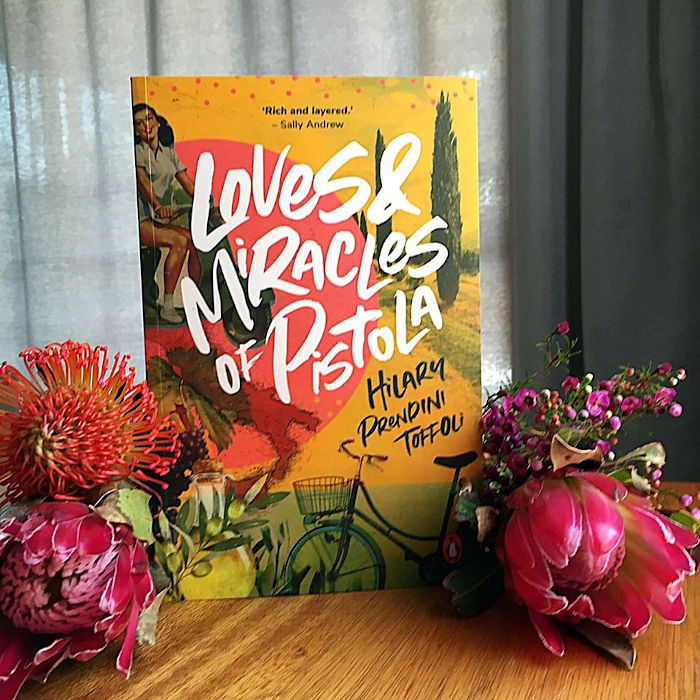 Witty, affectionate and vivid, this coming-of-age novel pays homage to the 110 young Italian men who were recruited to work on the South African Railways and introduced Italian cuisine to the nation.

In a tiny Italian village, life in the 1950s is a daily pageant of small human dramas. There are lippy signoras and earthy farmworkers. There is a coffin-maker, a silkworm farmer and those who catch frogs for the town’s local delicacy: frog risotto. And then there’s Pistola, a teenage boy in love with his second cousin Teresa, a girl who is sadly destined to marry the village thug.

To escape his heartache, young Pistola accepts the offer of a lifetime: to travel to South Africa to work on the trains. In lively Johannesburg, he and a group of compatriots are trained as stewards and taught to speak English – and Afrikaans. It’s not all work, mind you. The Italians set up home in Hillbrow and go partying in Sophiatown with the likes of Miriam Makeba. When Pistola falls for the spunky Malikah, a political activist, the apartheid police watch every breath of their passionate, illicit relationship.

Flash forward a few years, when Pistola, no longer the gauche village boy, must return home to make a decision that will define his future. Witty, affectionate and vivid, this coming-of-age novel pays homage to the 110 young Italian men who were recruited to work on the South African Railways and introduced Italian cuisine to the nation.

Pigs, Love and a Bride Bereft

Two basic life principles become as clear as consommé to Pistola one steamy afternoon during the long summer holidays of his last high school year. He’s watching his grandfather slaughter two geese for Teresa Faccincani’s wedding when the first principle strikes him. It’s the notion that happiness is really all about food.

The second comes a little later when he discovers that the bridegroom of the girl he has loved for as long as he can remember has run off 48 hours before the wedding.

Nothing, he then gratefully realises, is forever.

As it happens All Is Flux is an idea he became acquainted with in his Greek philosophy class at the Liceo Classico. Heraclitus is Professor Orvieto’s favourite thinker, and Pistola’s fertile mind has no difficulty relating to the concept that you cannot put your foot into the same river twice. It’s never the same water.

What he cannot know at this point of his still budding existence is that the waters of his life will take him faraway from this village to a country foreign to everything he has grown up with, a country that will intrigue and stretch him and ultimately chastise him. Right now though, all that matters is that Teresa is no longer about to become the wife of the despicable Aguinaldo Bersella.

Water is forever moving on in the village of Campino where he was born shortly before the conflict into which Mussolini dragged his reluctant countrymen. This land flat as a pizza is all canals, rivers and rice-paddies. Narrow streams run beside fields of fruit and vegetables. Small fish play in the dark green streaming weeds that once nearly dragged Pistola to a dark green sodden death.

This September is hotter and more humid than usual. Nonno Mario has been fattening the geese in the pen under the cherry tree in his back yard. He slaughters them neatly and quickly with the help of his brother-in-law, Zio Umberto the butcher. Zio Umberto has arms like Parma hams and does a lot of shouting.

‘Hey Mario! What you feed these beasts? Porca Madonna! They’re as big as whales!’

Though Pistola feels a certain sadness for the geese, he’s mainly aware of anticipated euphoria in the tastebuds. He has eaten Nonno Mario’s roast goose only once. Those few titillating mouthfuls snatched at the stove were a revelation. Nonno Mario is short-fused and sharp-tongued but the dishes produced in his stifling kitchen are worth a crack over the head. Soon the birds are being tied up with rosemary and strips of pancetta, and taken down to the bakery of his aunt Zia Andromaca to be cooked in the wood oven where she bakes bread for the village every morning.

Preparations for the wedding are prodigious. Teresa Faccincani’s father is a pig farmer which means copious antipasti. Everyone has a healthy respect for the valley’s sows. Not only because they taste so good in their various culinary incarnations but, as Pistola has unhappily found out, when they come at you full tilt it’s like being run down by a small Fiat.

There have always been twice as many pigs as people in the valley. Male pigs are smaller than females and have to perform miracles.

‘If God in a moment of genius hadn’t given them sexual equipment shaped like corkscrews, things would have gone badly for the entire species,’ is Nonno Mario’s opinion. Worse, the valley would never have known the record-breaking piglet litters that provide some of the world’s great taste sensations. Salami, coppa, pancetta, cotechino and the sublime prosciutto. Except during the war there has always been enough to eat in Campino even though it’s a poor village. ‘This land is like the mother pig,’ Nonno Mario is always telling Pistola. The Po Valley is unstinting in its nourishment, the ground so fertile if you throw a seed on it, it sprouts in a few days. Pistola has his own small vegetable patch in the back yard of the tiny house where he lives with his grandfather on Via Luigi Caprini.

For the seven-course wedding feast no effort will be spared. It’s an opportunity to show off your talents in a part of the world where each day is devoted to the pleasures of eating. Life is all pasta, glorious pasta. Here the normal midday village greeting is not the cheery ‘How you doing?’ you might hear in any other part of the world. Instead Campino villagers greet one another with the words ‘So, had a good meal?’ Even at funerals you can be sure to hear some gnarled fellow muttering as the coffin disappears ‘Ah well, no more tagliatelle for that poor sod.’

Half the village has been invited to Teresa’s wedding. She is Bepi Faccincani’s only child, and Bepi has asked Nonno Mario to take charge of the food, not only because Nonno Mario worked in a trattoria in Milan when he left the army, but because getting him to cook the wedding feast is one way of making sure he’ll sing at the party afterwards.

Nonno Mario and Bepi Faccincani are second cousins, famous for the spontaneous duets they perform when fueled by enough carafes of good vino rosso. Bepi does the tenor role and Nonno Mario the soprano in a contralto voice. Nonno Mario is so good at the woman’s role he can even do Violetta succumbing to TB. His rendition of ‘Addio del passato bei sogni riddenti …’ is like a sigh from a frail soul, and he accompanies his performance with a wide range of what he believes to be classic female facial and body language, much to the delight of the entire village.

In looks Pistola is like his grandfather, but not in personality. Sensitivity and introspection are Pistola’s major traits, coupled with a certain charming reticence, unlike Nonno Mario who in his youth was an irrepressible extrovert and hasn’t changed much. Tall and lean with a tanned muscular jaw, a million flashing white teeth and loads of tumbling thick black hair that he combed back over his head like Rodolfo Valentino, he was the cliché Casanova. Now his hair is grey but still thick. His teeth are still strong and white. The light in his blue eyes is undimmed, even though he has buried both his wife Isabella and his daughter Peppina – Pistola’s mother – in wartime circumstances so sorrowful they would have killed a lesser man.

A complicated man who’s a force of nature, once a soldier in Italy’s elite high-mobility Bersaglieri, he indulges all his passions with gusto. They’ve kept him buoyant through a variety of relationships with women he hoped might take the place of the sadly irreplaceable Isabella. By now he and Pistola have learned to fend for themselves. As Nonno Mario puts it: ‘Chi dice donna dice danno.’ Say woman, say trouble.