Out now! Friends, Lovers and the Big Terrible Thing by Matthew Perry
More about the book! 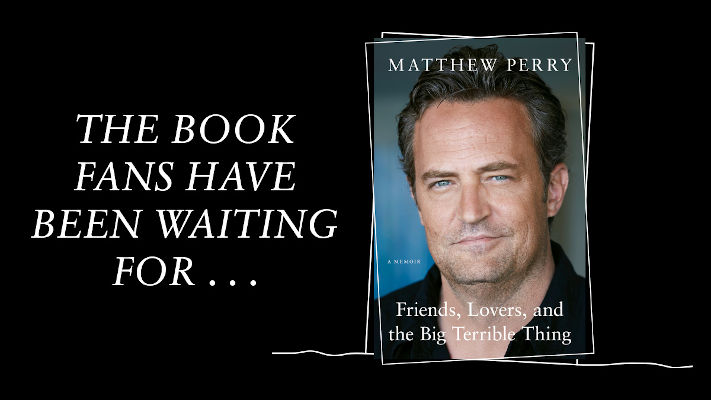 Friends, Lovers and the Big Terrible Thing – the extraordinarily open and honest autobiography of acclaimed Friends star Matthew Perry – is out now from Jonathan Ball Publishers.

‘Hi, my name is Matthew, although you may know me by another name. My friends call me Matty. And I should be dead.’

The book has a Foreword by Lisa Kudrow.

Perry takes us behind the scenes of the hit sitcom and his struggles with addiction in this candid, funny, and revelatory memoir that delivers a powerful message of hope and persistence.

Candid, self-aware and told with his trademark humour, Perry vividly details his lifelong battle with the disease and what fueled it, despite seemingly having it all. Perry’s memoir, the first from a cast member of Friends, is unflinchingly honest, delightfully gossipy, and absolutely hilarious. This is the book that Friends fans have been waiting for but also one that shines a powerful light into the dark for anyone who is in their own battle with addiction, either for themselves or a loved one.

Matthew Perry said: ‘There has been so much written about me by others in the past. I thought it was time people heard it directly from the horse’s mouth. In this case, the horse’s mouth being me.’

Last year, Matthew Perry was seen reuniting with Jennifer Aniston, David Schwimmer, Matt LeBlanc, Lisa Kudrow and Courtney Cox in HBO Max’s highly anticipated Friends: The Reunion. Perry shot to fame as Chandler Bing on the hit show during its critically acclaimed, record breaking ratings run from 1994-2004, and has continued in film, TV, and stage since with acting, directing, and playwriting credits to his name.