New from Ben Trovato – Durban Poison: A Collection of Vitriol and Wit
More about the book! 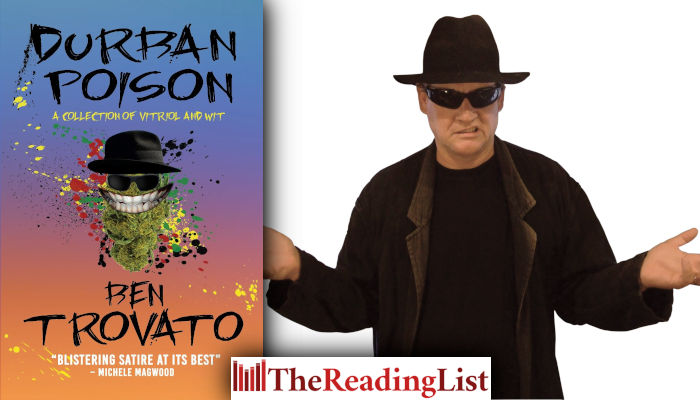 Durban Poison: A Collection of Vitriol and Wit – the new book by Ben Trovato – out now!

‘Throws our sacred cows at an electric fence while turning the voltage to maximum.’

Ben Trovato’s writing has been described as ‘the literary equivalent of sex with a clown’. In his latest book, Durban Poison, he derives an almost unseemly amount of pleasure from satirising the foibles and fantasies of our political fabulists.

In this collection of wit and venom, he goes further than poking the bears of bureaucracy or lampooning the low-hanging fruitcakes of our world. Frequently turning the gaze on himself, Trovato doesn’t always like what he finds.

From marital failures to travel disasters, from medical emergencies to breaking the law, Trovato bravely and often stupidly goes where many fear to tread.

With an itchy trigger-finger and sights set permanently on roam, Trovato guns for the power-crazed despots, the bankers and the wankers and all who try to run and ruin our lives. Sometimes he misses and kicks the underdog by mistake, but that’s life for you.

He also writes about gardening and cooking, but not in a good way.

When the Sunday Tribune released Trovato back into the wild ‘for budgetary reasons’ in 2018, the newspaper was flooded with letters from devastated fans.

‘I would like to express my extreme disappointment upon reading Ben Trovato’s last column where he informed his readers his column will no longer be appearing. It would be a sad day for media freedom if this column were axed simply because it had offended someone who wielded power over others.’ – Robert Littlefield

‘What you should do is give Ben Trovato more space, not fire him. He will go down as one of South Africa’s cultural treasures and you’ll be remembered as the platform that propped up one of our best satirists.’ – Nic Lobo

‘I never know how to quite understand Ben’s writing. As a very old adult (79), I can’t make out if he is joking or not. If Ben disappears, it will be another sad blow to our fast-disappearing cheerful South African humour.’ – Trevor Butler

‘Please! You cannot let Ben Trovato stop writing. This is a huge mistake. He might just be the only genius you know.’ – Malinda Nel

‘I am sad to hear Ben Trovato has been given the bullet and won’t be writing your most interesting and hilarious court jester column. So after 50 or so years of reading the Sunday Tribune, I have decided to join you on your ride into the sunset. As I am 82 years old, I hope you won’t mind if I rather walk next to your horse. I’ll bring my own beer.’ – Chris Christensen

Ben Trovato has been keeping the nation amused and outraged since 2001 when he published his first book, The Ben Trovato Files, which was long-listed for the Sunday Times Alan Paton Award for non-fiction. He was also nominated for a Safta award for writing on the satirical television show ZA News: Puppet Nation. Trovato, who divides his time between Durban and Cape Town depending on the weather, has been a regular columnist for a number of magazines and newspapers. He lives alone with two regrets and a hangover.