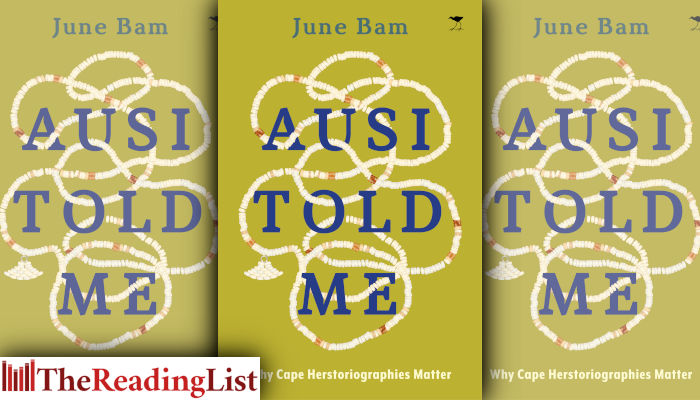 Ausi Told Me: Why Cape Herstoriographies Matter by June Bam.

This is a trouble-making book.

In a bold and fascinating narrative, June Bam presents a history of the imposition of history and the suppression of knowledge. She considers the voices that have been left out of the official history of our deep pasts and how this omission has impacted on our knowledge of South Africa’s pasts. What can the interpretations of the plants, rituals and knowledge of the cosmologies tell us about the ongoing link between a pre-colonial past (often assumed to be of an extinct people) and indigenous identities in an integrated South African present?

Ausis (first-born women knowledge keepers in the Cape) were and continue to be profound intergenerational knowledge holders of these pasts and this book challenges absences and assumptions about the Cape Flats and surrounds.

‘Our history did not start in 1488. People moved past this point long before Diaz. Look at the evidence in pathways, mountains, the landscape, of travels and migrations before 1488. They are in our languages. How our cattle came about. Huge horned cattle. […] The Chinese marked in places even here in South Africa of where they were. We want to see that.’ – Jaypee Phillips, Mossel Bay Khoi activist

June Bam heads the San and Khoi Unit at the Centre for African Studies, University of Cape Town. She leads on !Gâ re – Rangatiratanga – Dadirri, with fellow indigenous scholars of the Worldwide University Network and has been visiting professor with Stanford University’s overseas programme (2014–2020). She has co-edited Whose History Counts (2018) and Indigenous Women Re-interpret Southern Africa’s Pasts (2021). Her previous collaborative work, Turning Points in History, won the Unesco Peace Education Prize for South Africa (2008).