New book alert! Tomorrow I Become a Woman – a powerful debut by Aiwanose Odafen
More about the book! 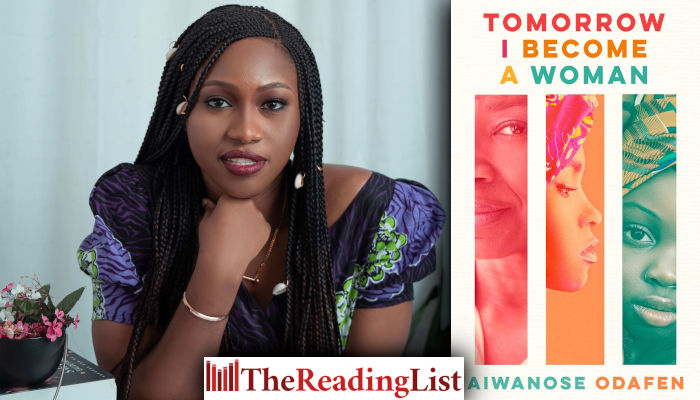 What can I do?’ she asked. You can fight, I thought, you can fight for your daughters. But then again, who was I to speak of such things

Tomorrow I Become a Woman by Aiwanose Odafen is out now from Jonathan Ball Publishers.

Loosely based on the real stories of real women known to the author, Tomorrow I Become a Woman follows a complex relationship between mother and daughter as they grapple to come to terms with tremendous loss.

This powerful debut by Aiwanose Odafen is a sensitive exploration of a woman’s struggle to meet societal and cultural expectations within the confines of a difficult marriage, a tribute to female friendship and a love story that spans two decades and continents against a backdrop of political turmoil and a fast-changing world.

Mama always said I was punishment for her mixing ancestral worship with her Christian faith. She’d sought the counsel of native medicine men, worn amulets, and prayed to Ala and other deities to give her a daughter, even though she’d been an active member of her church. Her father still had a shrine in his compound although he had sent all his children to the missionary school in their village. And so in anger, the gods had connived and sent her a daughter identical to her in looks but nothing like what she wanted.

When Gozie and Obianuju meet in August 1978, it is nothing short of fate. He is the perfect man: charismatic, handsome, Christian, and – most importantly – Igbo. He reminds her of her beloved Uncle Ikenna, her mother’s brother who disappeared fighting in the Civil War that devastated Nigeria less than a decade before. It is why, when Gozie asks her to marry him within months of meeting, she says yes, despite her lingering and uncertain feelings for Akin – a man her mother would never accept, as his tribe fought on the other side of the war. Akin makes her feel heard, understood, intelligent; Gozie makes her heart flutter.

For Uju, the daughter her mother never wanted, marriage would mean the attainment of that long elusive state of womanhood, and something else she has desired all her life – her mother’s approval. All will be well; he is the perfect match, the country will soon be democratic again and the economy is growing, or so she thinks …

‘Aiwanose Odafen has written a gripping story that holds a mirror to society, reflecting the harsh realities of gender inequality in our society. The book forces us to reckon with the pervasiveness of violence against women and girls, which remains one of the most significant human rights violations impacting millions globally. Yet rather than perpetuate a victim’s narrative, Tomorrow I Became a Woman is a survivor’s story of self-determination, reminding us all of the strength and resilience of women and girls everywhere.’ – Elizabeth Nyamayaro, author of I am a Girl From Africa

Aiwanose Odafen spent a better part of her life wanting to become an economist, an accountant, then an entrepreneur before she discovered her love for writing. She has contributed to published non-fiction works and participated in Chimamanda Ngozi Adichie’s Purple Hibiscus Trust Writing Workshop. She was longlisted for the 2020 Commonwealth Writers Short Story Prize and holds a postgraduate degree from the University of Oxford. When she’s not writing, she’s cheering for Manchester United or watching dramas. Tomorrow I Become a Woman is her debut novel.