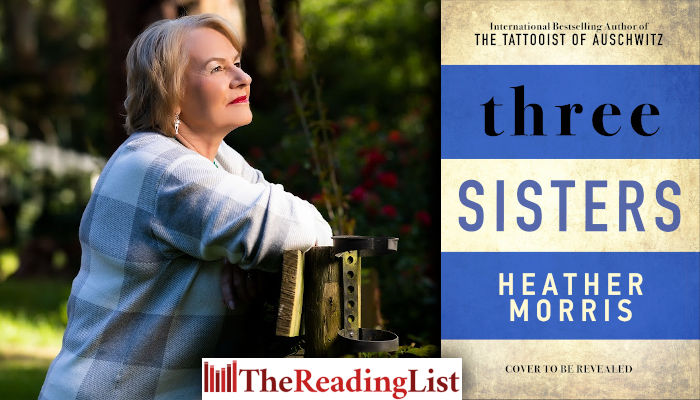 Three Sisters, the astonishing new novel from Heather Morris, will be published in October 2021!

First came The Tattooist of Auschwitz, ​then Cilka’s Journey. The story continues with Three Sisters.

Three Sisters is a novel of breathtaking power that will captivate readers all over the world.

Three Sisters will be published this October in hardback, ebook and audio. It will be a global launch with publication in the UK by Bonnier Books, South Africa by Jonathan Ball Publishers, Australia by Echo, an imprint of Bonnier Book UK, and in the US by St Martin’s Publishing Group.

Rich in vivid detail, Three Sisters is a harrowing yet life-affirming story of survival, of hope and renewal. Two of the sisters are alive today, in Israel, surrounded by family and friends. They have chosen Heather Morris to reimagine their story in her remarkable new novel Three Sisters.

Cibi, Magda and Livia were aged 19, 17 and 15 in 1942, when Livia was ordered to leave their home in Slovakia, to ‘work for the Germans’. Cibi insisted on going with Livia, and the two were sent to the hell of Auschwitz while Magda remained in hiding. In 1944, Magda was captured. The three were reunited in Auschwitz and, as the war turned against the Nazis, were soon sent out on death marches. They had so little, they had suffered such brutality, but they were strong together and found their way home. These determined young women, who had survived so much, emigrated to Israel. There they worked, prospered, found love, had children and grandchildren, always together.

‘I never thought I could find a tale as powerful and overwhelmingly beautiful as those of Lale and Cilka, but a story found me. The day I flew from Johannesburg to Tel Aviv to meet 93-year-old Livi I had no idea what I would discover. The moment I walked into Livi’s apartment, I was greeted with hugs from her, which once again, changed my life.

‘I am truly humbled to be writing the story of the Three Sisters. I thank Livi and Magda for trusting me to tell their story, and for taking the time, over so many hours, to tell it to me. I’m sad that I never met Cibi, but I thank the families of all three sisters, I think I’ve met most of them, for welcoming me into the family, supporting and guiding me as I write.’ – Heather Morris

Margaret Stead, the publisher, says: ‘With Three Sisters Heather has written the novel of her life. That these three sisters experienced so much heartache and suffering in the horror of the Holocaust but survived and went on to live full and happy lives in Israel, is nothing short of miraculous, and Heather has created a sweeping, beautiful, epic novel that brings this powerful true story vividly to life.’

Born in New Zealand, Heather Morris is an international and number one bestselling author, who is passionate about stories of survival, resilience and hope. In 2003, while working in a large public hospital in Melbourne, Morris was introduced to an elderly gentleman who ‘might just have a story worth telling’. The day she met Lale Sokolov changed both their lives. Morris used Lale’s story as the basis for The Tattooist of Auschwitz, which has sold six million copies. Her follow-up novel, Cilka’s Journey, has sold more than a million copies worldwide. Morris’s first non-fiction book, Stories of Hope, was published last September.