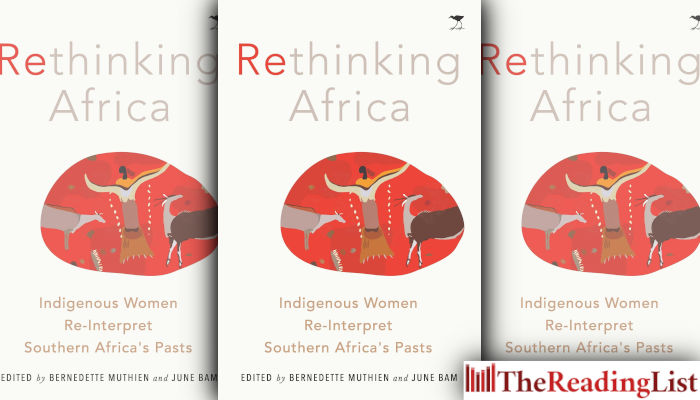 Rethinking Africa: Indigenous Women Re-Interpret Southern Africa’s Pasts, edited by Bernedette Muthien and June Bam, is out in May 2021 from Jacana Media!

This book critically opens new pathways for de-colonial scholarship and the reclamation of indigenous self-definition by women scholars.

Indigenous peoples around the world are often socially and gender egalitarian, matricentric, matrifocal, matrilineal, less violent, beyond heteronormative, ecologically sensitive, and with feminine or two-gender deities or spirits, and more. Bernedette Muthien has contributed to several publications over the years, while Bam has made numerous key contributions in the field of rethinking and rewriting the African past more generally.

In this book, indigenous women write their own herstory, define their own contemporary cultural and socio-economic conditions, and ideate future visions based on their lived realities. All chapters herstoricise the accepted ‘histories’ and theories of how we have come to understand the African past, how to problematise and rethink that discourse, and provide new and different herstorical lenses, philosophies, epistemologies, methodologies and interpretations.

In a first of its kind in Africa and the world, this is collection of essays written by, with and for indigenous southern African women from matricentric societies.

Bernedette Muthien has held executive positions in academia, civil society and the public sector in South Africa and abroad. An accomplished facilitator, researcher and poet with over 200 publications and conference presentations, some of which have been translated into at least 16 other languages. She was the first Fulbright-Amy Biehl Fellow at Stanford University and holds postgraduate degrees in Political Science. She serves on various international advisory boards, including the journals Human Security Studies and Journal of Human Security, as well as the International Institute on Peace Education.

June Bam currently heads the Khoi and San Unit, Centre for African Studies, University of Cape Town. She is the originator of !Gâ re – Rangatiratanga – Dadirri, a project on ‘deep listening’, with fellow indigenous scholars of the Worldwide University Network; a visiting professor with Stanford University’s overseas programme (2014–2020); and co-editor of Whose History Counts (2018), which was the finalist for the National Institute for the Humanities and Social Sciences inaugural awards (2020). Her previous collaborative work, Turning Points in History, won the UNESCO Peace Education Prize for South Africa in 2008.

Penguin Random House is giving away three copies of Becoming by Michelle Obama!

The highly anticipated release of Lift As You Rise by the CEO of Business Leadership South Africa, Bonang Mohale

‘One of the joys of writing is that you can build bridges between people’ – Carol Campbell talks about her new book, The Tortoise Cried its Only Tear