New book alert! Joining the Dots: An Unauthorised Biography of Pravin Gordhan by Jonathan Ancer and Chris Whitfield
More about the book! 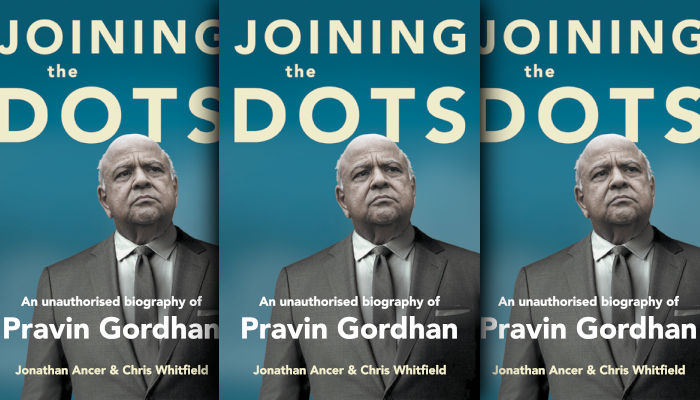 Joining the Dots: An Unauthorised Biography of Pravin Gordhan by Jonathan Ancer and Chris Whitfield is out now from Jonathan Ball Publishers.

Pravin Gordhan has been at the centre of many of the storms that have torn through South Africa’s political landscape. He’s been investigated by the Hawks, fired as finance minister, accused of running a ‘rogue unit’ at SARS and come up against the public protector, to name a few.

Seasoned journalists Jonathan Ancer and Chris Whitfield take a magnifying glass to someone at the centre of this tumultuous period to try to understand the man behind the public image. They go back to Durban in 1949 when Gordhan was born, tracing the significant events and influences that shaped his life and prompted him to become involved in politics as a pharmacy student.

The authors interview former fellow activists to build a picture of the role Gordhan played in the struggle, including his detention and torture. It was during this time he worked closely with Jacob Zuma, the man who would become president and Gordhan’s nemesis and, on the back of a bogus intelligence report, fire him as finance minister.

The book examines why President Cyril Ramaphosa’s right-hand man has been dragged into major controversies and made enemies such as public protector Busisiwe Mkhwebane, Julius Malema and many of those associated with corruption.

Joining the Dots is an in-depth, insightful, gripping and satisfying read about a man who found the courage to stand up to the dark forces of state capture.

Jonathan Ancer is an award-winning journalist who has worked as a reporter at The Star, a features writer for magazines, and a crossword columnist. This is his fourth book.

Chris Whitfield has been a journalist for 40 years and is a former editor of the the Cape Times, the Cape Argus, the Weekend Argus and acting editor of The Witness and the Daily Sun. Prior to becoming an editor he was a political correspondent for The Star. This is his third book.

Both are based in Cape Town.