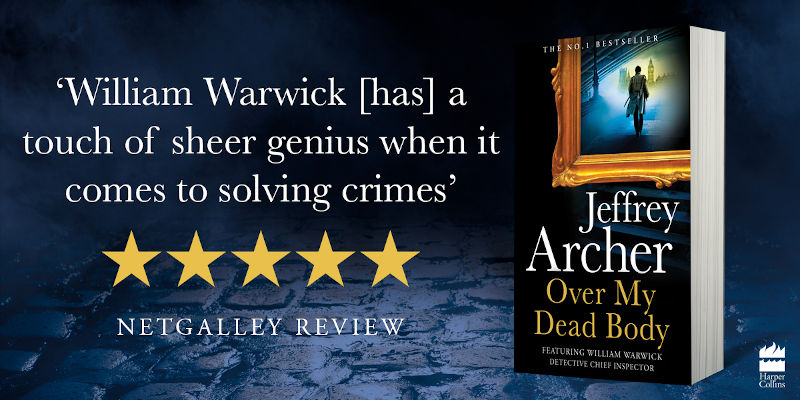 The clock is ticking in this rollercoaster ride of a thriller …

Over My Dead Body is an unputdownable story of murder, revenge and betrayal from international number one bestseller Jeffrey Archer – a rollercoaster thriller which takes detective William Warwick to the cold case unit, where he chases someone who thinks they’ve got away with murder.

Four Cases, Four Killers, only one man can stop them …

In London, the Metropolitan Police have set up a new Unsolved Murders Unit – a cold case squad – to catch the criminals nobody else can. Four victims. Four cases. All killers poised to strike again.

In Geneva, millionaire art collector Miles Faulkner – convicted of forgery and theft – was pronounced dead two months ago. So why is his unscrupulous lawyer still representing a dead client? And who is the mysterious man his widow is planning to marry?

On board luxury cruise liner The Alden, a wealthy clientele have signed up the for opulence and glamour of a trans-Atlantic voyage. But the battle for power at the heart of a wealthy dynasty is about to turn to murder.

And at the heart of all three investigations lies Detective Chief Inspector William Warwick, rising star of the Met.

Only Warwick’s genius for deductive reasoning, his fierce intelligence and his occasionally rash bravery – combined with that of ex-undercover operative Ross Hogan, reluctantly brought in from the cold – can bring the criminals to justice, and put his nemesis behind bars. But can they catch the killers before it’s too late?”