New book alert! Fortunes: The Rise and Rise of Afrikaner Tycoons by Ebbe Dommisse
More about the book! 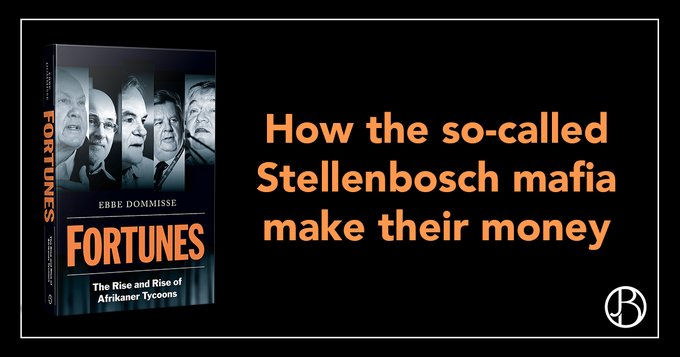 Fortunes: The Rise and Rise of Afrikaner Tycoons by Ebbe Dommisse is out now from Jonathan Ball Publishers.

The past three decades have seen a remarkable rise of Afrikaners in business. In light of the government’s comprehensive black economic empowerment programme this has been one of the unexpected features of the South African economy.

Today many of these Afrikaner tycoons are competing internationally. With Koos Bekker at its helm, media group Naspers began dominating the Johannesburg Stock Exchange and was turned into a global consumer internet group. Johann Rupert strongly extended Richemont’s share internationally in the upper-end market of luxury goods, while Christo Wiese and Whitey Basson at Pepkor and Shoprite became Africa’s largest clothing and food retailers.

Fortunes describes how these and other business leaders, such as Jannie Mouton, Michiel le Roux, Douw Steyn, Roelof Botha, Hendrik du Toit and a number of commercial farmers, built their empires. It looks at their life and business philosophies and what makes them such successful entrepreneurs.

Recent years have also seen the sensational collapse of Steinhoff International, the furniture retailer led by Markus Jooste that destroyed some of these fortunes. While Jooste is the topic of one of the chapters, another looks at the philanthropic projects most of these tycoons are involved in.

Ebbe Dommisse is the author of the bestselling Anton Rupert: A Biography and several other books. After a career of 40 years in journalism, he retired as editor-in-chief of the Cape Town daily Die Burger. He grew up in Carnarvon in the Karoo and matriculated at Boys’ High School in Paarl. Dommisse has a Master’s degree from the Journalism School at Columbia University in New York and a PhD from the University of Stellenbosch. Dommisse received the Phil Weber Award, Naspers’ highest accolade.