New book alert! Across the Kala Pani – Shevlyn Mottai draws on her ancestors’ history to highlight the bonds formed between women during adversity
More about the book! 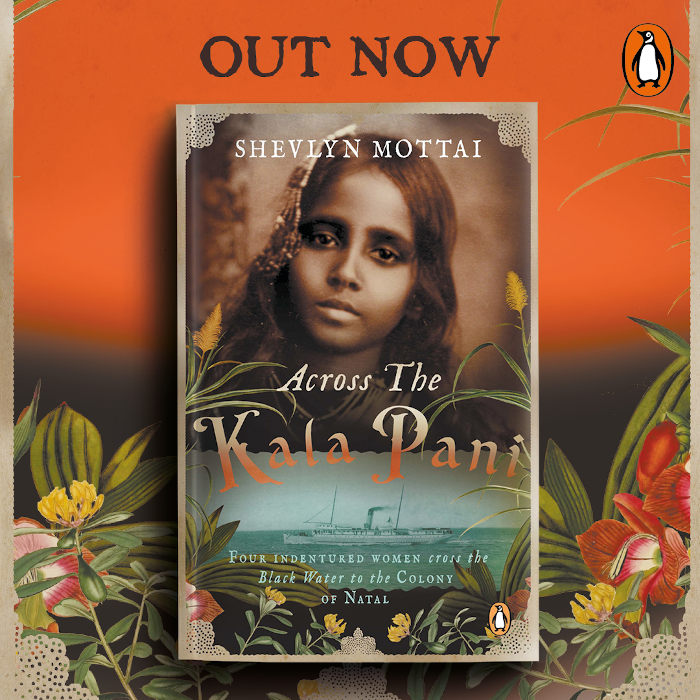 Across the Kala Pani, the debut novel by Shevlyn Mottai, is out now from Penguin Random House!

In Across the Kala Pani, Mottai draws on her ancestors’ history to highlight the bonds formed between women during adversity, and to celebrate their journeys of tragedy and triumph.

Based on the experiences of the author’s great-grandparents, this sweeping historical novel is an epic saga about four women who become part of the Indian diaspora ending up on the plantations of Natal, South Africa.

In 1909, four women board a ship in Madras to cross the Kala Pani, the ‘black water’, to Natal.

Lutchmee, a young widow, has escaped her vengeful mother-in-law and self-immolation on her husband’s funeral pyre. Vottie, from the Brahmin caste, is an educated girl whose abusive husband tries to hold on to his caste at all costs. Chinmah, heavily pregnant when she boards the ship, is married to an older man as part of an unpaid debt. Dazzling but shy Jyothi is single. On board the ship, the women will form friendships and alliances. They will help each other through trial and trauma, even after they arrive and are separated.

Like many Indians desperate to escape unbearable conditions in their home country, these women are only too eager to believe what they’ve been told: that a better life awaits them in South Africa, where caste doesn’t matter, food is plentiful, and liberty will be theirs after just five years. But the reality of life on the plantations reveals the truth about the crossing: that it is usually a one-way journey, rife with misery, and that the hardship doesn’t end after the ship has dropped anchor in Durban harbour.

The epic stories of these immigrants – the brave, the bold, the kind; the weak, the cruel, the cowardly – are woven into the fabric of South Africa’s Indian population today.

Shevlyn Mottai works as a deputy headteacher and English teacher in a secondary school in England. Born in Pietermaritzburg in 1976, she descends from Indians who were part of the diaspora to South Africa, her forefathers having arrived in Natal through indenture in 1906. She has taken several courses in creative writing and has published poetry and short stories in competitions.