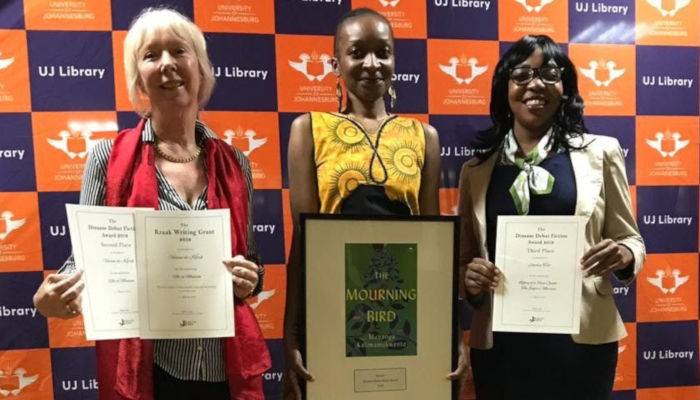 Zambian author Mubanga Kalimamukwento has been announced as the winner of the 2018 Dinaane Debut Fiction Award, for her novel The Mourning Bird.

Kalimamukwento has been awarded R35,000 prize money and publication by Jacana Media, while her winning novel will be supported by Exclusive Books through its Homebru campaign.

‘From the very first page one is struck by how self-assured the writing is, by the fact that the writer never feels the need to strain for effect or over-explicate the issues involved. The depiction is both unflinching and subtle.’

The Kraak Writing Grant went to Vivian de Klerk, author of Not to Mention. The grant is valued at R25,000 and is dedicated to the memory of Gerald Kraak. It offers the recipient mentoring and intensive coaching from Alison Lowry, editor, publishing expert and writer, enabling the author to refine and develop their work still further.

‘I have had a dip into [Not to Mention] and I think there might be something rather wonderful there. I shall look forward to working with the author in due course.’

Third runner-up is Sophia Tao, for her novel Legacy of a Rain Queen: The Eagle’s Martial. Jacana called the manuscript ‘exceptionally well-written and creative’, adding: ‘We have no doubt that her work will be picked up for publication, so keep an eye out!’

Medalie says: ‘The Dinaane Award was formerly known as the EU Literary Award. In 2018 it was revived under a new name and it seemed to me, from the number of entries and level of interest, that it gained a new energy. It drew more than 70 entries. A significant development is that the award was opened for the first time to writers from the SADC countries; consequently, the submissions included novels from, among others, Zimbabwe, Zambia and Botswana.’ 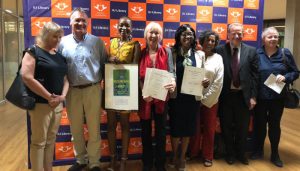 See some tweets from the announcement:

Mubanga Kalimamukwento the winner of #dinaaneaward @JacanaMedia – thanking those who rejected the manuscript because it led her to this moment! 👏🏾👏🏾👏🏾 pic.twitter.com/oND3OLOY5n

It’s done. I am the winner of the Dinaane Debut Fiction Award 2018. This is for my mother, I couldn’t give you a tomb; but you will be immortalized on my first page.