Moonshot – the exclusive, first-hand story of how Pfizer raced to create the first Covid-19 vaccine, told by Pfizer’s CEO Dr Albert Bourla
More about the book! 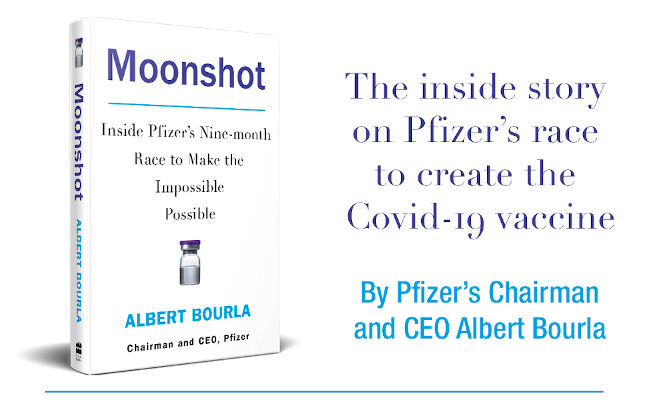 Moonshot: Inside Pfizer’s Nine-Month Race to Make the Impossible Possible by Albert Bourla is out now from Jonathan Ball Publishers.

A riveting, fast-paced, inside look at one of the most incredible private sector achievements in history, Moonshot recounts the intensive nine months in 2020 when the scientists at Pfizer, under the visionary leadership of Dr Albert Bourla, made ‘the impossible possible’ ― creating, testing, and manufacturing a safe and effective Covid-19 vaccine that previously would have taken years to develop.

Bourla chronicles how the brilliant, dedicated minds at Pfizer, under the enormous strains of the global pandemic, overcame a series of crises that were compounded by social and political unrest, and reveals the doubts, decisions, obstacles, and failures they encountered. As Bourla makes clear, Pfizer’s success wasn’t due to luck; it was because of preparation driven by four simple values – Courage, Excellence, Equity, and Joy.

Moonshot is a story of leadership under the most unprecedented circumstances―how Bourla, a Greek immigrant, a child of Holocaust survivors, and a veterinarian, became the head of one of the world’s largest corporations and initiated a dramatic transformation of the organisation just before a global health crisis would serve to test the organization, its scientists and its leader, like never before.

Moonshot describes best practices that can be used to address the multiple, unprecedented challenges our world faces, reveals Pfizer’s implementation of scientific breakthroughs at a record-breaking pace, and offers leadership lessons that can help anyone successfully manage their own seemingly unsolvable problems.

‘I am sharing the story of our moonshot – the challenges we faced, the lessons we learned, and the core values that allowed us to make it happen―in hopes that it might inspire and inform your own moonshot, whatever that may be.’

Dr Albert Bourla became Pfizer CEO in January 2019. He began his career at the company in 1993, in the Animal Health Division as Technical Director of Greece, and has served in numerous executive positions within the company, including Chief Operating Officer, Group President of Pfizer Innovative Health, and Group President of Pfizer’s Global Vaccines, Oncology, and Consumer Healthcare business. He is a Doctor of Veterinary Medicine and holds a PhD in the Biotechnology of Reproduction from the Veterinary School of Aristotle University. In addition to his responsibilities at Pfizer, Bourla is on the executive committee of The Partnership for New York City, a director on multiple boards, including Pfizer, Inc., PhRMA, and Catalyst, a Trustee of the United States Council for International Business, and a member of the Business Roundtable and the Business Council. In 2020, Bourla was named America’s top CEO in the Pharmaceuticals sector by Institutional Investor magazine.