Mission of Malice: My Exodus from KwaSizabantu by Erika Bornman now available as an audiobook!
More about the book! 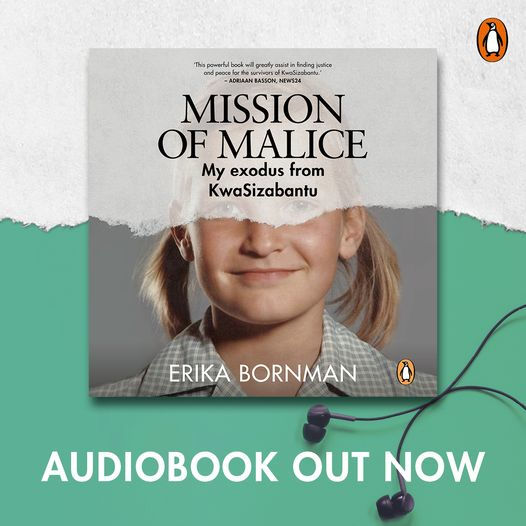 The audiobook of Mission of Malice: My Exodus from KwaSizabantu by Erika Bornman is out now, narrated by Danielle Scheepers.

In Mission of Malice, Bornman chronicles her journey from a fearful young girl to a fierce activist determined to do whatever it takes to save future generations and find personal redemption and self-acceptance.

In the 1980s, Erika Bornman’s family join, and ultimately move to, KwaSizabantu, a Christian mission based in KwaZulu-Natal, which is touted as a nirvana, founded on egalitarian values. But something sinister lurks beneath ‘the place where people are helped’.

Life at KwaSizabantu is hard. Christianity is used to justify harsh punishments and congregants are forced to repent for their sins. Threats of physical violence ensure adherence to stringent rules. Parents are pitted against children. Friendships are discouraged. Isolated and alone, Erika lives in constant fear of eternal damnation.

At 17, her grooming at the hands of a senior mission counsellor begins. For the next five years, KwaSizabantu wages emotional, psychological and sexual warfare on her, until, finally, she manages to break free and walk away at the age of 21.

Escaping a restrictive religious community is difficult, but rehabilitation into ‘normal’ life after a decade of ritual humiliation, brainwashing and abuse is much more painful, as Erika soon discovers. She cannot ignore her knowledge of the grievous human-rights abuses being committed at KwaSizabantu, and so she embarks on a quest to expose the atrocities. With her help, News24 launches a seven-month investigation, culminating in a podcast that will go on to win the internationally renowned One World Media Award for Radio and Podcast in 2021.