Mark Shaw, author of Hitmen for Hire, says the South African state has become entangled in the underworld
More about the book! 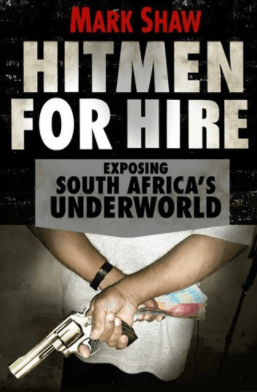 Mark Shaw talks about delving into South Africa’s underworld in his new book, Hitmen for Hire.

In the below video, produced by the Global Initiative Against Transnational Organised Crime, Shaw says his book makes the argument that the state’s intelligence arms and policing structures have been drawn into the underworld.

‘They act for the underworld in some cases; they also propagate violence,’ he says. ‘This is not unique to South Africa, but in a sense this is the area where enormous policy interventions need to come about. I don’t want to say it’s too late in some aspects, but the position is pretty serious.

Contract killing and targeted ‘hits’ in South Africa have become widespread and deeply embedded into parts of the country’s history of systemic corruption. While communities in South Africa have long been witness to persistently high levels of crime and violence, a particular set of ‘mafia-driven’ murders are used to control the country’s political and economic life. Hitmen for Hire exposes the broad nature of South Africa’s underworld and its links to state agents and structures.

Shaw is director of the Global Initiative against Transnational Organised Crime and senior visiting fellow at the London School of Economics and Political Science’s International Drug Policy Project. He was until recently National Research Foundation Professor of Justice and Security at the Centre of Criminology, University of Cape Town, where he is now an adjunct professor.