Mark Gevisser’s seminal book Thabo Mbeki: The Dream Deferred back in print and updated with a brilliant new epilogue
More about the book! 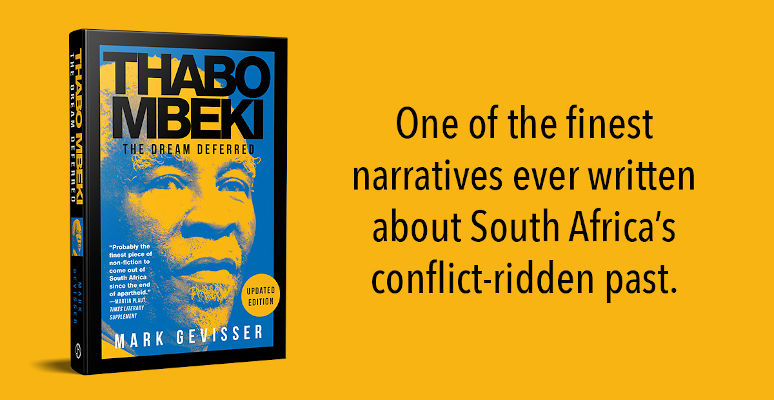 An updated edition of Mark Gevisser’s seminal book Thabo Mbeki: The Dream Deferred is out now from Jonathan Ball Publishers.

‘Was the ANC “captured” by corrupt outsiders who ejected Thabo Mbeki from power and destroyed his legacy? Or is Mbeki himself an author of the misfortune that befell South Africa following his dismissal: not just by facilitating Zuma’s rise to power, but by presiding over an earlier era of patronage and putting into place a particular set of policies and practices that set the scene for what would follow?’

In 2022, Thabo Mbeki turns 80. With an incisive new introduction and epilogue, Mark Gevisser brings this prize-winning biography fully up to date. He sees Mbeki’s spectacular fall from office as a consequence of the ‘disconnect’ that has characterised his entire life.

But he also charts the ‘redemptive fifth act’ of Mbeki’s public life, starting with the moment he was cheered at Nelson Mandela’s funeral at the same time that Jacob Zuma was booed, in 2013. Always a polarising figure, Mbeki remains championed by many South Africans nostalgic about his leadership: Gevisser examines why.

‘What happens to a dream deferred?’ Mbeki often asks, paraphrasing one of his favourite poems by Langston Hughes. After his 2008 ousting, his own dreams seemed to have been shattered. In telling the story of one of South Africa’s most compelling, perplexing, and powerful figures – and the extraordinary family from which he comes – Gevisser has given us one of the finest narratives ever written about South Africa’s conflict-ridden past, its transition to democracy, and its current difficulties.

‘Probably the finest piece of non-fiction to come out of South Africa since the end of apartheid.’ – Martin Plaut, Times Literary Supplement

‘… essential reading for anyone intrigued by South Africa’s complex philosopher-king.’ – The Economist

Mark Gevisser is one of South Africa’s foremost writers. He is the author of five works of non-fiction and his journalism has been widely published in South Africa and abroad. Gevisser has been a Writing Fellow at the University of Pretoria and at the Wits Institute for Social and Economic Research (WISER). Since 2018, he has been a judge on the Gerald Kraak Award for writing on gender, human rights and sexuality in Africa. He lives in Cape Town.