Listen to an excerpt from Ian Rankin’s new Rebus novel A Song for the Dark Times – one of the must-read books of the year
More about the book! 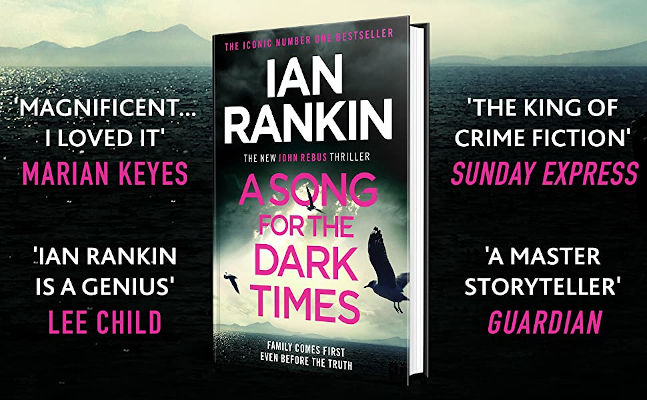 A Song for the Dark Times by Ian Rankin is out now from Jonathan Ball Publishers.

A Song for the Dark Times is a thrilling new Rebus novel about crime, punishment and redemption, from one of the mystery world’s most acclaimed masters.

‘Genius … Only great novels capture the spirit of the age. This is one of them.’ – The Times

When his daughter Samantha calls in the dead of night, John Rebus knows it’s not good news. Her husband has been missing for two days.

Rebus fears the worst – and knows from his lifetime in the police that his daughter will be the prime suspect.

He wasn’t the best father – the job always came first – but now his daughter needs him more than ever. But is he going as a father or a detective?

Ian Rankin is the multimillion-copy worldwide bestseller of over 30 novels and creator of John Rebus. His books have been translated into 36 languages and have been adapted for radio, the stage and the screen. Rankin is the recipient of four Crime Writers’ Association Dagger Awards, including the Diamond Dagger, the United Kingdom’s most prestigious award for crime fiction. In the United States, he has won the celebrated Edgar Award and been shortlisted for the Anthony Award. In Europe, he has won Denmark’s Palle Rosenkrantz Prize, the French Grand Prix du Roman Noir and the German Deutscher Krimipreis. He is the recipient of honorary degrees from universities across the UK, is a Fellow of The Royal Society of Edinburgh and a Fellow of The Royal Society of Literature, and has received an OBE for his services to literature.

Listen to an excerpt from the audiobook here, read by James Macpherson: