Lawfare by Michelle le Roux and Dennis Davis – What happens when SA’s tumultuous political life becomes entangled in the courts of law?
More about the book! 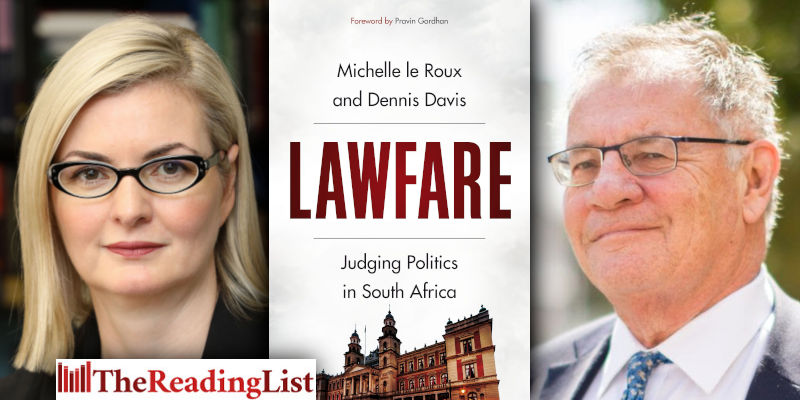 Lawfare: Judging Politics in South Africa by Michelle le Roux and Dennis Davis is out now from Jonathan Ball Publishers.

‘Lawfare is a timely and important work that provokes and confronts the growing debate on constitutionalism and the material transformation of our society.’ – Dikgang Moseneke, former Deputy Chief Justice

What happens when South Africa’s tumultuous political life becomes entangled in the courts of law?

Throughout the past 50 years, the courts have been a battleground for contesting political forces as more and more conflicts that were once fought in Parliament or in streets, or through strikes and media campaigns, find their way to the judiciary.

Certainly, the legal system was used by both the apartheid state and its opponents.

But it is in the post-apartheid era, and in particular under the rule of President Jacob Zuma, that we have witnessed a dramatic increase in ‘lawfare’: the migration of politics to the courts.

The authors show through a series of case studies how just about every aspect of political life ends up in court: the arms deal, the demise of the Scorpions, the Cabinet reshuffle, the expulsion of the EFF from Parliament, the nuclear procurement process, the Cape Town mayor – the list goes on and on.

This book offers a highly readable analysis of some of the most widely publicised and decisive instances of lawfare. It argues that while it is good that the judiciary is able to shoulder the burden of supporting democracy, it is showing signs of immense strain under the present deluge of political cases. Whether the courts will survive this strain undamaged remains to be seen.

Michelle le Roux holds degrees from UCT and New York University, and is a member of the New York and Johannesburg Bars. While practising in New York for nearly a decade, she secured multi-million dollar verdicts for her clients, including victims of discrimination and sexual harassment. Her commercial and antitrust practice has seen her participate in the recent amendment process for the Competition Act. She is an adjunct Professor at UCT, teaching competition law. She is currently acting for NGOs such as the Council for the Advancement of the South African Constitution and Corruption Watch in various state capture-related cases.

Dennis Davis is Judge President of the Competition Appeal Court and Professor of Law at UCT. He presented the highly popular TV programme Judge for Yourself. Davis is a member of the Commission of Enquiry into Tax Structure of South Africa.