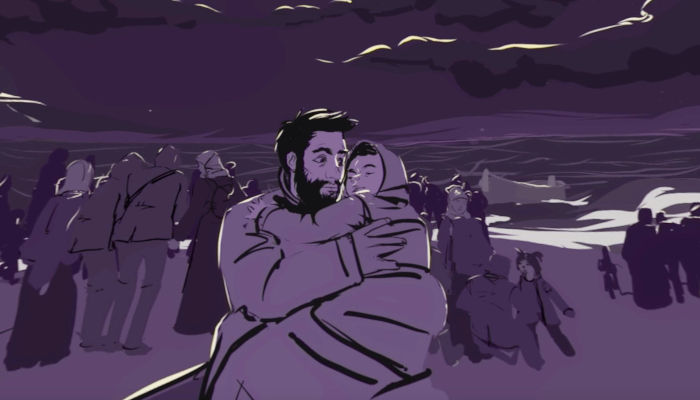 Khaled Hosseini’s Sea Prayer is a short work of fiction for people of all ages from the international bestselling author of The Kite Runner, brought to life by Dan Williams’s beautiful illustrations.

Inspired by the story of Alan Kurdi, the three-year-old Syrian refugee who drowned in the Mediterranean Sea, Hosseini’s new novel is brought to life in virtual reality. 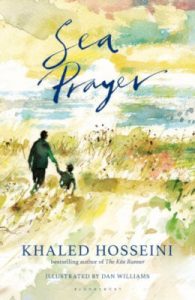 The night before a potentially fatal journey, a father reflects with his son on their life in Syria before the war – and on their unknown future.

On a moonlit beach the father cradles his sleeping son as they wait for dawn to break and a boat to arrive. He speaks to his boy of the long summers of his childhood, recalling his grandfather’s house in Syria, the stirring of olive trees in the breeze, the bleating of his grandmother’s goat, the clanking of her cooking pots. And he remembers, too, the bustling city of Homs with its crowded lanes, its mosque and grand souk, in the days before the sky spat bombs and they had to flee.

When the sun rises they and those around them will gather their possessions and embark on a perilous sea journey in search of a new home.

The book is accompanied by a 360 illustrated film:

Khaled Hosseini is the beloved authors of The Kite Runner, A Thousand Splendid Suns and And the Mountains Echoed. His book have sold over 55 million copies all over the world. Hosseini is a Goodwill Ambassador for UNHCR, the UN Refugee Agency, and the founder of The Khaled Hosseini Foundation, a not-for-profit organisation which provides humanitarian assistance to the people of Afghanistan. He was born in Kabul, Afghanistan, and lives in northern California.

'SEA PRAYER'My newest project, in honor of the 2nd anniversary of Alan Kurdi's drowning, in collaboration with UNHCR, the UN Refugee Agency & The Guardian.Link to how you can take action: http://www.unhcr.org/khaled-hosseini.Full video here: goo.gl/72P3rd

These Things Really Do Happen To Me! Khaya Dlanga chats to Jenny Crwys-Williams about his new book

Join Ton Vosloo for the launch of Across Boundaries in Pretoria