‘Just as Mama wanted, my belly is hidden.’ Read an excerpt from Keletso Mopai’s debut short story collection, If You Keep Digging
More about the book! 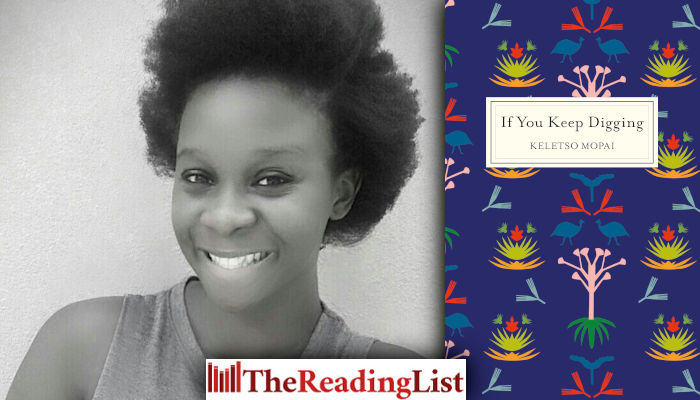 BlackBird Books has shared an excerpt from If You Keep Digging, the debut short story collection by Keletso Mopai!

If You Keep Digging is one of the first books to showcase BlackBird Books’s bold new look!

The new BlackBird Books design is the result of a collaboration with Sindiso Khumalo, a textile designer based in London and Cape Town.

If You Keep Digging will be published in June. Scroll down to read an excerpt.

If You Keep Digging is a moving collection of short stories, which will resonate strongly with a South African audience. The selection of stories highlights marginalised identities and looks at the daily lives of people who may otherwise be forgotten or dismissed.

‘Monkeys’ is a skilful commentary on domestic violence, toxic masculinity, patriarchy (and how it is racialised), power dynamics between white and black men and how children come to ‘know’ that they are white or black. ‘Skinned’, whose protagonist is a woman with albinism, is a powerful story about learning to accept that you deserve love when the world constantly tells you otherwise. In ‘Fourteen’ the author deftly demonstrates the ability to play with concepts of time and reality. It is a compelling story about potential and how one can feel unfulfilled despite having hopes and ambitions.

The collection is also deeply concerned with covering the early post-democracy years in South Africa. Each of the characters deals with questions around the ‘new’ country. The book invites the reader to think about diverse topics and perspectives, difficult family relationships, abandonment, social and class issues, power dynamics at school and at work, mental illness, witchcraft, sexuality, domestic abuse and the ancestral realm, among other things.

Keletso Mopai is a South African storyteller who was born and raised in Lenyenye Township, Limpopo. Her stories appear in highly regarded publications including The Johannesburg Review of Books, DRUM, Omenana Magazine, Brittle Paper, The Kalahari Review and The Ebedi Review. She was shortlisted for the 2017 Writivism Prize and was a finalist for the 2018 Africa Book Club Competition. Keletso has a Bachelor of Science honours degree in geology.

Just as Mama wanted, my belly is hidden. I’m wearing a big white dress that she bought me three days ago. ‘As if this family hasn’t been shamed enough. Everyone will be coming to the funeral. Everyone will know you are pregnant,’ she said, flipping the dress at me. At that moment, I wished she could just lock me in my bedroom so I wouldn’t have to attend the funeral. But I have to bury my brother. Even though the last time we spoke, he didn’t know who I was.

The madman’s sister is pregnant, did you see her? How long do you think she’s been pregnant? Who impregnated her? I’m not surprised she got pregnant at such a young age!

The way people stare at me when I enter the tent for the ceremony, I know that’s how they’ll gossip. When they reach their homes tonight, after Lucky’s body has been lowered into the earth, they’ll talk about the food the caterers have prepared, the ridiculously hot weather, and then my belly.

So why try hide the bump? Should I rather announce to everyone in attendance that one Saturday night, a man I’d never met before grabbed me on my way home, pushed and pressed my body against his car seat, and forced himself on me? That he was so strong, squeezing me down like a shoe crushing a cockroach, that when I tried screaming and kicking, my entire body felt paralysed? That somehow – for a moment while he humped on top of me – I jumped out of my own body and stared down at myself? That I saw myself lying there in his car, helpless?

When I told my mother what had happened, she said I was lying. She said I was a rotten-spoilt-promiscuous drunkard. When I found out I was carrying, she said I was an irresponsible, stupid girl who doesn’t even know who got her pregnant. That I was bewitched. She also said I was sent into this world to make her suffer.

Would people also want to know that every weekend when I was out, I’d find my brother sleeping on cardboard boxes on street corners – all alone, cold and starving? That when I bought him some food and sat with him as he shivered like a street kid hankering for drugs, he’d always ask, ‘What is your name?’ As he stared blankly at me, I always replied, ‘I am Dikeledi – your little sister.’

I always wished I could take him home. But we had learnt to let him be. When his sickness started, he disappeared. I looked all over the township for him. My mother searched and searched for him, thinking he probably got lost in a dump somewhere. But after eight long days, he walked straight through our gate, smelling like a bucket of spoiled porridge. Lucky knew where home was. He just didn’t want to be here. Soon after we bathed, dressed and fed him, he went right back to the streets.

Mama concluded that someone in this township had bewitched him. That this particular wicked witch, who’d stolen his mind away, had died, and taken my brother’s brain to the grave.