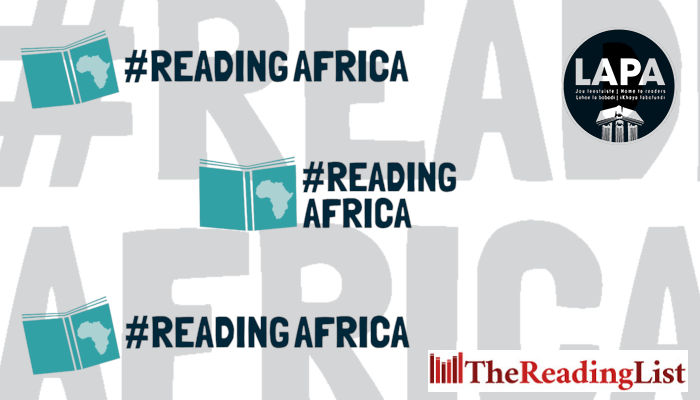 What are you reading at the moment? An old favourite? A new find? An undiscovered classic? Fiction, poetry, comics or essays?

Whatever you’re reading, it’s time to shout it from the rooftops.

Now in its third year, the week-long social media campaign from 1 to 7 December celebrates the diversity of African literature. To join in the fun, show us what you’re reading using the hashtags #ReadingAfrica and #ReadingAfricaWeek.

‘Africa has beautiful stories to tell,’ says LAPA’s Izak de Vries. ‘From Somalia to Cape Town, Timbuktu to Maputo, Africa is bursting with stories. I urge publishers to participate. Let us share our African stories. Let us learn from each other.’

We're just under a month away from #ReadingAfrica Week! We're so excited to have you join us to celebrate the diversity of African literature during the week of Dec 1-7. Visit our website to learn how you can join in! https://t.co/FLDLIKbgbl

African literature is as diverse as the countries that make up the continent. From mystery to romance, from poetry to memoir, from literary to children’s literature, African authors are creating valuable and important work across genres. Wanting to champion and elevate that diverse work, independent publisher Catalyst Press, distributed throughout South Africa by LAPA Publishers, launched the social media campaign #ReadingAfrica, a week-long celebration of African literature. This year will mark the campaign’s third year.

Each year, on the first week of December, Catalyst and its imprint Story Press Africa invite publishers, authors, librarians, literary organisations and book-lovers to share the best in African literature across social media. Using the hashtag #ReadingAfrica, participants shared their favourite books from new releases to classics. Last year, independent publishers from around the world participated, as well as readers eager to share their own book lists, to-be-reads, and old favourites.

‘We see the campaign working in two ways,’ says Catalyst founder Jessica Powers. ‘It’s a wonderful way to build a community among independent publishers who are all working diligently in the literary world to bring global voices to wider audiences. It’s also a fantastic way to spotlight all of the talented authors across the continent.’

Bringing these voices to the forefront is part of Catalyst Press’s work. Founded in 2017 with the mission of publishing books by African writers and those about Africa, Catalyst has always been a champion of the rich variety of work coming from Africa, both in its own list and under Story Press Africa, which it co-publishes in partnership with South African media firm Jive Media Africa. The #ReadingAfrica campaign, launched in the press’s first year, was a natural extension of that work. And by inviting other independent publishers to share books from their own catalogues, Catalyst also hopes the campaign lets readers learn more about the variety of voices coming from independent presses.

Bringing these voices to a wider audience is something that serves both publishers and readers, and working with literary advocacy groups to promote African literature has been an important part of Reading Africa Week. World literature advocate Global Literature in Libraries Initiative (GLLI) has long believed that exposing people to diverse voices enhances them as readers and people, explains GLLI’s acting director Karen Van Drie. The organisation has been a participant in Reading Africa Week since its launch. In recalling the first time she read Chimamanda Ngozi Adichie’s Half of a Yellow Sun, Van Drie says, ‘That book was such a powerful read, it literally changed my self identity, causing me to identify as a global citizen. It remains my favourite book of all time.’ Reading Africa Week is also a chance to expand our reading horizons, Van Drie says. ‘It is a fantastic opportunity to celebrate all of the fascinating people, stories, histories, culture and art of the gigantic African continent. It’s especially useful for non-Africans; we have so many of these authors yet to discover.’

Izak de Vries, Manager of Marketing and Communication at LAPA, says he loves the initiative. ‘Africa has beautiful stories to tell. From Somalia to Cape Town, Timbuktu to Maputo, Africa is bursting with stories. I urge publishers to participate. Let us share our African stories. Let us learn from each other. #ReadingAfrica is like a mini trade fair; driven from your laptop!’

Although the first year’s campaign was largely accomplished through direct outreach, last year’s campaign saw a host of participants far outside of the press’s network. ‘There were participants from all over the US, the UK, and, of course, from throughout Africa. We even coincided with Africa Science Week, so we saw a few scientific papers, too,’ Powers says.

Those interested in participating in the Reading Africa Week campaign can download the campaign’s logo at the Catalyst Press website, and use the hashtags #ReadingAfrica and #ReadingAfricaWeek on posts spotlighting work by African authors. ‘Although the campaign only lasts one week, we’re hoping that people use the hashtag anytime to champion this work,’ Powers says. ‘Reading Africa can and should be something we all do all year long.’

Don’t miss Arundhati Roy, author of The God of Small Things and The Ministry of Utmost Happiness, in Cape Town