Join Dave Muller in East London for the launch of Not Child’s Play: Kidnapped. Held Hostage. A True Story (14 Nov)
More about the book! 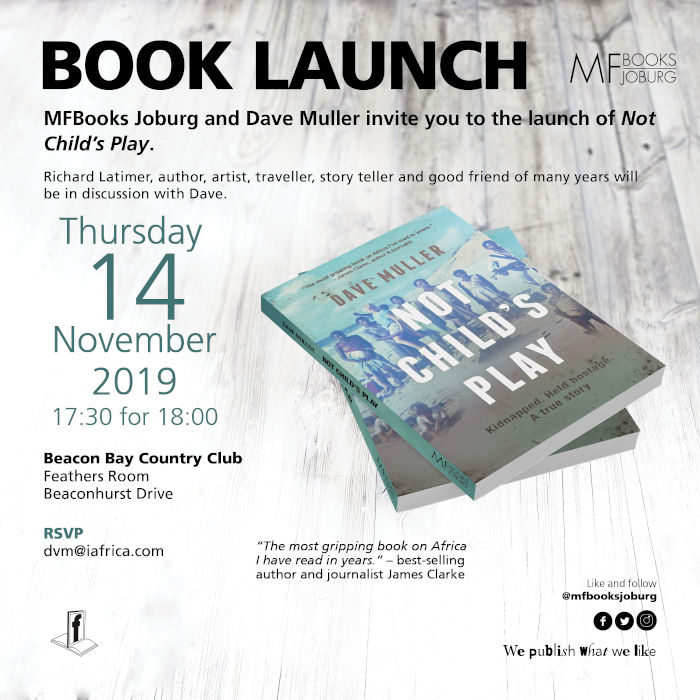 MF Books Joburg and Dave Muller invite you to the launch of Not Child’s Play: Kidnapped. Held Hostage. A True Story.

Muller will be in conversation with author, artist, traveller and good friend Richard Latimer.

‘The most gripping book on Africa I’ve read in years.’ – James Clarke, bestselling author and journalist

In 1990, Dave Muller sails to Mozambique with his wife, Sandy, and two young children, to fulfil a boyhood dream of voyaging to the tropics on the yacht he’s spent 10 years building.

The fantasy holiday comes to a shocking end when the yacht runs aground on a stretch of beach near the Bazaruto Islands. While waiting for high tide to refloat their vessel, a patrol of five child soldiers armed with AK-47s arrive, along with their two adult captives. The young boys ransack the yacht.

Not Child’s Play brilliantly traverses the Mullers’ nightmare of seven weeks as hostages of Renamo, a militant resistance organisation in Mozambique. Dave and Sandy, desperate to protect their children, come close to collapse, plagued by intense mental and emotional strain. The fear of violence and death is a constant. Twice the camp in which they are held is attacked by the warring government forces, Frelimo.

Yet, after 49 days, the family becomes strangely comfortable in their captivity. The Mullers’ eventual rescue, which etched their names in history and is retold remarkably here, involved a covert operation by the SA Navy and Navy Seals – the kind of dramatic stuff that Hollywood action movies are made of!