‘I wanted it to be controversial’: Kalim Rajab explains the title of his book on Harry Oppenheimer – A Man of Africa
More about the book! 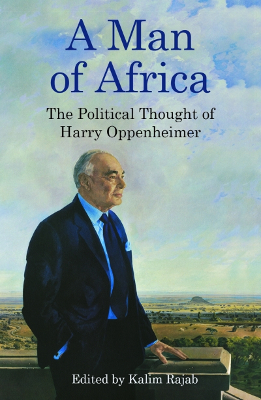 In A Man of Africa: The Political Thought of Harry Oppenheimer, Kalim Rajab looks at the influential role the prominent businessman played in twentieth century South Africa.

Rajab is a writer and corporate executive who has worked at De Beers in London and as personal assistant to Nicky Oppenheimer.

Rajab said he was fascinated specifically by one aspect of Oppenheimer’s life, adding: ‘Not much has been written about his political contribution both during apartheid and crucially after, during the transition.’

In the book, Oppenheimer’s life is explored via extracts from his speeches, and is followed by an assessment by prominent South Africans such as Clem Sunter, Kgalema Motlanthe, Albie Sachs, Denis Beckett, Bobby Godsell, Jonathan Jansen and Xolela Mangcu.

In his section Sachs says that during the Struggle Oppenheimer was ‘the man we loved to hate,’ and that he got the best of both worlds during apartheid.

He added: ‘I chose it because it’s a phrase which I think Oppenheimer himself would have put forward for people to debate about where he fitted in.

‘Sir Ernest Oppenheimer, his father, was very clear that when he came here from Germany he became an African, and he talks about his clothes now being filled with African soil. This is not just a romantic thing. It’s very deliberately showing a distinction between him and the Randlords who preceded him, who came from England usually but saw themselves as part of Empire, and part of Britain. Ernest Oppenheimer was very different to that, in terms of setting roots here.

‘He also said, I am an African, if this country sinks I go down with it. So that’s why I felt there was some basis to calling this book A Man of Africa.’