‘I should have taken the money from mlungu.’ Read an excerpt from Arushi Raina’s debut novel, When Morning Comes
More about the book! 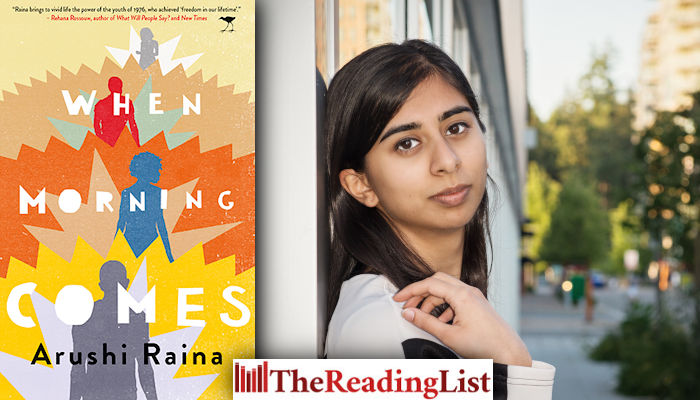 Written from the points of view of four young people living in Johannesburg and Soweto – Zanele, a black female student organiser, Mina, of South Asian background working at her father’s shop, Jack, an Oxford-bound white student, and Thabo, a tsotsi – this book explores the roots of the Soweto Uprising and the edifice of apartheid in a South Africa about to explode.

In Soweto, Zanele, who also works as a nightclub singer, is plotting against the apartheid government. The police can’t know. Her mother and sister can’t know. No one can know.

On the affluent white side of town, Jack Craven plans to spend the last days of his break before university burning miles on his beat-up Mustang, and crashing other people’s parties.

Their chance meeting changes everything.

Already a chain of events are in motion: a failed plot, a murdered teacher, a powerful police agent with a vendetta, and a secret network of students across the township. The students will rise. And there will be violence when morning comes.

Introducing readers to a remarkable young literary talent, When Morning Comes offers an impeccably researched and vivid snapshot of South African society on the eve of the uprising that changed it forever.

It was the same mlungu from the shebeen, because he almost choked when he saw me.

I sat on Mama’s bed, waiting for them to finish eating, so we could clean up. The boy’s mother told us to wait until she called us. That Afrikaans man ate a lot, and the boy’s family laughed at everything he said. The boy said very little, and smiled like he agreed with everything that was said.

This meal was going to take some time.

The door opened and the mlungu stood there. Because he was tall, he took up most of the doorway, blocking the light from the corridor. He had a neat haircut and expressionless eyes. You could tell he was very pale but spent time at the beach to hide it.

He wasn’t in a hurry to say anything.

I looked at his hands. He put them in the pockets of his trousers, stretching the fabric.

‘You’re not allowed to be here,’ I said.

‘Sorry,’ he said. His voice was more careful now than that time at the shebeen.

‘So why are you waiting here? Go finish your dessert. Those Boers are waiting.’

‘I will, don’t worry.’ He smiled, stopped leaning against the doorway. ‘Look, we both know why I’m here.’

‘I don’t know. Maybe you are here to show me the real colour of your face, in case I was confused at the shebeen.’

‘Look. That was just some face paint. It was just one of my friend’s stupid jokes, nothing more.’

‘My mother and I will come here next time with our faces painted white,’ I said. Then, imitating his voice, ‘It will just be a stupid joke.’

He said nothing for a while, his eyes fixed on my face. ‘Look, I’m sorry.’ Then, in a more hesitant voice, a voice that I didn’t trust, he continued. ‘Anyway, it wouldn’t be a good idea to mention what happened.’

‘Why? Because the government people would like to know you go to shebeens in your spare time and paint your face.’

‘Look, there’s no reason to create a scene.’ His voice had become soft and even. It was hard to tell what he really meant.

I got up from the bed.

‘I’m sure I could also make it worth your while,’ he said, reaching for his wallet.

I pushed the door hard and it hit him.

I should have taken the money from mlungu. The problem was that I was too proud for Soweto, too proud for Johannesburg. The whole of Africa. That’s what Thabo said.