‘I remember exactly where I was when I heard that my father had died’ – Read an excerpt from The Pearl Sister
More about the book! 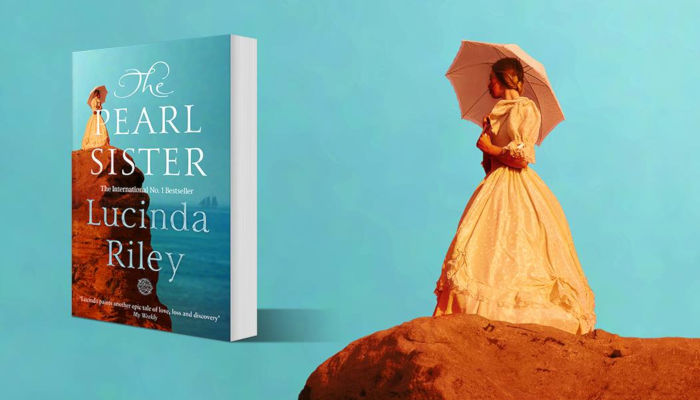 CeCe D’Aplièse has never felt she fitted in anywhere. Following the death of her father, the elusive billionaire Pa Salt – so-called by the six daughters he adopted from around the globe and named after the Seven Sisters star cluster – she finds herself at breaking point. Dropping out of art college, CeCe watches as Star, her beloved sister, distances herself to follow her new love, leaving her completely alone.

I remember exactly where I was and what I was doing when I heard that my father had died, I thought to myself as I stared out of the window and saw the complete blackness of night. Intermittently below me, there were small clusters of twinkling lights indicating human habitation, each light containing a life, a family, a set of friends …

None of which I felt I had any longer.

It was almost like seeing the world upside down, because the lights below the plane resembled less brilliant facsimiles of the stars above me. This reminded me of the fact that one of my tutors at art college had once told me that I painted as if I couldn’t see what was in front of me. He was right. I couldn’t. The pictures appeared in my mind, not in reality. Often, they didn’t take animal, mineral, or even human form, but the images were strong, and I always felt compelled to follow them through.

Like that great pile of junk I’d collected from scrap yards around London and housed in my studio at the apartment. I had spent weeks trying to work out exactly how all the pieces should be placed together. It was like working on a giant Rubik’s Cube, though the raw ingredients were comprised of a smelly oil can, an old Guy Fawkes scarecrow, a tire, and a rusting metal pickax. I’d constantly moved the bits into place, happy right up until I added that last vital piece, which always—wherever I put it—seemed to ruin the entire installation.

I laid my hot brow against the cool Perspex of the window, which was all that separated me and everyone else on the plane from asphyxiation and certain death.

We are so vulnerable …

No, CeCe, I cautioned myself harshly as panic rose inside me, you can do this without her, you really can.

I forced my thoughts back to Pa Salt, because given my ingrained fear of flying, thinking about the moment I heard he’d died was—in a weird way—comforting. If the worst happened and the plane dropped from the sky, killing us all, at least he might be there on the other side, waiting for me. He’d already made the journey up there, after all. And he’d made it alone, as we all did.

I’d been pulling on my jeans when the call had come from my younger sister Tiggy, telling me that Pa Salt was dead. Looking back now, I was pretty sure that none of what she said really sank in. All I could think of was how I’d tell Star, who had adored our father. I knew she would be totally devastated.

You adored him too, CeCe …

And I had. Since my role in life was to protect my more vulnerable sister—she was actually three months older than me but she’d found it difficult to speak, so I’d always spoken for her—I’d sealed up my heart, zipped up my jeans, then walked into the sitting room to tell her.

She’d said nothing, just wept in my arms. I’d done everything I could to keep my own tears at bay. For her, for Star. I’d had to be strong because she’d needed me …

‘Madam, is there something you need?’

A cloud of musky perfume descended from above me. I looked up and saw the stewardess leaning over me.

‘You pressed the call bell,’ she said in an exaggerated whisper, indicating the rest of the passengers, who were all asleep. After all, it was four in the morning, London time.

‘Sorry,’ I whispered back, as I removed my offending elbow from the button that had alerted her. Typical. She gave me the kind of nod I remembered one of my teachers had given me when she’d seen me opening my eyes during morning prayer at school. Then, with a rustle of silk, the stewardess disappeared back to her lair. I did my best to make myself comfortable and close my eyes, wanting to be like the four hundred or so random souls who had managed to escape from the horror of hurtling through the air in an aluminum tube by going to sleep. As usual, I felt left out, not part of the crowd.

Of course, I could have booked into business class. I still had some money left from my legacy—but not enough that I wanted to waste it on just another few centimeters of room. Most of my money had gone toward buying the swanky riverside apartment for me and Star in London. I’d thought that a proper home was what she’d wanted, that it would make her happy, but it so hadn’t …

Now here I was, no farther on than this time last year when I’d sat next to my sister in economy class, flying across the world to Thailand. Except this time Star wasn’t with me, and I wasn’t running to something, I was running away …