I Know This to Be True – what really matters to the most inspiring leaders of our time
More about the book! 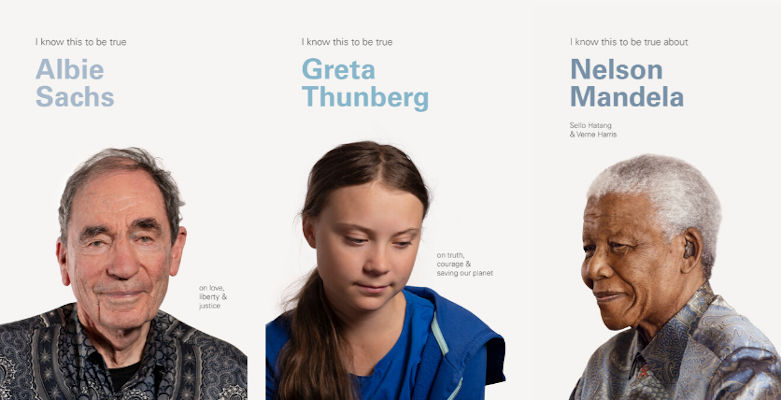 Inspiring individuals share what really matters to them in a new series inspired by Nelson Mandela.

Pan Macmillan SA has partnered with the Nelson Mandela Foundation and Blackwell and Ruth to bring South Africans three books in the I Know This to Be True series.

Across the series of eight books, extraordinary leaders share messages of courage, compassion, humility, hope and generosity aiming to motivate a new generation of leaders ready to create meaningful change.

Former Justice of the Constitutional Court of South Africa Albie Sachs is one of South Africa’s most inspiring social justice advocates. Here, in fascinating detail, he discusses the challenges he has encountered in his life as an anti-apartheid activist, his career in the court, and his role in the emergent new South Africa. From spending more than three months in solitary confinement to surviving an assassination attempt, throughout it all he has remained determinedly optimistic and drawn boundless strength from a deep-seated and unwavering belief in justice. Sachs’s experiences are an enduring symbol of hope and persistence, and provide a potent message that the power of love and generosity can conquer all.

Greta Thunberg: On Truth, Courage and Saving Our Planet

Still a teenager, Greta Thunberg is one of today’s most prominent climate change activists. Her impassioned calls for action on global warming have captured hearts and minds around the world. In this inspiring interview, she discusses the irrefutable facts surrounding climate change, the need to hold political figures and lawmakers accountable and why every person has the power to make a difference. Immovable in her mission, Thunberg’s story is a testament to the power of young voices and proof that, when guided by truth and perseverance, anyone can create meaningful change.

Revolutionary anti-apartheid leader Nelson Mandela devoted his life to ensuring liberation, equality and justice for the people of South Africa. Incarcerated for 27 years, his endurance and faith in a justice to come remain an inspiration to all. Here, two of his former colleagues, Sello Hatang and Verne Harris, share little-known stories from his life as they explore the qualities and disciplines that enabled him to lead a country through seemingly insurmountable challenges. With excerpts from Mandela’s own reflections, this book is a moving reminder of his legacy and encourages every reader to find and nurture the leader within.