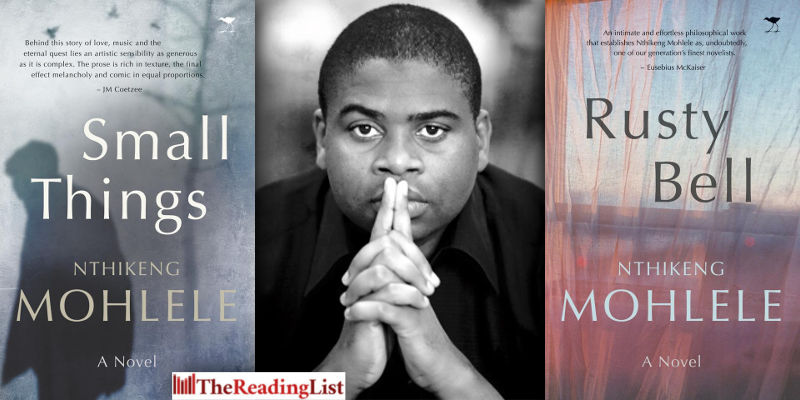 Jacana Media has shared an excerpt from the new edition of Nthikeng Mohlele’s novel Small Things.

This is the story of a dreamer, an average man, singled out by fate for an uncertain life. Jailed for 18 years under apartheid for unspecified sins, he emerges into a world that has no place for him. His fluctuating fortunes land him on the predictable, bitter-winter streets of Johannesburg, where ‘harmlessness’ is an ‘unfortunate trait’ but tempestuous skylines offer space to breathe.

A trumpet and an indigent dog are his accomplices in survival. But it is his obsessive love for the erratic, hard-hearted Desiree that remains the one constant in his life and impels his search for the elusive meaning of existence.

Through his protagonist, the trumpet-playing philosopher poet, Nthikeng Mohlele weaves his unique magic with words, posing powerful questions in his inimitably individualistic and evocative style.

‘Behind this story of love, music and the eternal quest, lies an artistic sensibility as generous as it is complex. The prose is rich in texture, the final effect melancholy and comic in equal proportions.’ – JM Coetzee

Mohlele was partly raised in Limpopo and Tembisa Township, and attended Wits University, where he obtained a Bachelor of Arts in Dramatic Art, Publishing Studies and African Literature. He is the author of four critically acclaimed novels: The Scent of Bliss (2008), Small Things (2013), Rusty Bell (2014), Pleasure (2016) and Michael K (2018). Pleasure won the 2016 University of Johannesburg Main Prize as well as the 2017 K Sello Duiker Memorial Prize. It was also longlisted for the International Dublin Literary Award.

I, in my own determined and peculiar ways, to certain approximate and exact degrees, don’t think much of life. I am, however, never sure if this conclusion is without some blemish, some residue, however faint, of an ounce of madness. To certain inconclusive degrees, it is clear that some of my disappointments awaited me, gathering rust, years before I was born. I have reason to suspect you will find this tale unusual, but not without beauty. Threads of a spider’s web perhaps, to be unwound, cautiously, a skein at a time.

I, to this day, fall hopelessly in love whenever I see postmen carrying mailbags. My heart leaps at bright-red postboxes in pictures. They remind me of Desiree – the postmaster’s daughter. We never exchanged much, Desiree and I. I caught her roving eye on me one morning during Mass. Hearing nothing of the sermon, I saw only this eye, a beaming light bulb that warmed me from the third row, a good twenty metres from where I knelt praying, my knees molten with love.

Seeing her absent-minded, in the company of tedious friends, aroused suspicions that I was in her thoughts. End of term, after the mid-year exams, was marked by forced labour. We cleaned the school grounds and windows in preparation for a new school term. I never joined the gardening or chalkboard-cleaning crews, but always chose to be on the window-cleaning teams, where I could, with good perspective from standing on upside-down dustbins, admire my Desiree shining classroom floors. I got generous compliments from inspecting teachers (windows shone like mirrors against the sun) – who little knew that such workmanship was done in a trance. I was like a spider on a damaged web, doing my utmost to contain my blossoming heart.

It never made sense to me why we had to endure two weeks’ break between school terms – during which I almost turned red with longing. My Desiree would, when my hopes were at their highest, at the fast advancing first day of the new term, come down with swollen tonsils.

This I learnt through considered and disciplined interviews with her friends – slippery and non-committal, like goldfish dodging intruding human hands in ponds. Desiree came back to school (a week of absence!) following the tonsils assault, offered me an orange during lunch. She then woke up brave one morning, handed me a sky-blue homemade card that at first appeared blank. But as I opened it, with the care demanded by heart transplants, I learnt she had drawn a small heart at the centre. Complete with a faint fingerprint and candle wax (a confirmation of feelings known and treasured). Executed in candlelight.

This awoke the poet in me. I, the same evening, penned a love note whose fire assailed the heart. I wrote: ‘My love is deeper than one million seas, brighter than a billion suns, bathed in milk, fanned with tulip bunches. Shared in moderation, for fear of total combustion. Desiree. Desiree. Desiree. Come to my heart. A universe of joy. Lit by a trillion moons.’ I never got a response. She would be moody and aloof.

She then promised me eternal love – ‘When the time is right’. There were times when I was angry and rebellious; yet helpless. I wrote, in yet another carefully worded love letter, that it was unjust that I had to endure such blissful suffering. I never got a response. Desiree was again down with tonsils, away from school for two weeks, which seemed like eight millennia. She never encouraged my pursuit of her, nor did she discourage it. She seemed undecided, bordering on confused. Not all was covered in soot, though. There were moments when Desiree ignited hushed conversations, only too brief to allow me a glimpse of her torturous charms. It is peculiar, I know, but even now, I associate tonsils with love. In hindsight, my love for Desiree is as it always was: maddening. I visited Desiree at the post office, licked hundreds of stamps on letters to imaginary people. I mopped supermarket floors on weekends, ran errands, to earn money to give impetus to my suit. I bought small things; with big intentions. Wrist watches. Earrings. Tonsil prescriptions.

She appreciated the efforts, yet dismissed them as heart-warming but unnecessary. It took me time to learn her emotional compass – which often spun out of control. I hung on, learnt and unlearnt bizarre discoveries, reassuring compromises, brutal rebukes. I could recognise Desiree’s singing or laughter in a hall full of people; even if there was a thunderstorm. She knew this, and I suspect it meant a lot to her. That was why I once inquired if she ever thought of me, to which she, with fire in her eyes, countered: ‘What do I have to do for you to leave me alone?’ I was beyond bliss. The rebuke was a step in the right direction. Preferable to her more direct protests, the famous: ‘Stop staring at me!’