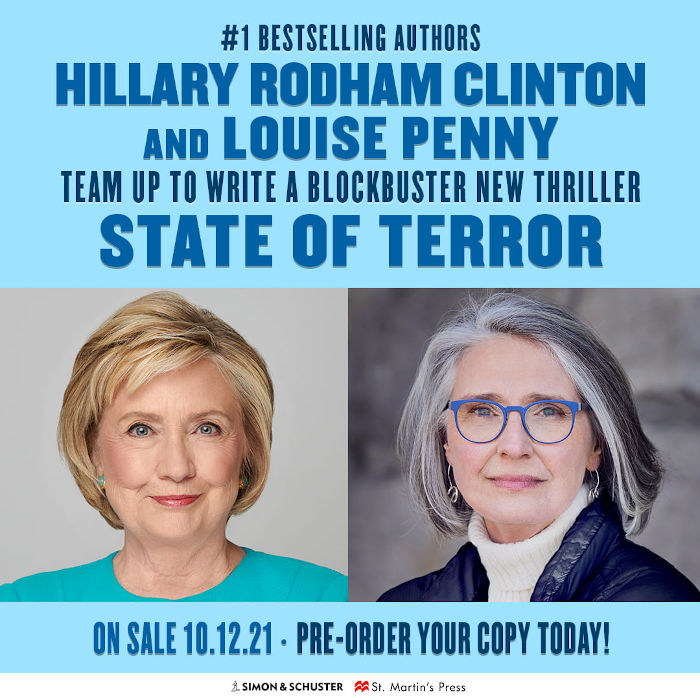 In the book, titled State of Terror, a secretary of state joins the administration of ‘a president inaugurated after four years of American leadership that shrank from the world stage’.

Pan Macmillan is proud to publish a novel written by Hillary Rodham Clinton and Louise Penny. A unique collaboration by two long-time friends and thriller aficionados, State of Terror will be published on 12 October 2021 in the US jointly by St Martin’s Press and Simon & Schuster, and in the UK and rest of world by Pan Macmillan.

The story follows a novice Secretary of State who has joined the administration of her rival, a president inaugurated after four years of American leadership that shrank from the world stage. A series of terrorist attacks throws the global order into disarray, and the Secretary is tasked with assembling a team to unravel the deadly conspiracy, a scheme carefully designed to take advantage of an American government dangerously out of touch and out of power in the places where it counts the most.

This high-stakes thriller of international intrigue features behind-the-scenes global drama informed by details only an insider could know.

‘When it was suggested my friend Hillary and I write a political thriller together, I could not say yes fast enough. What an incredible experience, to get inside the State Department. Inside the White House. Inside the mind of the Secretary of State as high stake crises explode. Before we started, we talked about her time as Secretary of State. What was her worst nightmare? State of Terror is the answer.’

‘Writing a thriller with Louise is a dream come true. I’ve relished every one of her books and their characters, as well as her friendship. Now we’re joining our experiences to explore the complex world of high stakes diplomacy and treachery. All is not as it first appears.’

Jeremy Trevathan, Pan Macmillan publisher, comments, ‘State of Terror is as exciting a proposal for a global thriller as I have ever read. The scope, ingenuity and ambition reflects the strength of the creative chemistry that exists between Hillary Clinton and Louise Penny. It’s a unique pairing of global real life experience at the highest level and brilliantly honed narrative craft. The characters, their nuanced backstories and the tense, all-too-believable plot leap off the page. This is emphatically a story for our times and we are confident it will establish itself as a bestseller for years to come, read both by thriller fans and by Hillary Clinton’s and Louise Penny’s legions of admirers around the world.’

In a joint statement, Jonathan Karp, President and Chief Executive Officer of Simon & Schuster, and Don Weisberg, Chief Executive Officer of Macmillan Trade Publishers, say, ‘When we read Louise Penny and Hillary Clinton’s outline for State of Terror, it was immediately clear that when an ingenious novelist goes to work with one of the world’s most knowledgeable leaders, the results are kinetic. We are delighted to be part of this exciting publishing relationship, and we expect State of Terror to thrill legions of readers throughout the world.’

Simon & Schuster, St Martin’s and Pan Macmillan acquired World and Audio Rights from Robert B Barnett of Williams & Connolly, who represented Hillary Rodham Clinton, and David Gernert of The Gernert Company, who represented Louise Penny in the deal. Jennifer Enderlin, President and Publisher of the St Martin’s Publishing Group, will edit the novel.

Sign up for Read This! – a new voice note show, hosted by The JRB and Volume

The Friday Night Book Club: ‘The streets of Joburg are paved with gold, but they will have to dig deep to get close to it’ – Read an excerpt from Sue Nyathi’s The Gold Diggers