‘Here’s the boykie before he becomes a Bolshevik’ – Praise for Catching Tadpoles, the extraordinary coming-of-age memoir by Ronnie Kasrils
More about the book! 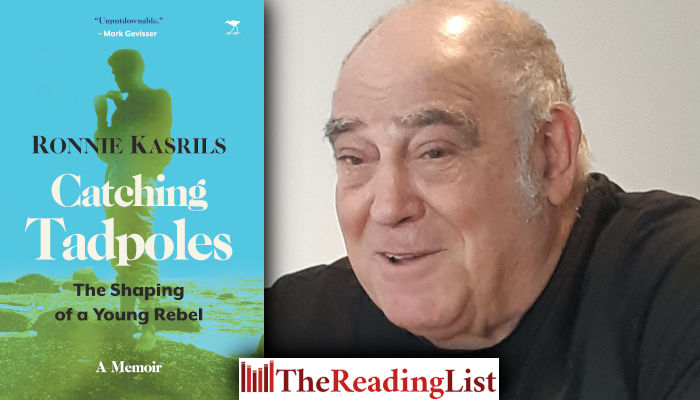 Catching Tadpoles: The Shaping of a Young Rebel, Ronnie Kasrils’s new memoir, reflects on the compelling questions that turned a white youngster from a modest background into a lifelong revolutionary.

The book has been read and loved by the who’s who of South African letters, including Ashwin Desai, Pallo Jordan, Breyten Breytenbach, Mongane Wally Serote and Evita Bezuidenhout!

Read what these luminaries had to say:

‘Occasionally hilarious, often terrifying, sometimes gossipy, always engaging, Catching Tadpoles is a brilliant account of a child growing up in a brutal, unfair system, and at the cusp of adulthood saying: no way, not me, damn their eyes.’ – Richard Poplack

‘Ronnie Kasrils gives us the first 21 years of his life with all the elements that have made him beloved of freedom fighters and book readers alike: his dash, his cunning, his humour, his humanity and – most of all – his irrepressible joie de vivre. He comes of age, he comes to political consciousness and he brings his early worlds – from Jewish Yeoville to Bohemian Joburg – to life. Unputdownable.’ – Mark Gevisser

‘Catching Tadpoles is beautiful because Kasrils is impossible; disarmed but more dangerous with pen than a rusting Makarov.’ – Ashwin Desai

I love his story. It is like mine: trauma, tension, fear, fun and belief in something. His was right; mine was never left. I now call him a friend, a patriot en ‘n bietjie mal. – Evita Bezuidenhout

‘The vivid details in these memories are captivating, and from them emerge a coherent narrative of an extraordinary life fully lived. It’s a hugely enjoyable read and reveals a life which South Africans young and old – and others – have so much to learn from.’ – Victoria Brittain, author and journalist

‘In this new work, we get closer to the boykie who grew up whitish to become the man we have come to respect for his steadfast political and existential courage, for his integrity, for his wit and humour, for his fierce commitment to apparently lost causes, for his ability to think and act and engage beyond the limitations of self and of tribe and political expediency and interest. All of the foregoing — and then to be a true writer as well! From this apparent contradiction, he has forged a dialectic for decency.’ – Breyten Breytenbach

‘Radiant and rumbustious, Ronnie wears his youthful heart on his sleeve … a powerful read.’ – Albie Sachs

‘Kasrils’ conscience, his questioning mind and a sense of justice predestined his collision with racial domination and apartheid. A decade of teenaged youthful rebellion was crystallised into active participation in the national liberation struggle by the Sharpeville Massacre of March 1960. Once he had connected the dots, he committed himself, heart and soul, to the struggle to liberate South Africa from racial oppression. In these pages, Kasrils shares with us the social milieu, family and societal values that shaped the mature liberation fighter.’ – Z Pallo Jordan

‘As a young black female author, I am enthralled at how Ronnie managed to use his voice and other resources available to him in order to serve the world and rally for justice. I am immensely captured by the image of a young Ronnie Kasrils who feels so intensely and believes wholeheartedly. That is the kind of young South African that our ancestors wished to pave a way for. We are each called to view and partake actively in our societies with a potent combination of optimism and the relentless activism of a young heart that is on fire.’ – Zanele Njapha, author of An Eye for Love

‘Kasrils is irreverent and irrepressible – the original rebel without a pause.’ – Zapiro

‘In this delightful book, Ronnie Kasrils lifts the veil on the formative years of a revolutionary activist. It is a fascinating read and a rich account of a white boy coming of age in apartheid South Africa. It provides the clues of how this remarkable South African first began to explore the vision of a new and free South Africa.’ – Luli Callinicos, historian and author of The World that made Mandela and Oliver Tambo: Beyond the Engeli Mountains

‘Here’s the boykie before he becomes a Bolshevik. This is Ronnie, not yet Kasrils the ANC guerrilla, anti-apartheid fighter, underground operative. A white Yeoville boyhood lovingly recalled. In its unpretentious way it challenges the fashionable identity politics of our times. We’re more, it gently reminds us, than the early identities into which we’re nurtured. And yet … somehow, always marked by them too. A childhood and adolescence recounted with Kasrils’s eye for detail and an empathetic memory.’ – Jeremy Cronin

‘Many South Africans have wondered what influenced Ronnie Kasrils as a child to have empathy for the underdog and ultimately take on the apartheid state as one of the founding members of Umkhonto we Sizwe in Natal in 1961. The answers lie in Kasrils’s beautifully written narrative of his formative years, which portrays in vivid detail the origins of his early politicisation. A revolutionary had been born in the belly of white apartheid South Africa, who would rise up in defiance of one of the world’s most unjust systems. Catching Tadpoles is an illuminating read which unpacks how it came to be that a few whites, often of Jewish extraction, developed the courage to reject everything they were taught.’ – Shannon Ebrahim, Group Foreign Editor for Independent Media, South Africa

‘Catching Tapoles is a delicious artistic achievement by Ronnie Kasrils on multiple levels: the aesthetic quality of the writing is enviably masterful; the meditation on the psychological quandary of reliable memory is philosophically rich; and the narrative of how a young white boy came to recognise the humanity of all of his fellow citizens regardless of racialised identities – with the concomitant moral and political duties that that awakening brings – will re-inscribe much needed hope into our discourse, making the case again for the possibility of cross-class solidarity in the continued struggle for an anti-racist South Africa.’ – Eusebius McKaiser