He wants to remember. She needs to forget. Read an excerpt from Mr Nobody by Catherine Steadman
More about the book! 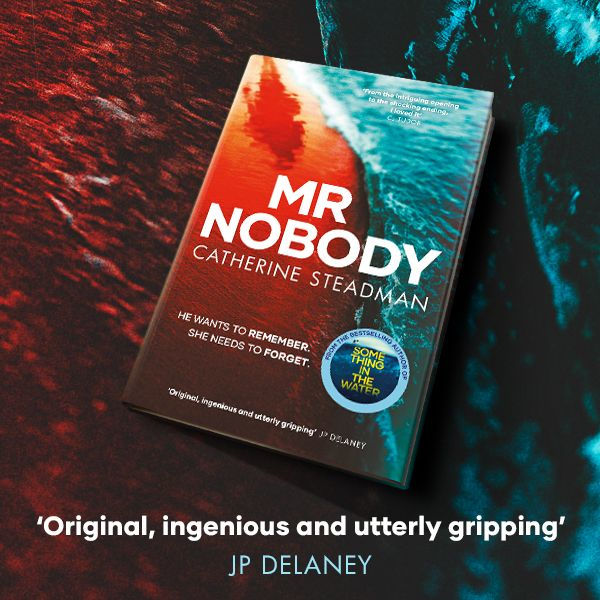 Read an excerpt from Mr Nobody, the new gripping psychological thriller by Catherine Steadman.

Memento meets Sharp Objects in this superb novel, from the bestselling author of Something in the Water.

Catherine Steadman is an actress and writer based in North London. Her debut novel, Something in the Water, was a New York Times bestseller published in 30 countries with film rights optioned by Reese Witherspoon’s production company Hello Sunshine. As an actress, she is known for her roles in Downton Abbey and Tutankhamun, starring alongside Sam Neill, and has also appeared on stage in the West End including Oppenheimer for the RSC, for which she was nominated for a 2016 Laurence Olivier Award.

‘Original, ingenious and utterly gripping, with characters you’ll really care about as they race towards the brilliantly unexpected ending.’ – JP Delaney

‘From the intriguing opening to the shocking ending, I loved it … Fans of The Silent Patient will love it.’ – CJ Tudor

When a man is found on a Norfolk beach, drifting in and out of consciousness, with no identification and unable to speak, interest in him is sparked immediately. From the hospital staff who find themselves inexplicably drawn to him; to international medical experts who are baffled by him; to the national press who call him Mr Nobody; everyone wants answers. Who is this man? And what happened to him?

Neuropsychiatrist Dr Emma Lewis is asked to assess the patient. This is her field of expertise, this is the chance she’s been waiting for and this case could make her name known across the world. But therein lies the danger. Emma left this same small town in Norfolk fourteen years ago and has taken great pains to cover all traces of her past since then.

But now something – or someone – is calling her back. And the more time she spends with her patient, the more alarmed she becomes.

Has she walked into danger?

The bright glare of light as the soft skin of two eyelids part.

A body sprawled on the sand.

The fast flutter of eyelashes as awareness blossoms within and, just like that, he’s awake. Consciousness floods through him; he feels the skin of his cheek pressed against the brittle cold of the beach. Confusion.

Sounds of the sea. Waves crash and pull back, the pop and shhh.

It’s early morning in January. A British beach in the depths of winter. Miles of golden-­white Norfolk shore with the crisp dawn light throwing everything into high definition.

Wind-­borne sand grains blow in architectural ripples across the flats straight into the man’s unprotected face. He squeezes his eyes tight shut against the sting of it.

A hot throb of pain crests sharply inside his skull, and the papery skin around his eyes creases deeper, his forehead puckering, as he flinches from it. The unanticipated pang lengthens, stretching itself inside his head, almost too much to take. A sharp gasp of breath and the pain stabs back, harder. His hot exhale drifting away in the cold sea wind.

He tries to relax into the pain, letting the wave of agony wash through him, over him. And it seems to work; the feeling begins to still within him. He lies there limp on the sand for what seems like an eternity, letting the restless throb slowly quiet.

He hurts everywhere. The ghost of a thought drifts through his mind.

Where am I? It floats gossamer thin in the air, fluttering just beyond his reach.

He takes another cautious breath and tentatively tries to raise his head, careful not to stir the lurking pain nestling in his skull. Damp sand, like candied sugar crystals, sticks to his stubbled cheek as he shifts his weight up onto aching forearms, cautiously testing the limit of their strength as he squints out into the morning light.

How did I get here?

Gulls skip along the sand as he searches the landscape for an answer—­but nothing here looks familiar.

He takes in the silent forest that backs the beach, its dark canopy beyond unreadable. No clues. No hook to hang understanding on.

Okay. Where was I before I was here?

He looks up at the haunting grey vault of winter sky hanging overhead and wonders if he might be dreaming. If he might be in bed, safe back at home, wherever that might be. But the clouds look back, heavy and full of rain. He shivers.

It is only now that he notices his clothes are wet, their sodden fabric clammy against his skin. He shudders, cold to his bones. He must move, he knows that much, he must get warm, or risk freezing in this weather.

He needs shelter. He looks back toward the trees that skirt the beach. The wind whips sharp needles of sand into his skin, tiny pinpricks against his numbed flesh.

Struggling clumsily to his feet, he begins to process the extent of his injuries as each muscle is asked to move.

Upright, he hesitates. He turns in a small circle, checking the sand around where he lay. A natural instinct telling him to look, nothing more. To look for things he may have lost, belongings left behind, although what those would be he does not know. But then, he must have some belongings, mustn’t he?

He thinks for a second before jabbing his numb hands into his wet pockets.

There must be something.

His pockets are empty. He is momentarily flummoxed into inaction.

Wait. What the hell is going on?

He runs a quick hand through his damp hair, trying to grapple back control of the situation, trying to wrangle the logic of it. He must remember something, surely? His hand skims the back of his head, and the throb of agony at the base of his skull washes over him again, pinching tight. He sucks in a sharp breath and whips back his hand to see the dark smear on his fingers.

He squeezes his eyes shut, breathing through the pain as it slowly subsides. When he opens his eyes, he notices something, on the other side of his hand. He turns his palm over and there on the back in blue ink – writing. A faint ink mark faded by seawater, a word. He stares down at it, perplexed.

Strange. What does it mean?

The word dances on the tip of his recollection, the answer so close he could almost reach out and grasp it. But it rolls away, out of reach, evasive, mercurial. Like the bright filaments that play on the inside of his eyelids each time he closes them.

He shudders, the cold snapping him back to the immediate situation. He needs shelter.

It will come back, he tells himself. He gives himself a brisk shake and starts to walk inland purposefully.

Wet sand squelches up between his bare toes as he walks, cold and thick like poured concrete. All the while the tendrils of his brain search, delicately, for something to cling onto.

What is the last thing you remember?

Silence. The sound of sea foam bubbling and popping as it dries in the wind.

His thoughts roll on.

How did I end up here?

Did something happen to me?

Suddenly the realisation hits him. He stops abruptly.

He stands frozen, his short brown hair tousled by the wind. His mind races.

Where am I from?

He can’t remember. He looks down quickly at the blood smear across his hand. The word on the other side. The panic rising now with incredible speed.

The weight of what this means bears down on him with each cold snatched breath he takes. Fear pumping through him, primal and quickening.

His world shrinks to a pinhead and then dilates so wide, suddenly terrifyingly borderless. He has no edges anymore. Who is he? He has no self. He feels the panic roaring inside him, escalating, his heart tripping faster. His mind frantically searches for something—­anything—­to grab hold of, his eyes wildly scanning the landscape around him. But there is no escape from it, the void. He is here and there is no before. There are no answers.

Thoughts thrumming, he fumbles to check his empty pockets again. Nothing. No ID, no phone, no wallet, no keys, nothing with a name on it. No way to find out.

He tries to slow his breathing, to stay calm. He tries to think clearly.

He looks up, eyes finding the forest again, and the indent of a path. He sets off, his pace frenetic. He needs to find someone.

He stops abruptly again. A jolt of self-­preservation.

Maybe you’re out here alone for a reason.

He studies the word written on his hand. It is all he has to go on but it is not enough.

Is it a reminder? A warning?

Perhaps something very bad has happened? He thinks of his head wound. If he was attacked, being found wouldn’t be the best idea, at least until he knows what happened, or who he is. He could still be in danger. It’s impossible to tell yet.

He commits the word on his hand to memory and then he rubs the ink away against his wet trousers until the mark is gone. He’ll remember it. Best to cover the evidence in case he’s found.

A memory. That’s what they had told him, but who exactly he can’t recall. He grasps at the memory. Its warning, the threat, so strong and clear.

He chases the thought but it disappears out of sight. He notices his own bare feet beneath him on the sand. A thought surfaces; he remembers reading once that suicides often remove their shoes before killing themselves. Is he a suicide? How he knows the fact about the shoes he does not know. Did he take off his shoes, did he leave them, and his things, and his life, in a tidy pile somewhere? Abandoned? But why would he do that? He doesn’t feel sad. He doesn’t feel like the kind of person who would kill himself. But then, maybe nobody ever does?

Another memory flashes out of the darkness. A burst of something. Someone telling him.

You need to find her.

Find her? He straightens. It’s a crystal-­clear directive. A purpose.

Is that why I’m here? To find someone? Who is she to me?

He thinks of the word he removed from the back of his hand, and blinks.

Why do I need to find her?

The memory is what it is. There is no more. Whoever she is, he needs to find her.

They must have said more.

He tries to force the memory but the throb awakens deep at the base of his skull. He lets the thought go.

All he knows is he was told by someone, instructed by someone … he can’t remember who told him, or what they sounded like, or their face. But he trusted them, he knows that much.

How can he find her – ­this woman – if he doesn’t know who or what he’s looking for?