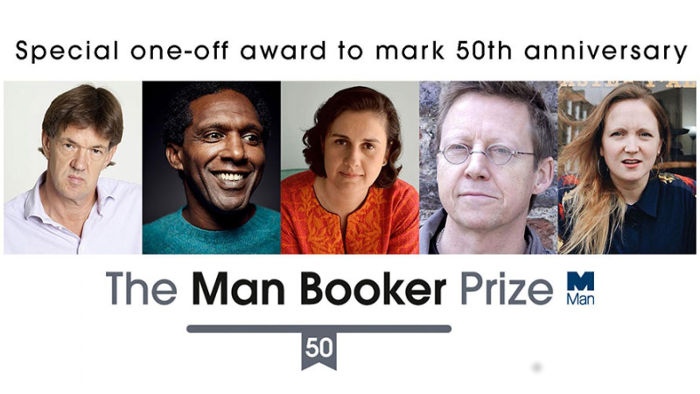 The new prize, announced as part of the literary award’s 50th anniversary celebrations, will be judged by decade, with the final five books being put to public vote.

The Golden Booker aims to discover which of the 51 novels ‘has stood the test of time, remaining relevant to readers today’.

Each judge will select one book from their particular decade, and a ‘Golden Five’ shortlist will be announced at the Hay Festival on 26 May 2018.

The five books will then be put to a month-long public vote from 26 May to 25 June 2018 on the Man Booker Prize website to decide the overall winner, to be announced at the Man Booker 50 Festival on 8 July 2018.

‘The very best fiction endures and resonates with readers long after it is written,’ Baroness Helena Kennedy, Chair of the Booker Prize Foundation, says. ‘I’m fascinated to see what our panel of excellent judges – including writers and poets, broadcasters and editors – and the readers of today make of the winners of the past, as they revisit the rich Man Booker library.’

The Booker Prize has previously run two special awards, The Best of Booker Award, marking the prize’s 40th anniversary in 2008, and the Booker of Bookers in 1993, for its 25th birthday. Both prizes were won by Salman Rushdie, for Midnight’s Children, which won the Booker 1981.

Other authors with a bit of an edge for the Golden Booker are Hilary Mantel, JM Coetzee and Peter Carey, who have all won the prize twice.

The Complete List of the Man Booker Winners since 1968

2017
Lincoln in the Bardo by George Saunders (United States)

2015
A Brief History of Seven Killings by Marlon James (Jamaica)

2012
Bring Up The Bodies by Hilary Mantel (United Kingdom)

2011
The Sense of an Ending by Julian Barnes (United Kingdom)

2007
The Gathering by Anne Enright (Ireland)

2006
The Inheritance of Loss by Kiran Desai (India)

2004
The Line of Beauty by Allan Hollinghurst (United Kingdom)

2001
True History of the Kelly Gang by Peter Carey (Australia)

1997
The God of Small Things by Arundhati Roy (India)

1994
How Late It Was, How Late by James Kelman (United Kingdom)

*Current rules stipulate that the prize may not be divided.

1990
Possession by AS Byatt (United Kingdom)

1978
The Sea, The Sea by Iris Murdoch (Ireland/United Kingdom)

1973
The Siege of Krishnapur by JG Farrell (United Kingdom/Ireland)

**Current Man Booker Prize rules stipulate that, in order to be considered for the award, the submitted book ‘must be a unified and substantial work’, effectively making short stories ineligible.

***Awarded in 2010. Due to an administrative decision that shifted the Booker Prize eligible publication dates, books published in the year 1970 were excluded from prize consideration for either the 1970 or the 1971 award. In an attempt to rectify the exclusion, in 2010 twenty-two novels published in 1970 were considered for what was deemed ‘The Lost Booker Prize’. JG Farrell’s Troubles was determined to be the winner, and the prize was awarded posthumously.

1969
Something to Answer For by PH Newby (United Kingdom)