Ghost Fire – the brand new novel by Wilbur Smith – an epic story of tragedy, loss, betrayal and courage
More about the book! 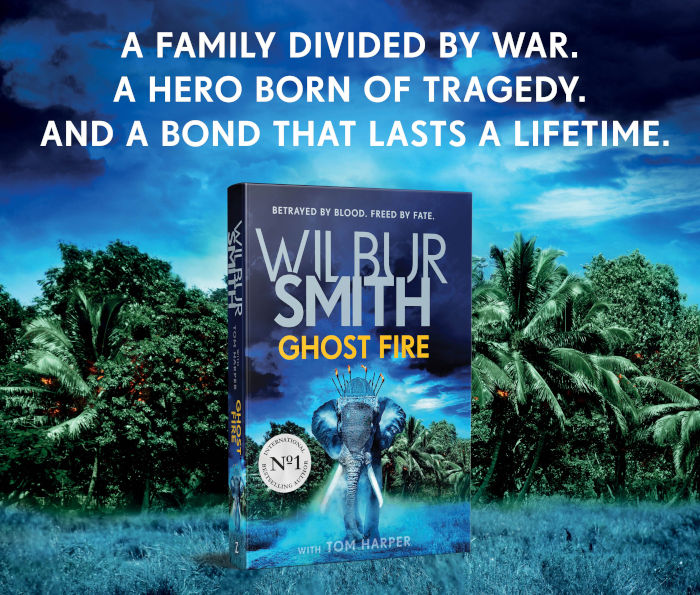 Ghost Fire by bestselling author Wilbur Smith is out from Jonathan Ball Publishers on 22 August 2019!

A family divided by war. A hero born of tragedy. A bond that lasts a lifetime.

1754. Inseparable since birth and growing up in India, Theo and Connie Courtney are torn apart by the tragic death of their parents.

Theo, wracked with guilt, seeks salvation in combat and conflict, joining the British in the war against the French and Indian army.

Connie, believing herself abandoned by her brother, and abused and brutalised by a series of corrupt guardians, makes her way to France, where she is welcomed into high society. Here, she once again finds herself at the mercy of vicious men, whose appetite for war and glory lead her to the frontlines of the French battlefield in North America.

As the siblings find their destinies converging once more, they realise that the vengeance and redemption they both desperately seek could cost them their lives …

An epic story of tragedy, loss, betrayal and courage that brings the reader deep into the seething heart of the French and Indian War.

Wilbur Smith is a global phenomenon: a distinguished author with a large and established readership built up over 55 years of writing with sales of over 130 million novels worldwide. Born in Central Africa in 1933, Wilbur became a full-time writer in 1964 following the success of When the Lion Feeds, and has since published 41 global bestsellers, including the Courtney Series, the Ballantyne Series, the Egyptian Se­ries, the Hector Cross Series and many successful standalone novels, all meticulously researched on his numerous expeditions worldwide. His books have now been translated into 26 languages.

Tom Harper is the author of 13 thrillers and historical adventures including The Orpheus Descent, Black River and Lost Temple. Research for his novels has taken him all over the world, from the high Arctic to the heart of the Amazon jungle. He lives with his family in York.

A Woman Makes a Plan: Advice for a Lifetime of Adventure, Beauty, and Success by Maye Musk

All the Money in the World by John Pearson: The true story of the infamous Getty kidnapping

‘An ecological fable for modern times’: Listen to an excerpt from The Melody by Man Booker Prize-shortlisted author Jim Crace