Friday Night Book Club: Some houses have their secrets. But so do some people … Read an excerpt from The Hiding Place by Jenny Quintana
More about the book! 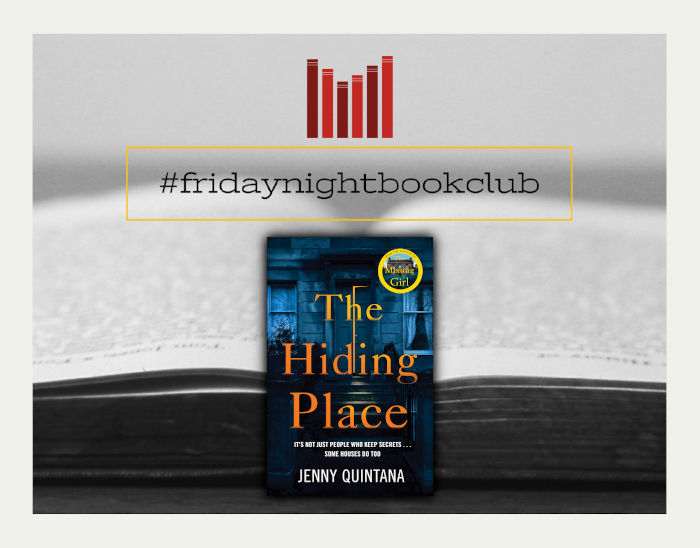 Treat yourself to a glass of wine this evening and this excerpt from The Hiding Place – the spellbinding new novel from bestselling author Jenny Quintana.

From the bestselling author of The Missing Girl and Our Dark Secret, comes The Hiding Place: a story about identity, love, long-buried secrets and lies.

Abandoned as a baby in the hallway of a shared house in London, Marina has never known her parents, and the circumstances of her birth still remain a mystery.

Now an adult, Marina has returned to the house where it all started, determined to find out who she really is. But the walls of this house hold more than memories, and Marina’s reappearance hasn’t gone unnoticed by the other tenants.

Someone is watching Marina. Someone who knows the truth …

The house is still, like a crypt. Only the maple tree moves, branches swaying in the night breeze, leaves trembling and then brightening as a light in the top window flicks on.

Marina parks opposite and switches off the engine. Heart thudding, she opens the door and steps into the street. The midnight air whips her face. Her breath is wispy, like the remnants of a ghost. In the distance, traffic speeds along Streatham High Road. A siren wails.

She has been in Tooting Bec visiting an author whose manuscript she’s editing. Agata is Polish and is writing her memoirs, focusing on the Second World War. Setting off for the drive home to Wiltshire, Marina has taken a detour, speeding through the network of suburban streets, along past the common and into Harrington Gardens.

It’s an ordinary street in a nondescript part of London, with the air of a place battened down for winter. Hedges are scruffy, tendrils trail from the tops of hanging baskets. Rubbish nudges the lids of dustbins. On one path, a rusty pram stands discarded along with a broken cot.

The houses are mostly semis but number 24 is different. Detached. It’s a double-fronted Victorian home with two gables topped with arrowed finials. Spiked iron railings, with gates either side, contain the front garden with its modest patch of earth, single maple tree and geometric path. Stone steps lead to a massive front door; metal stairs to the entrance to the basement. To the right, a public footpath separates it from the house next door. An estate agent’s fallen sign rests on the ground. Flat 2. To Let.

Automatically, Marina compares the reality before her to the photographs she’s seen in newspapers. But those grainy images were mere reproductions, while this building is solid and stamps its importance on the street.

Marina crosses the road. The house is in darkness save for the light on the second floor and a cobwebbed lantern above the front door, but it’s enough to notice the crumbling cornices and cracked stained glass. The bricks need repointing, the ledges need repainting and the maple tree needs cutting back.

Three floors and five windows and then the basement.

The light in the top window is turned off. Marina shivers and buttons her faux-fur coat. Her hair hangs abundantly around her face – rich and dark and warm. She wears thick clothes, boots and fingerless gloves, but still the chill of the night creeps inside her bones. Flexing her fingers, she moves beneath a street lamp as if it might give her heat.

Above her, the sky is heavy. Stray snowflakes are falling. She should go home. She should get into her Mini, turn the heating on full blast and speed away from London.

But she does not.

Warily, she steps forward and peers more closely at the house. Along with the set of doorbells – five, she counts, for five flats, there’s a separate bell for the basement – she takes in the original details: the lion-head door knocker with its gaping mouth; the metal bell pull that hangs like a noose; the guillotine blade of the boot scraper.

She considers the people who have lifted the knocker, jangled the bell or scraped their shoes: tenants and visitors. She imagines the figure of a lonely woman, creeping like a spectre up the steps, pushing open the door and leaving her baby inside.

Who would do that?

A weight forms inside her chest. It’s an old question and yet Marina’s body bows beneath the hurt because she knows she was the baby and the woman was her mother.