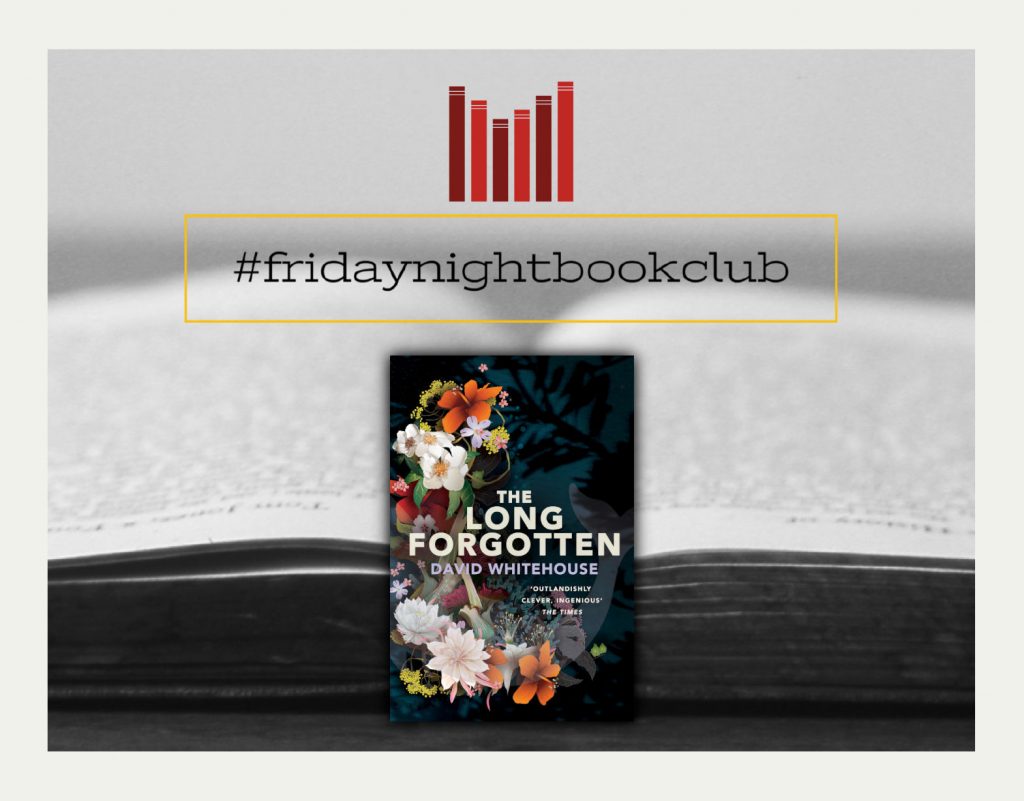 Stay in and get cosy with a glass of wine and this extended excerpt from The Long Forgotten, the third book from multi-award-winning author David Whitehouse.

The Long Forgotten is a sensational novel about love, loss, inheritance and obsession.

When the black box flight recorder of a plane that went missing 30 years ago is found at the bottom of the sea, a young man named Dove begins to remember a past that isn’t his. The memories belong to a rare flower hunter in 1980s New York, whose search led him around the world and ended in tragedy.

Restless and lonely in present-day London, Dove is quickly consumed by the memories, which might just hold the key to the mystery of his own identity and what happened to the passengers on that doomed flight, The Long Forgotten.

Ten thousand feet deep, bones creak with solitude. Professor Cole feels it mounting in his sternum. Concentrating on the short canyon of light carved into blackness by the headlamps on his one-man submersible, he mutters to himself.

‘Everything will be OK. Everything will be all right.’ But it is over an hour since he heard from the research vessel on the surface. Cold with terror, he speaks into the radio receiver, winding the wire tight around his fingers, constricting blood so it bulbs beneath skin.

‘This is Professor Jeremiah Cole. I repeat. Both engines are now down. Emergency buoyancy failed to deploy. Systems monitor says I have eighteen minutes of air left. Do you read me, over?’ An inappropriate calm seeps into his voice, as though thrown there by a benevolent ventriloquist. ‘Do you read me? Over.’ He swipes a cuff across his brow, blotting pinprick diamonds of sweat on the cotton.

The luminous clock telling him approximately how much longer he’ll be alive morphs to seventeen minutes, sixteen, fifteen. How apt, a life entrenched in the academia of oceanography, ending at the bottom of the sea. He punches the monitor until his knuckles split, lets a small blast of air slip his lungs and rues ever embarking on a mission with so many possible failures. Tech glitch. Bad weather. A cataclysmic power outage, like the one be-falling him now. Shouldn’t we be content to live in the smile of the sun instead of reaching out to touch it? He laughs, actually laughs – the oxygen his to waste. Don’t we deserve our fingers burnt?

Wistfully caressing the grid of buttons on the console, he begins to grieve his own demise. This embarrasses him, as though he’s anything other than alone. The blush has an intricate texture.

Twelve minutes of oxygen remaining. He spends the next three pressing the red emergency button, seriously contemplating whether to light the cigarette in his pocket. At the very least, it’d be a spectacular last action for a suffocating man. When he shuts his eyes he can almost hear the delightful piss-on-snow hiss of ash burning. He imagines smoke swirling around the top of the pod, almost able to convince himself he is lying on his back in the garden of their house, cigarette in mouth, clutching the sparrow weight of his wife’s hand in his.

Then he sees it. Through the porthole above the navigation console, a brief glimpse of ghostly white bulk moving in the beam’s golden glow. Death has come for him. Fear has given it form. His quickening breath thrums the limited air.

Without room enough to drop to his knees, he removes his shoes, folds his socks, brings both legs up beneath him on the seat and puts his hands together in prayer to a God he’s never believed in. Plagued by visions of his skeleton found genuflecting, he flops back on the chair and fumbles through his pockets for a lighter. If he is ever found they’ll understand: in his final moments, this sucker didn’t bow to a higher being out of fear. Oh no. He smoked a deliciously woody cigarette instead. He was his own God.

No lighter. He murmurs a prayer half remembered from school, loathing himself more with each line.

A thud throws him against the panel to the left, smashing his head against the defunct power lights, then to the right, where he breaks a tooth on the hatch lever. The coppery taste of blood floods his gums.

Through the glass, another sight of the beast that has come to claim his soul. But now he sees; it is not death after all.

Instruments record that when Cole’s craft chances on the goose-beaked whale, it is exactly two hundred miles west of Perth, Australia. Confused by the sonar’s gentle whinny, the curious whale catches its tail in the elbow of the craft’s mechanical arm, thrashes, then, distressed, its heart overwhelmed and in arrest, rises to the surface, taking with it the submersible and, inside that, the professor.

The whale is dead by the time the craft bursts out of the sea, and Cole’s veins fizz, not with the bends, but with his good fortune. His wife of forty-four years will never read the words I love you. I always have. I always will, hastily scrawled on the back of a crumpled cigarette packet.

He opens the hatch and gulps down lungfuls of briny sea air. Beside him bobs the whale’s carcass. Wave spray cools his face.

Peeling free his sweat-sodden overalls, he shoots a flare into the early evening sky, watches the sparks scatter a fly-past of gulls. Soon, on the endless horizon, where the blues of water and sky are hazily sewn, his ship comes into view. For twenty glorious minutes he observes the dish of a giant orange sun drop behind it, collapsed in ecstasy. He is alive.

The professor’s team sling ropes from the side of the boat, averting their eyes as his near-naked body, chalky white, climbs the dull grey steel of the hull. A young woman drapes a towel over his shoulders. He forgets, though only for a moment, that they are professor and student, enough that he wants to kiss the fullness of her smile.

‘You’re safe, Professor Cole,’ she says. A part of him he’d never let her see wants to cry, but he swallows it and snarls at nothing in particular. The young woman looks at her colleagues in confusion.

‘Bring it aboard,’ he says.

‘Of course the whale! What else would I mean? The bloody ocean?’

So chains clank, cogs grind, a crane swings. Two hours pass and it’s aboard. It’s the longest and heaviest goose-beak he’s ever seen, that much is clear from a cursory glance. While they dwell at depth – deeper and for longer than any other mammal – he’s never heard tell of a goose-beak at 10,000 feet before. He is interested to know what it dives to eat. An observation of new behaviour may at least help assuage the guilt he feels for his role in its death. How much longer might it have lived if he’d been content with never knowing what’s not ours to know?

He cuts its belly open with the blade of a crude machete. Thick crimson blood washes the deck. And there it is, amid the gore and the pungent swirls of steam somehow pretty. Battered shapeless, corroded by acids but intact; the black box recorder of flight PS570: a memory entombed in metal.

Nobody knows where or when the whale swallowed it, how far it travelled or whether it will still work, but it has long left behind the plane that carried it and 316 people into the water on a clear evening in May, three decades before.

Until this moment, flight PS570 had earned its place in folklore as the plane that simply vanished from the air. They call it ‘The Long Forgotten’. Few but the bereaved and their children remember the actual facts of the case: the dead, the fruitless search and the many years it lasted. But Cole’s endeavour has been rewarded with a quite unforeseeable prize, for when the handsome, silvering professor triumphantly lifts the flight recorder into the air, memories come flooding back.