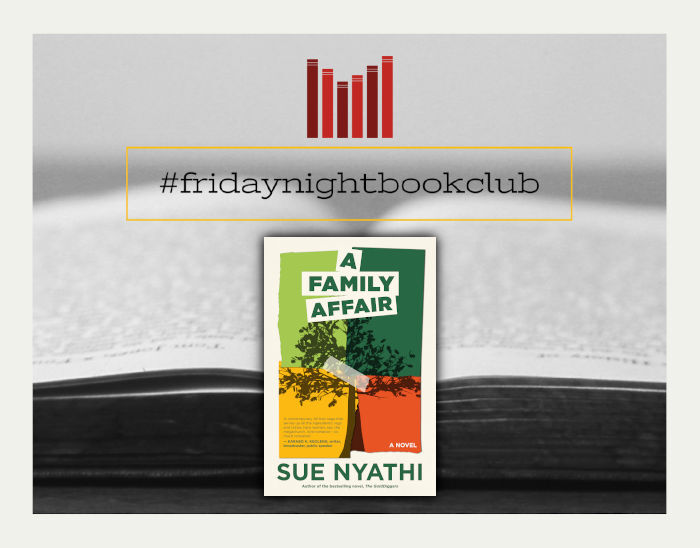 Get comfortable this evening with a glass of wine and an excerpt from A Family Affair, the new novel by Sue Nyathi!

From the bestselling author of The Polygamist (2012) and The Gold Diggers (2018, longlisted for the prestigious Dublin Literary Award as well as the Barry Ronge Fiction Prize) comes a contemporary African saga that captures the complexities of family, culture and the societal constructs that surround women.

Meet the Mafus, a close-knit, traditional family with three daughters. As leaders of their church, The Kingdom of God, Pastor Abraham and his wife Phumla are guiding the community of Bulawayo in faith while trying to keep the different branches of their family intact.

Independent and feisty Xoliswa returns home, after a hiatus abroad, hoping for a fresh start and a chance to steer the family business; rebellious Yandisa has met the love of her life and is finally getting her act together; while dutiful newlywed Zandile is slowly becoming disillusioned with her happily ever after.

The Mafus always present a united front, but as their personal lives unravel, devastating secrets are revealed that threaten to tear the family apart. For how long will they be able to hide behind the façade of a picture-perfect family?

‘Sue Nyathi is a powerful literary force. A Family Affair exquisitely captures the complexities of family, culture and the societal constructs that surround women. Eloquent, evocative and utterly engrossing.’ – Desiree-Anne Martin, author of We Don’t Talk About It. Ever.

The joyful voices follow Zandile as she gets into the car, the flowing train of her dress occupying its own space on the seat next to her. Yandisa goes back into the house and reappears armed with a vanity case in one hand and a bottle of champagne and long-stemmed glasses concealed in a gift bag in the other hand, away from the hawkish eyes of the matronly lot. Their oldest sister, Xoliswa, has already settled herself in the driver’s seat and Yandisa sits in the passenger seat next to her. Zandile is comfortably reclined in the backseat, relieved to be out of the limelight. Through the open window she spots their mother. Even though her face is shielded by a huge peach hat adorned with a big bow and dramatic feathers, she can see a lone tear streaming down her fat cheek but it still doesn’t obliterate the smile that fills her face and extends all the way to her gold-adorned ears.

‘Mom is so happy!’ says Zandile.

‘Of course she is. At least one of her daughters made it down the aisle,’ replies Yandisa flippantly.

‘Because marriage is such an achievement!’ pipes up Xoliswa, in a tone slightly shaded by sarcasm.

The weight of her remark is lost on Zandile whose face is lit up with a radiant smile. She is happy to be surrounded by her siblings on this auspicious day; it has been years since they have been all together, in one place, at the same time. She is appreciative that her wedding day has brought them all together. X, Y and Z. She is the last born of the daughters and arrived during the fruitful years when the family fortune had been secured. Her sisters were born in the barren years in the turbulent 1970s when their father was still trying to establish himself. Xoliswa made her debut into the world in 1972 and at that time their parents occupied a humble abode in the township of Makokoba. Yandisa had followed three years later and Zandile was born in 1978. Many agreed that the name Zandile was befitting because the absence of a male heir was conspicuous in the all-girls Mafu household. The expectation had always been that their mother would try for the proverbial male child but she never did. She was emphatic that nothing came after ‘z’ in the alphabet.

‘How are you feeling?’ asks Yandisa, taking her sister’s hand.

She laughs nervously and feels her gut coil and unwind in slow motion. She has felt like this since she woke up that morning, nervous and happy all at the same time. Yandisa responds by pouring her some champagne in one of the long-stemmed glasses she brought in the gift bag. Zandile accepts the drink and gulps it down greedily.

‘I’ll have one too!’ says Yandisa.

‘You are on bridesmaid duty,’ scolds Xoliswa. ‘No drinking on the job!’

Yandisa sticks out her tongue and reaches for a glass anyway. Behind her back, they call Xoliswa ‘Deputy Mother’ because she’s always trying to whip them into line with her remonstrations.

The engine purrs to life and the car lurches forward as they begin the journey to the church. The ceremony is taking place at the Roman Catholic cathedral in the middle of town and not at their father’s church. Zandile is pleased and loves the historical cathedral building with its high ceilings and stained-glass windows and biblical images. Catholic churches have so much character, unlike the hall her father built for his congregation. Her admiration of buildings led her to pursue a degree in architectural studies. She still has to complete her professional exams before she can call herself an architect but the pursuit of a professional qualification has been put on hold for the qualification of marriage.

In all the chaos and planning for the wedding, she had hardly had a chance to chat to her sisters. She had flown in from the British Virgin Islands five days earlier to find the house crawling with relatives who constantly needed to be fed. They were all on full board; bed and breakfast, lunch and supper, with all the frills in-between. There hadn’t been a quiet moment, or a dull one for that matter and it had been a constant rush doing last-minute things. Unbeknownst to her, someone had forgotten to take the candles to the church and the décor people had been calling non-stop to say the flowers hadn’t arrived at the venue. But her sisters made sure she was none the wiser when it came to those details.

Zandile lets Xoliswa’s question linger in the air before responding and thinks back to the day she met Ndaba. Ndabenhle Khumalo came into the Bulawayo City Council, where she works in the building permits department, to get building approval for a home he wanted to build in Burnside. She took one look at his plans and had redrawn them for him, knowing her talent would eventually get her a job in the planning department. At thirty-five, he was much older than her and had an air of sophistication about him which she later learned was because he had lived overseas for a while. She was only twenty-two when they started dating and her mother had always been concerned that he had a wife.

‘What has he been doing all these years?’ she would ask Zandile.

‘Establishing himself,’ she would answer vaguely.

Zandile is in complete awe of Ndaba and her tummy still feels like it is doing flick-flacks when he looks at her. When he touches her, she feels a hotness spreading to her loins and she blushes unabashedly. Her sisters don’t believe her when she says they haven’t done the deed yet but theirs has been a whirlwind romance. They only dated for six months before he proposed to her on her 23rd birthday. The last six months have been spent planning their wedding. It is also the time their relationship has really been tested the most.

I love Ndaba. I love him a lot. He is smart, he is funny and he makes me laugh. I can talk to him about anything and everything. He is my best friend. He is very generous and considerate. There is nothing in this world that he wouldn’t do for me. He adores me, he spoils me. He pays for everything, even if I have my own money. I have his bank card and I can spend his money on whatever I want. He is protective over me but he is also very jealous. I see it when I talk to another guy. He won’t say anything but I see how he clenches his jaw or his brow furrows. When we fight he doesn’t scream at the top of his lungs. If anything, I am the one who starts shouting. I know sometimes I test his patience a lot. He is patient. Very patient. He can get mad at me at times but he doesn’t stay mad for long. This is good because I sulk. He isn’t too fussy about a lot of things. He is hardworking. He is very ambitious. He will be able to provide well for me. He will be able to give me a good life. He will take care of me. I feel secure with him and that is a good feeling. I cannot imagine being without him. I cannot imagine him not being there to share the ups and downs of life with me. I don’t know if that makes him the one but he is the one for me.

‘I guess you just know,’ answers Zandile, with a lazy smile, ‘and I prayed about it. I prayed hard.’

‘Please don’t come at me with that heaven-sent crap,’ says Xoliswa glibly.

‘Ndaba wasn’t sent from heaven!’ responds Zandile. ‘I don’t believe God picks a partner for you. He will send people in your direction but you need to pray for discernment. Not everyone who comes your way is good for you.’

Yandisa reaches out and squeezes her sister’s hand tightly. She had been there to witness their relationship from the time the first seed was planted. She watched the flourishing of the first flowers of love until it bloomed and blossomed. Everyone else might have had their doubts about Ndaba but she was convinced of his infinite goodness.

Xoliswa eyes her sister circumspectly through the rear-view mirror.

‘I still think you are making a mistake with this guy. You barely know him!’

‘You could be with someone for nine years and still not know them!’ says Zandile.

‘Exactly. You’ve been dating Thulani for over a decade, what’s stopping you from marrying him?’ counters Yandisa.

‘Maybe I know too much,’ replies Xoliswa flippantly.

They all erupt into laughter. The mood in the car is cheerful again, diffusing what could have become a tense argument. Yandisa turns up the volume on the radio and Celine Dion’s voice fills the air. The sisters start singing along to ‘Because You Loved Me’.

All the cars are festooned with balloons and drive in an entourage to the church. Blaring hooters sound for miles, alerting people of the impending wedding. The congregation hears the bridal party long before the cars start pulling into the car park. They have been anxiously anticipating the bride’s arrival for the past hour. The groom is standing anxiously at the altar, his groomsmen trying to allay his nerves. Even the pianist can’t distract the congregation any more. All eyes are fixed on the door, waiting for the bride’s grand entrance.