Friday Night Book Club: Read an excerpt from The Book Collectors of Daraya by Delphine Minoui – heartbreaking, inspiring and beautifully told
More about the book! 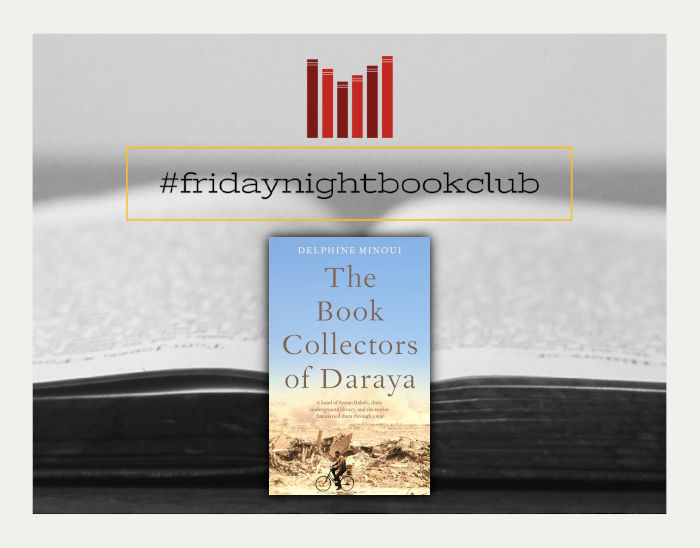 Treat yourself to a glass of wine this evening and this excerpt from The Book Collectors of Daraya.

Based on lengthy interviews with young revolutionaries, conducted over Skype by the award-winning French journalist Delphine Minoui, The Book Collectors of Daraya is a powerful testament to freedom, tolerance and the power of literature.

‘This is an urgent and compelling account of great bravery and passion. Delphine Minoui has crafted a book that champions books and the individuals who risk everything to preserve them.’ – Susan Orlean, author of The Library Book

In 2012 the rebel suburb of Daraya in Damascus was brutally besieged by Syrian government forces. Four years of suffering ensued, punctuated by shelling, barrel bombs and chemical gas attacks. People’s homes were destroyed and their food supplies cut off; disease was rife.

Yet in this man-made hell, forty young Syrian revolutionaries embarked on an extraordinary project, rescuing all the books they could find in the bombed-out ruins of their home town.

They used them to create a secret library, in a safe place, deep underground. It became their school, their university, their refuge. It was a place to learn, to exchange ideas, to dream and to hope.

At first Ahmad is a distant voice coming through my computer speakers. A fragile whisper from a hidden basement. When I first make contact with him on Skype, on October 15, 2015, he hasn’t left Daraya in nearly three years. Located fewer than five miles from Damascus, his town is a sarcophagus, surrounded and starved by the regime. He is one of twelve thousand survivors. In the beginning, I struggle to understand what he is saying. He mumbles, timid but keyed up, his words broken by the omnipresent crackling of explosions. Between detonations, I try to focus on his face. He appears on my computer screen, then disappears, at the mercy of an internet connection patched together from small satellite dishes smuggled from abroad in the early days of the revolution.

His image stretches and deforms like a Picasso portrait: round cheeks slant at an angle under black-rimmed glasses before breaking into a million cubic pieces and fading behind a thick black curtain. When the pixels come back together, I listen carefully and try to read his lips, chewing on my pencil.

Then the revolution. When Syria rouses in March 2011, Ahmad is nineteen, a rebellious age. His father, still traumatized from jail, forbids him to go into the streets. Ahmad misses the first protest held in Daraya, but sneaks into the second one. He joins the crowd, chanting at the top of his lungs: ‘One, one, one, the Syrian people are one.’ In his chest, inside this budding revolutionary, something rips, like a sheet of paper. His first sensation of freedom.

Weeks, then months go by. The protests are unending, too. Bashar al-Assad’s voice shouts menacingly from transistor radios. ‘We will win. We will not yield. We will eliminate the dissenters.’ Regime forces shoot into the crowd. The first bullets whistle, but Ahmad and his friends chant even louder – ‘Freedom! Freedom!’ – as other resisters take up weapons to protect themselves. Unable to imprison them all, Syria’s president decides to put their town under lockdown. It’s November 8, 2012. Like many others, Ahmad’s family pack their suitcases and escape to a neighboring town. They beg him to follow. He refuses – this is his revolution, his generation’s revolution. Ahmad gets hold of a video camera and finally realizes his childhood dream: he will expose the truth. He joins the media center run by the new local council. In the daytime, he roams the devastated streets of Daraya. He films houses ripped apart, hospitals overflowing with the injured, burials for the victims, traces of a war invisible and inaccessible to foreign media. At night, he uploads his videos to the internet. One year of paralyzing violence goes by, full of hope and uncertainty.

One day in late 2013, Ahmad’s friends call him – they need some help. They found books that they want to rescue in the ruins of an obliterated house.

‘Books?’ he repeats in surprise.

The idea strikes him as ludicrous. It’s the middle of a war. What’s the point of saving books when you can’t even save lives? He’d never been a big reader. For him, books smack of lies and propaganda. For him, books recall the portrait of Assad and his long giraffe neck that mocked him from his schoolbooks. After a moment of hesitation, he follows his friends through a gouged-out wall. An explosion has ripped off the house’s front door. The disfigured building belongs to a school director who fled the city and left everything behind. Ahmad cautiously feels his way to the living room, illuminated by a single sliver of sunlight. The wood floor is carpeted with books, scattered amid the debris. With one slow movement, he kneels to the ground and picks one at random. His nails flick against the dust-blackened cover, as if against the strings of a musical instrument. The title is in English, something about self-awareness, a psychology book, no doubt. Ahmad turns to the first page, deciphers the few words he recognizes. It turns out the subject doesn’t matter. He’s trembling. His insides turn to jelly. An unsettling sensation that comes with opening the door to knowledge. With escaping, for a second, the routine of war. With saving a little piece, however tiny, of the town’s archives. Slipping through these pages as if fleeing into the unknown.

Ahmad takes his time standing up, the book against his chest. His entire body is shaking.

‘The same sensation of freedom I felt at my first protest,’ he whispers through the computer screen.

Ahmad cuts off, his face once again a patchwork of pixels. A detonation has interrupted the internet connection. I stare at the screen. I think I hear a sigh. He takes a big breath and continues his story, giving an inventory of the other books found in the rubble that day: Arabic and international literature, philosophy, theology, science. A sea of information in arm’s reach.

‘But we had to hurry,’ he continues. ‘Planes were rumbling outside. We moved fast, dug up the books, and filled the bed of a pickup to the brim.’