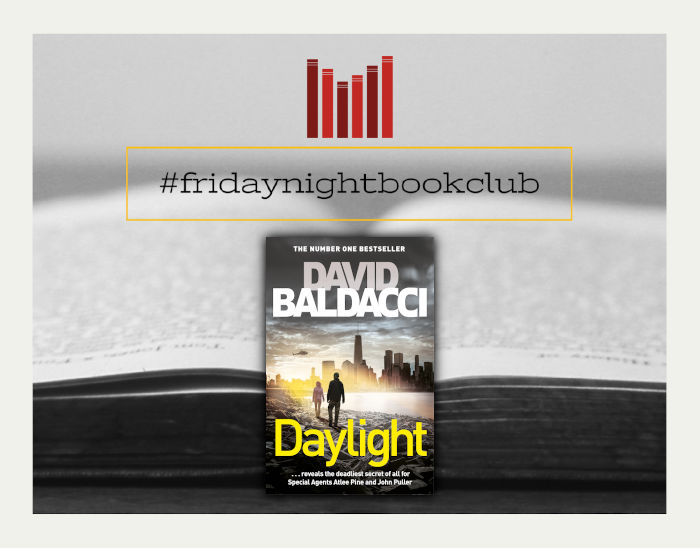 Daylight is the high-octane follow up to Long Road to Mercy and A Minute to Midnight featuring Special Agent Atlee Pine from one of the world’s most favourite thriller writers, David Baldacci.

FBI Agent Atlee Pine’s search for her twin sister, Mercy, coincides with military investigator John Puller’s high-stakes case, leading them both into a global conspiracy from which neither of them will escape unscathed.

Ever since Mercy was abducted after a brutal incident when the girls were just six years old, Atlee has been relentless in her search for the truth. Now, just as time is running out on her investigation, she finally gets her most promising breakthrough yet – the identity of her sister’s kidnapper: Ito Vincenzo. Last known location: New Jersey.

As Atlee and her assistant, Carol Blum, race to track down Vincenzo, they run into Pine’s old friend John Puller, who is investigating Vincenzo’s family for another crime involving a military installation.

Working together, Pine and Puller pull back the layers of deceit, lies and cover-ups that strike at the very heart of global democracy. And the truth about what happened to Mercy is finally revealed.

And that truth will shock Atlee Pine to her very core.

NOW IS THE MOMENT OF RECKONING.

FBI Special Agent Atlee Pine was sitting in her rental car outside of Andersonville, Georgia, with her assistant, Carol Blum, next to her.

‘Pine, how nice of you to call,’ the dripping-with-sarcasm voice said into her ear.

The man speaking was the FBI’s top dog in Arizona, Clint Dobbs. He was the one who had given Pine permission to take a ‘sabbatical’ in order to find out what had happened to her twin sister, Mercy, who had been abducted from their home in Andersonville thirty years before. Six-year-old Pine had nearly died in the process.

‘I understand that you have been extremely busy. You solved a series of murders down there, prevented other killings, nearly got blown up in the process, and discovered something truly remarkable about your past. Hell, the Bureau might owe you a bonus.’

‘I take it you’ve been kept informed through other channels.’

‘You could say that, yes, since you have been remarkably uncommunicative.’

‘Would that source of info be Eddie Laredo?’

Laredo was an FBI special agent who had been sent down to Georgia to help in a murder investigation. He and Pine had a history, a complicated one, but she believed they had resolved things.

‘I have multiple sources keeping me informed. What did you find out about your sister’s disappearance?’

‘When my mother was a teenager she was a mole in a sting operation involving the mob back in the eighties. One of the guys that went down as a result was a man named Bruno Vincenzo, who was murdered after he went to prison. Bruno had a brother in Jersey named Ito. Apparently, Ito found out what happened and blamed my mother for his brother’s death. Somehow he discovered where we were, came down to Georgia, and kidnapped my sister.’

‘Do you have a line on this Ito Vincenzo? Is he even still alive?’

‘I checked the state’s official online database. There’s no record of his death, but he might not have died in New Jersey. I found out that he lived in Trenton. I’ve got the house address. It’s in the name of a Teddy Vincenzo – that’s his son.’

‘Sounds like he might have inherited it, so maybe his old man did die. Maybe he was a snowbird and breathed his last in Florida. If so, he might be beyond your reach, Pine.’

‘I can still talk to his family. They might know something helpful.’

‘Okay, if they’ll talk to you. And where is this Teddy Vincenzo?’

Pine let out a long sigh. ‘In prison at Fort Dix.’

‘Ah, well, crime indeed runs in the family. At least he’s in Jersey. So you want to go to Trenton now? Is that why you finally called me?’ There was an edge to Dobbs’s voice that Pine did not care for.

‘Oh, you don’t, do you? Maybe you and I have a different idea about that, Pine.’

‘I just need a little more time. I got sidetracked by the murders down here. But for that I could have made a lot more progress.’

‘So what you’re saying is that while you’ve been on leave, you’ve actually still been working as an agent.’

‘I agree with you, Pine,’ said Dobbs, surprising her. ‘You did great work down there, as I already pointed out. If it were up to me, I’d tell you to take as much time as you need, but while I’m the top agent in Arizona, I do have people above me, Pine, a lot of them. And there have been grumblings around the Bureau.’

‘I didn’t think I was that important,’ said Pine sharply. ‘And who’s complaining?’

‘Let me point it out then. I’ve got two agents on rotation covering for you in Shattered Rock, even though they’ve got their own assignments. They’re not happy about that because they’ve got no backup, which you apparently enjoy but they don’t. And I’ve also had to redirect admin resources there because Carol’s with you. And while I know this is the twenty-first century, the fact that you are, well, you know…’

‘You mean the fact that I’m a woman, that the guys don’t think I’m carrying my weight?’

‘They think you’re getting special treatment – and, in fact, you are. I’ve had more than a few complaining that they’ve all got problems but they still have to get up and go to work every day, so what’s the deal with you?’

Pine barked, ‘You were the one to tell me to work out this issue if I wanted to keep working at the Bureau. And the only way I can do that is to find my damn sister.’

Dobbs said, ‘I will take into account your natural anger, but just keep in mind who the hell you’re talking to, Pine.’

Dobbs didn’t say anything for so long that Pine was afraid the man had hung up.

‘Funny thing, Pine. I started out in Trenton more years ago than I can remember. It was going through some challenging times back then. It’s going through more challenging times right now.’ He paused. ‘Okay, a few more days. If you need any backup or info, dial up the guys there and tell them Clint Dobbs said it’s okay. They won’t believe you, but they’ll believe it when I tell them it’s true.’

Pine glanced at Blum with wide eyes. ‘Um, I was not expecting that.’

‘I wasn’t expecting to say it, Pine. The offer just popped into my head. But I need to make this point as clear as I can: You have to finish this and come home. You got that? The Bureau pays your salary to work for them. I know I told you to go after this to get your head straight, but at the end of the day that’s your problem, not mine. And you’re not the only agent I have to deal with, okay? I got hundreds of them, and they all got problems. You got that?’

But Dobbs had already clicked off.