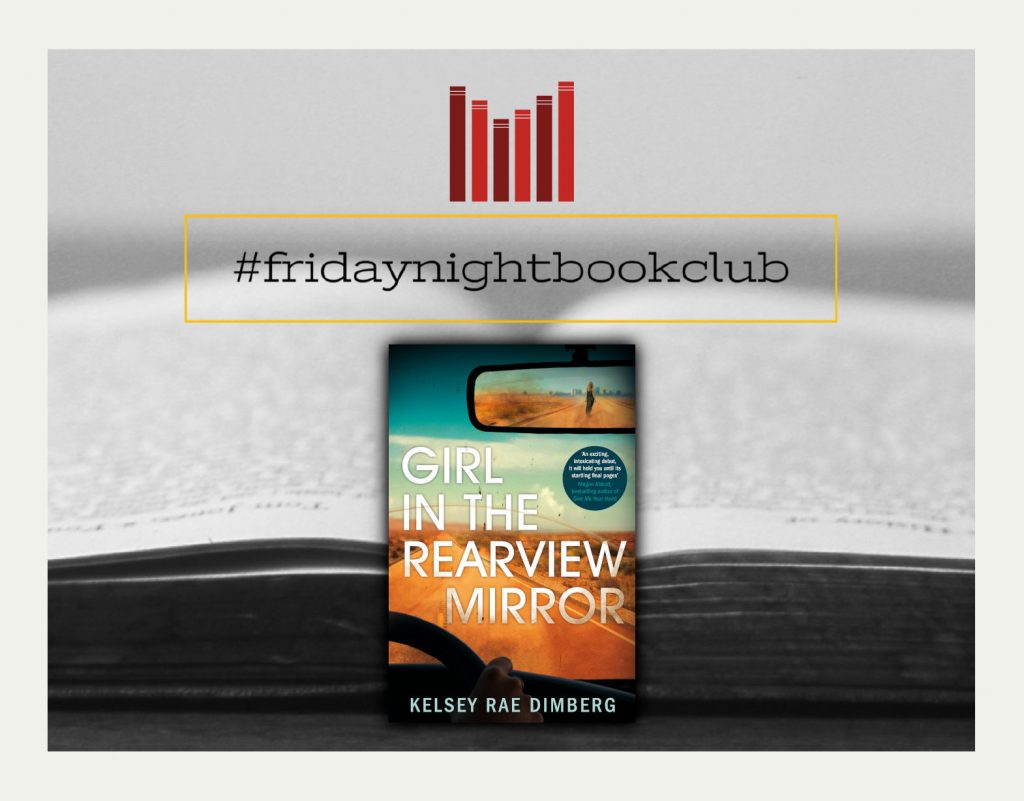 Staying in this evening? Get comfortable with a glass of wine and Girl in the Rearview Mirror, the twisty, page-turning debut thriller from Kelsey Rae Dimberg.

Girl in the Rearview Mirror is a story about privilege and power, family and obligation, ambition and complicity, and the pull of the past on the present.

Desperate to put her past in the rearview mirror, Finn Hunt leaves the Midwest for Phoenix, Arizona, where no one knows her story.

While she’s working a dead-end job, a chance meeting with Philip Martin, son of a prominent US Senator, leads Finn to a position as nanny for Amabel, his precocious four-year-old daughter. Quickly seduced into the Martins’ privileged world, Finn can almost believe she belongs there, almost forget the dark past that haunts her.

Then, in the stifling heat of a desert summer as the Senator’s re-election looms, a strange woman begins to follow Finn, claiming a connection to Philip and threatening to expose the family to scandal. As Finn tries to protect Amabel, and shield the Martins, she’s inadvertently drawn deeper and deeper into their buried secrets.

The family trusts Finn, for now, but it will only take one mistake for everything she holds dear – the Martins’ world, her new life – to fall apart …

Yesterday had been the hottest day of the year, and today was even warmer. Arizona seemed to be moving closer to the sun. If only we’d stayed inside. Instead, I escorted Amabel Martin through the holiday festival.

It was one of those endless summer afternoons when time seems to bend back and repeat itself, like taffy stretched and pulled over the elbows of a giant machine. Amabel and I wandered the midway for hours, buying an invisible dog on a stiff leash, losing a yard of tickets playing games, and drinking cup after cup of lemonade. Heat pressed over the fair as though the striped tents were made of wool. Already five people had collapsed, and a line of ambulances idled behind the grandstand, waiting for the next. Volunteers distributed bottled water compliments of ‘Senator Martin – Your Senator!’

All afternoon, Amabel had fixated on the Tilt-A-Whirl, nagging to ride until I gave in. Her head just cleared the height requirement. Gloating, she raced to a cart, and now sat impatiently, kicking her legs. Her cheek sparkled with a painted flag, stars rendered in silver glitter. At four years old, she was already a beauty, with a bossy, charming face and strawberry blond hair.

On the sidelines, one of Senator Martin’s men – a Snoop, as Amabel and I called them – chewed his gum impassively, like a man at a bus stop. A curly white cord snaked from his ear down the stiff collar of his polo. Amabel waved at him with her arm stretched straight. Snoops had shadowed her all her life; the Senator had been in office for decades.

With the scream of a guitar riff, the Tilt-A-Whirl jerked into motion. The seats lifted and began to glide, first in one direction, then the opposite, still slowly enough for the dizziness to feel pleasant. A breeze swept our hair.

Amabel wriggled beside me, giddy, as we waltzed by other carts. Then, abruptly, she gasped and tried to stand, pushing at the lap bar.

I snatched her waistband. ‘Sit down!’

She pointed, jabbing the air. ‘That girl – she’s following me!’

Our cart spun, more quickly now, with a sick zip of acceleration.

‘What?’ In the direction of Amabel’s finger were two carts, one holding a trio of boys, the other with its back to us.

‘The one with the red hair!’ Amabel’s voice was shrill.

The second cart spun, and I caught a glimpse of a young woman – maybe a teenager – with long bare legs and bright hair. She was riding alone.

We sailed backward and slammed into a turn. Amabel squealed. The force of the spin pressed her legs into mine, and her face was flattened and distressed.

I squeezed her hand. ‘It’s almost over.’

Amabel scowled, resenting being babied. She craned at the carts sailing by, a hectic impression of shirt patterns and white faces. The music was so loud it felt physical, like someone breathing on my neck.

Finally, the song ended and the ride drifted to a stop. The slouching attendant began releasing the safety bars. People streamed away.

When our bar was lifted, Amabel darted to the exit.

She pointed to a teenager moving with the flow of disembarking passengers. The girl was striking. Bright, tomato-red hair fell down her back, contrasting with her milk-pale skin. She wore a short white dress and aqua cowboy boots. We reached the exit at the same time she did, and she stepped back to let us go ahead, smiling blankly, though Amabel was gaping. An intricate tattoo of flowers climbed her bicep. No – face paint, with a heavy dose of glitter, like Amabel’s flag.

We filed down the stairs and I took Ammy by the shoulders to keep her clear of the crowd. The midway was packed, people carrying corn dogs and typing into their phones and pointing at Uncle Sam striding past on stilts. Around us, spinning rides filled the periphery of my vision with color and motion. The racket of shouted conversation and tinny carnival music thickened the air like soup.

My head pulsed, and I knelt beside Amabel to ask what she wanted to do next. Her lower lip shook.

‘You didn’t believe me.’ A fat tear rolled down her cheek, blurring the flag.

‘About the girl?’ I glanced around, but in the chaos, the redhead had vanished. ‘We ran right into her, and she didn’t notice us.’

Amabel sniffled, smearing her hand across her nose. She was imaginative, always inventing stories in which she played a starring role. Being followed, being kidnapped, being rescued – these were her current obsessions, influenced by a library of princess movies she knew by heart.

I pulled a napkin from my pocket and dabbed at her eyes. Her skin felt feverish. ‘Why don’t we take a break?’

We bought Italian ices and settled at a picnic table in the shade of a striped tent. Misters sprayed a haze of water that evaporated as it hit our skin, deliciously cooling.

Amabel shook her head, giggling. In a stage whisper, she told me the redhead had trailed after us all day: had her arm painted as Amabel got her face painted, rode the Ferris wheel with us, stood behind us at the puppet show.

‘It’s probably a coincidence,’ I said. ‘Do you know what that means? It’s when something seems important, but really just happened by accident.’

Amabel frowned. ‘No! She was staring at me.’

‘She was looking at your beautiful flag.’ I touched her cheek. Her skin had cooled. I unfastened her ponytail and gathered the loose hairs.

Ammy squirmed. ‘I saw her before. At the restaurant,’ she said, pronouncing it rest-oh-want.

My hands slowed. I leaned to see her face. It was smooth, innocent, her lips faintly parted.

‘At your dad’s restaurant?’

Sensing she had my real attention, Ammy knelt on the picnic bench and shimmied. ‘Yep!’

‘Sit still,’ I said, arranging her hair again. ‘When was this?’

She shrugged. ‘We were eating ice cream.’

I looped her ponytail through the elastic band and patted her to sit back. I scooped the soft, slushy layer from the top of my lemon ice. Its tartness puckered my mouth. In the blur of summer, I couldn’t remember when we’d last visited The Grove. I hadn’t noticed any girl. Maybe she worked at the restaurant, but I knew most of the waitresses, and she’d seemed too young.

Amabel tipped her cup back and swallowed the last drops, coming away with a sticky mustache of juice.

‘Do you remember when we talked about knowing when to stop playing a game? It’s okay to tell stories as long as you stop when we ask you to.’

‘I still think it’s a coincidence. But if you see her again, you tell me right away. Promise?’ I held out my hand, and she latched her pinkie in mine.

I scanned the tent, packed with heat-strained adults and riled kids. I didn’t see the redhead girl, or anyone else, watching us. The Snoop stood a few yards away, legs planted wide.

Ammy must have had a rough morning, scolded and rushed, the Martins tense about the long day ahead. She was just jealous of the attention the Senator was getting.

‘We have a little time before the fireworks,’ I said. ‘Let’s do something fun.’

Amabel ran to the carousel and climbed onto a purple unicorn. As we circled, the ride bobbing gently, mothers held their palms out, ready to catch their children if they fell. The only danger here was artificial, like the slingshot ride across the way, currently shooting a pod in the air that plummeted to earth, bouncing and tumbling on its bungee. Delighted screams fell down to us.