[Free webinar] Join Philippa Garson, Mondli Makhanya and Marianne Thamm for the launch of Undeniable: Memoir of a Covert War (26 June)
More about the book! 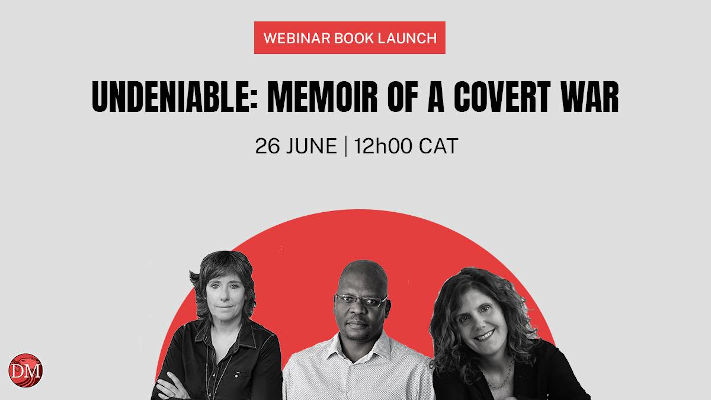 Jacana Media and the Daily Maverick invite you to a free webinar book launch for Undeniable: Memoir of a Covert War, with Philippa Garson, Mondli Makhanya and Marianne Thamm.

In the early ’90s, in the build up to the 1994 elections, South Africa was gripped by spasms of bloody violence as the political landscape changed with the unbanning of the ANC and other organisations. The equivalent of a civil war, aided and abetted by paid agents of the state, raged through the townships of the Vaal Triangle and the East Rand. The state blamed ‘black on black’ violence but the hand of a third force was visible and evident. Philippa Garson, a young journalist with the then Weekly Mail, alongside her colleague Mondli Makhanya found themselves in the thick of it.

Garson’s recently-published book, Undeniable, is a detailed and honest personal account of a time that has not yet been fully recounted and highlights the role of independent media in exposing the cynical political manipulation of those who sought to derail peace.

Philippa Garson worked for the brave and upstart Weekly Mail during the early 1990s, where she covered the civil war between Inkatha and ANC-aligned communities. Undeniable is an account of that period of her life, where she and colleagues, Mondli Makhanya, Kevin Carter, Eddie Koch, Anton Harber and others, tracked and discovered the involvement of a Third Force, which was fuelling the killing frenzy.

Mondli Makhanya, who is currently the editor-in-chief of City Press, has been in the media industry for more than 26 years. He is one of South Africa’s most respected editors and an influential columnist. Makhanya’s insights on South Africa’s political and social developments are much sought after. He is a regular speaker at public and private events and is frequently invited to speak on panels across a range of topics.

Marianne Thamm has toiled as a journalist/writer/satirist/editor/columnist/author for over 30 years and currently holds the position of assistant editor at Daily Maverick, since 2014. She has published widely both locally and internationally. It was journalism that chose her and not the other way around. Marianne would have preferred plumbing or upholstering.