‘First thing you have to remember is that there was a time before time.’ – Read an extract from When We Were Birds by Ayanna Lloyd Banwo
More about the book! 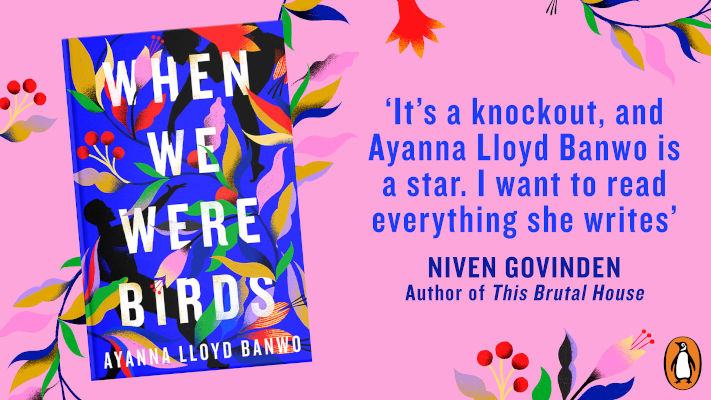 Penguin Random House has shared an excerpt from When We Were Birds — Ayanna Lloyd Banwo’s gorgeously immersive, mesmerising and life-affirming literary debut – a love story and a ghost story set in modern-day Trinidad.

Darwin is a down-on-his-luck gravedigger, newly arrived in the city of Port Angeles to seek his fortune, young and beautiful and lost. Estranged from his mother, he is convinced that the father he never met may be waiting for him somewhere amid these bustling streets. Meanwhile in an old house on a hill, Yejide’s mother is dying. And she is leaving behind a legacy that now passes to Yejide: the power to talk to the departed. Darwin and Yejide’s destinies are intertwined, and they will find one another in the ancient cemetery at the heart of the city, where trouble is brewing and destiny awaits …

Embedded with a timeless, mythic magic, and yet alive with a fresh, modern sensibility, this hypnotic literary debut is a masterpiece of rhythm, exuberance, heart, loss in cycle with renewal and darkness with light: a reckoning with a grief that runs back generations and a defiant, joyful affirmation of hope.

‘First thing you have to remember,’ Granny Catherine hold her granddaughter, Yejide, close on her lap, ‘is that there was a time before time.’ She press the first layer of tobacco down into her ebony pipe. The flame from her silver lighter make a small blaze in the cavern of the bowl and the pipe settle between her lips. ‘Before we come to live in this house, before the settlement in the valley, before the quarries, when the forest was so thick that no man could cross it, Morne Marie was the home only of animals. But not like animals we see now, oh no!’ Catherine open her eyes wide and the blue smoke curl out of her nostrils. ‘The ocelots was big like tigers, the deer run so fast that no man could catch them even if he dare enter the forest to hunt them, and the little green parrots that sing at dusk was as big as the blood-red ibis that live in the swamplands. The animals could talk to each other, just like I talking now, and they build a mighty city in the forest. But this city was nothing like Port Angeles. It had no buildings, no boundaries, no gates, and the animals live together without territory to guard and borders to mind.

‘But one day a warrior wander into the forest. He see that it full of animals to hunt and fruit to eat. When he look at the trees he only see the houses he could build, and when he look at the land he only see what he could take. The animals try to talk to him and tell him that there was so much more there than what he could see, but he did not know their language and so could not understand them.

‘But the animals fight them, right?’ Yejide squirm on her granny lap. Nothing she love more than this full-cupboard feeling: the sweet smell of tobacco, the even rhythm of the rocking chair, the green hills and her granny face brimming with story. She think of the sharp teeth of the ocelots and the tight grip of the macajuel that could suffocate a man in its coils; no way any human with just two legs, very small teeth and no poison at all could ever defeat the wild animals of the forest. Catherine look at her and puff on her pipe. ‘Who telling the story, you or me?’

Yejide grin and quiet down again.

‘The animals had always live in peace, but they know then that it was time for war. The battle rage bloody and terrible. The quarry you see there’ – Catherine point out the window to the deep, brown crater on the hillside – ‘was where the animals make a stand in a battle so fierce that it leave scars on the mountain.

‘All that killing cut the forest deep. Wounded, it went into mourning and that bring the longest dry season ever on Morne Marie. The rivers hide in the earth and the trees wilt and die away. The ocelots shrink small like house cats, the howler monkeys get timid, and the deer and manicou and lappe, who had live in peace before, start to look at each other and see food. The warriors suffer too, for no one, man nor animal, could survive when nature decide to withhold its bounty.

‘Then one day when all were weary, and it look like the war would claim not only the fighters but the whole forest, a great storm set up in the hills. Fat, grey clouds empty out into the green and the men and animals rejoice to see the rivers rise again, and the forest drink deep of the rain. Thunder and lightning pelt down for three days and three nights. But remember I tell you, this was a time before time, when a tree could reach full-grown in a day and a boy could reach manhood in a night, so this storm was longer and fiercer than any of the animals had ever see before. The earth slide down the hillsides and crash into the valley below. Trees older than any animal could remember lose their hold on the earth and topple over. The rivers burst their banks and rush over the land. Rejoicing turn again to sorrow. It come like the whole forest turn on them and demand its share of the lives who defile its sacred places with war.

‘Now, the green parrots, the ones who cackle and sing and chatter, just like you’ – Catherine pinch Yejide lips together to stop her from giggling – ‘well, they were wiser than any of the animals give them credit for. The parrots watch the rain and watch the hills and watch the rivers and watch the dead pile high. They gather together in the branches of the last sacred silk cotton tree and hold a council. At the council’s end, the parrot battalion split and divide in two. One half fly to the east and the other half fly to the west.

‘The parrots that went west get small and become the little green birds we see today, those that sing and fly toward the setting of the sun. But those that went east toward the sunrise mute their green feathers to black and curve their beaks into sharp hooks. Their bodies get fat and their wingspan stretch so wide they darken the land below them as they fly. They release one last great song that make all the animals and men tremble, then grow grey hoods around their heads and necks that silence their throats forever.

‘You know what they turn into, Yejide?’ Catherine stare out the window, smile and puff on her pipe.

‘Corbeaux!’ Yejide cry out. She love getting the right answer. No matter how many times she hear the story, knowing the answer always make her feel grown up and very important.

Catherine nod and pull deep from the pipe. ‘When the change was complete, they feel their bellies get hungry for flesh. They spread their wings wide and circle the land slow, searching out the dead. And with their new long, curved beaks and talons sharp like caiman teeth, they tear into the flesh of the animals who was once their friends and the men who was once their enemies. When they done, they take to the silk cotton tree again, leaving nothing but bone.

‘The living look on in horror to see the devouring of the dead. They don’t understand how the birds they once knew could do something so terrible. But the chattering parrots they knew were gone. They turn into something else entirely now. When they shed their green and change their form, they take on a sacred duty – to stand at the border between the living and the dead. So they wait for the dying and watch over the carcasses and consume the flesh. And no one but the corbeaux know that inside their bodies the souls of the dead transform and release.’

Catherine lift Yejide off her lap and put her to stand on the wooden floor in her white patent-leather church shoes. ‘Right. Story done. Now make sure and put those shoes away. And your nice dress. Hang it on the back of the chair in my room. Don’t let me come and find that you just leave it anyhow.’

But Yejide know the ritual well. ‘Story not done, Granny. What happen next?’

Catherine look down at her granddaughter. Just now she would be too tall for little-girl dresses, too grown to sit on her lap. But not yet – she reach her hand out and Yejide run back into her arms. Not yet.

‘Well, when the sun rise on the fourth morning of the great storm, when all the corbeaux stomach full and everyone weary with pain and grief, the rain stop. No more flood. Balance come back to the forest. But after they get saved, nobody like to think of who rescue them. In this way people and animals are the same. Everyone begin to fear the corbeaux. So, they fly away to live at the edges of the forest of Morne Marie. They alone know the world changing and it would have work for them in the cities of men to come. And so, like in all the stories that change the world, over time everyone forget that the ending of the storm happen at the same time the corbeaux born. Everyone, of course, except the corbeaux—’ She bend close to whisper in Yejide ear. ‘We remember.’