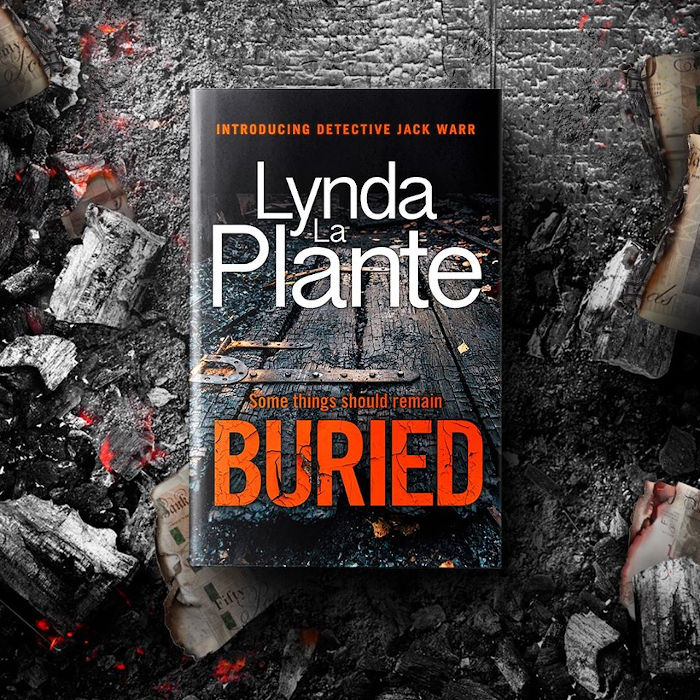 Buried – the first book in a brand new thriller series by the Queen of Crime Drama, Lynda La Plante – is out now from Jonathan Ball Publishers!

A burnt-out cottage, a fortune buried in the ashes – and a body that could solve a decades-old crime …

DC Jack Warr and his girlfriend Maggie have just moved to London to start a new life together. Though charming, Jack can’t seem to find his place in the world – until he’s drawn into an investigation that turns his life upside down.

In the aftermath of a fire at an isolated cottage, a badly charred body is discovered, along with the burnt remains of millions of stolen, untraceable bank notes.

Jack’s search leads him deep into a murky criminal underworld – a world he finds himself surprisingly good at navigating. But as the line of the law becomes blurred, how far will Jack go to find the answers – and what will it cost him?

Lynda La Plante was born in Liverpool. She trained for the stage at RADA and worked with the National theatre and RDC before becoming a television actress. She then turned to writing– and made her breakthrough with the phenomenally successful TV series Widows. Her novels have all been international bestsellers.

Her original script for the much-acclaimed Prime Suspect won awards from BAFTA, Emmy, British Broadcasting and Royal Television Society, as well as the 1993 Edgar Allan Poe Award. Lynda has written and produced over 170 hours of international television.

Lynda is one of only three screenwriters to have been made an honorary fellow of the British Film Institute and was awarded the BAFTA Dennis Potter Best Writer Award in 2000. In 2008, she was awarded a CBE in the Queen’s Birthday Honours List for services to Literature, Drama and Charity.